They had to get a look at this plump punter's robust right arm, too.

“I had a feeling it was going to come up,” said Harvin, the 2020 Ray Guy Award winner as the top punter in college football. “That's another attribute I can bring to the table.” 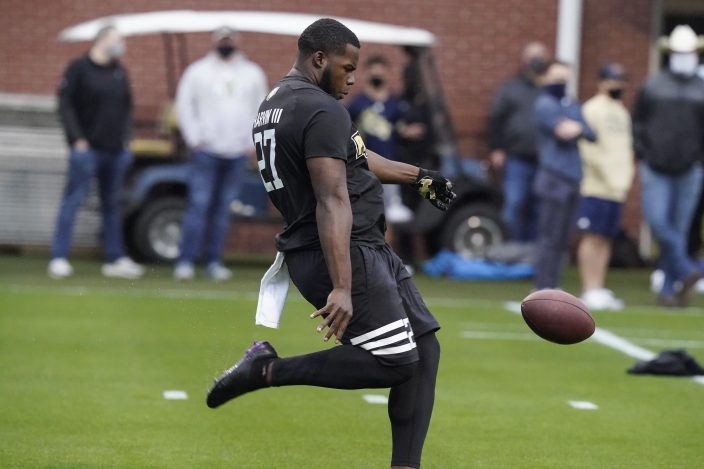 FILE - In this March 16, 2021, file photo, Georgia Tech punter Pressley Harvin III punts the ball during the school's Pro Day football workout for NFL scouts in Atlanta. NFL scouts who gathered for Georgia Tech’s pro day didn’t just want to see 263-pound punter Pressley Harvin boot the ball a mile. They also asked him to throw some passes, and he dazzled them with his arm, too. (AP PhotoBrynn Anderson, File)

Harvin, who packs 263 pounds on his 6-foot frame, set school and ACC single-season records last year with a 48-yard net punting average. He can throw the football just as far and as accurately as he can punt it.

His 43-yard dime to Nathan Cottrell on a fake punt helped the Yellow Jackets beat Miami in 2019. He heaved the pass from his 48 and Cottrell caught it in stride at the Hurricanes 9 before tumbling into the end zone.

“I've always been humble with it because I've never been a cocky guy,” Harvin said. "But just being able to be versatile at punter is a thing that a lot of teams don't have, and I'm thankful to be able to do it here at Georgia Tech these last four years. 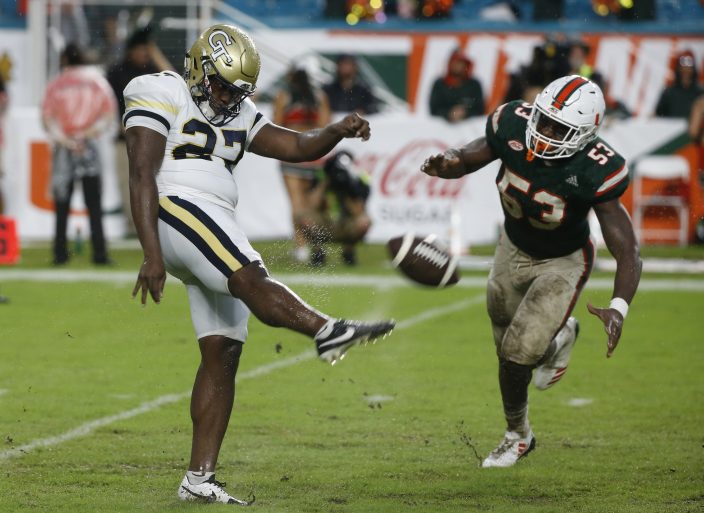 FILE - In this Oct. 14, 2017, file photo, Georgia Tech punter Pressley Harvin III (27) kicks the ball as Miami linebacker Zach McCloud (53) attempts to block during the second half of an NCAA college football game in Miami Gardens, Fla. Harvin, who packs 263 pounds on his 6-foot frame, set school and ACC single-season records last year with a 48-yard net punting average. He can throw the football just as far and as accurately as he can punt it. (AP PhotoWilfredo Lee, File)

“And you know, one of my favorite moments was throwing that touchdown against Miami. That's one of the remarkable things that I can do instead of the ball just hitting my foot, and I try to help the team out in any type of way I can.”

“The biggest thing is he can just flip the field,” Collins said. “And there's the threat of a fake every single time we go to a special teams play. That's another dimension that Pressley was able to bring us.”

Harvin can relate to Denver Broncos kicker Brandon McManus, who despises being called a kicker because he figures he's really just a superb athlete who happens to be great at putting footballs through goal posts.

In Harvin's case, he doesn't want to be pigeonholed as a prototypical punter.

“We have this thing called, ‘punters are people, too,’” Harvin said. "And it's more than just being a punter because I can contribute to the team on more than just fourth down. Whether it's on the field or off. And you have to still be athletic to do it at this level as well as the NFL level.

“You know, I would like to put myself on a depth chart at an ‘ATH’ instead, for sure,” Harvin added, using the nomenclature for all-round ‘athlete.’

Foul weather in Atlanta threatened to keep Harvin from putting on a show for scouts at his pro day last month, but he used the conditions as another chance to prove he's NFL ready.

“I wish it was 75 degrees and sunny but for the circumstances and what the conditions were, it was definitely a good day," Harvin said.

He delighted scouts with his directional punting, his stamina and his ability to play through the cold conditions like he's sure to face in the NFL.

“I knew the directional was going to be one of the most important parts of it because that's what gets you paid in the NFL,” Harvin said. “And what keeps you on teams is: ‘Can you place the ball in this one position that we need you to in order to take the returner out of the game?’

Harvin also showed off the results of his rigorous training that's allowed him to drop 20 pounds from the 283 he played at his senior season.

“The weight I'm at today, I feel a lot more comfortable with,” Harvin said. "I played at that my freshman and sophomore years, but I had more body fat than I do now. I've got a lot more lean mass on me now, a lot more muscle.

“And that's the biggest part is you don't want to lose explosiveness, but how can you transfer bad weight to good weight and be able to help you out a little bit more?”

Collins figures some NFL team is in for a treat when Harvin shows up at its facility this spring.

Yellow Jackets speedy wideout and gunner Josh Blancato said whichever NFL team takes a chance on Harvin will find they're not only getting a big-time punter but a consummate teammate and a natural-born leader.