Brooklyn's Kevin Durant was forced to leave the Nets' game in Miami on Sunday early in the first quarter with a left thigh injury.

Durant exited with 7:57 to go in the opening quarter. He scored Brooklyn's first eight points of the game before coming out, and the team quickly announced he would not return because of what was being called a contusion.

Durant has missed 33 games this season, with 24 of those related to a left hamstring injury. He missed six others in accordance with the league's health and safety protocols related to the coronavirus and three more for injury management. 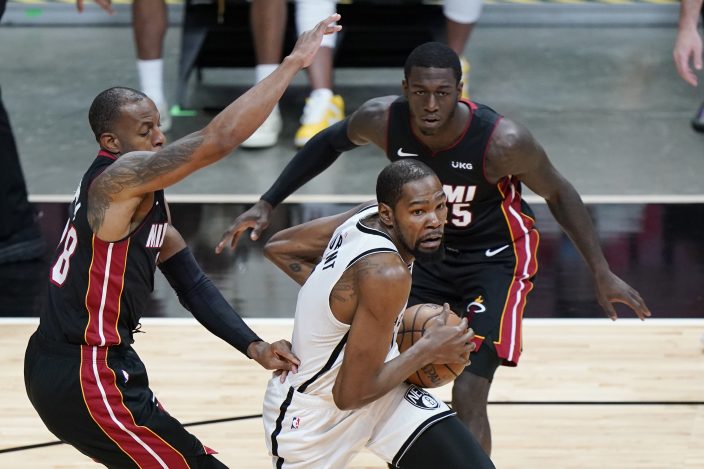 He appeared to be injured on a drive just 1:33 into the contest and missed both free throws — only the second time this season that he went 0 for 2 on a trip to the foul line. He remained in the game for about 2 1/2 more minutes before leaving for further evaluation and ultimately the diagnosis that would keep him out for the remainder of the game.

The Nets were also without James Harden while he works his way back from a hamstring issue.

Miami was playing Sunday without Jimmy Butler, sidelined with an ankle sprain. 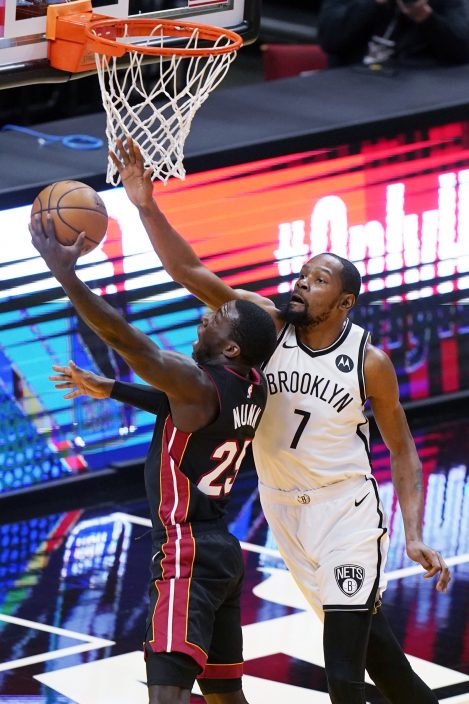 Miami Heat guard Kendrick Nunn (25) goes up for a shot against Brooklyn Nets forward Kevin Durant (7) during the first half of an NBA basketball game, Sunday, April 18, 2021, in Miami. (AP PhotoWilfredo Lee)

Nets' Durant ruled out for Tuesday with thigh contusion