The last-place New York Yankees lost their fifth straight game as Yoshi Tsutsugo hit a tiebreaking double off Gerrit Cole in the seventh inning that lifted the Tampa Bay Rays to a 4-2 win Sunday and a three-game sweep.

Four pitchers combined on the Rays' second three-hitter of a series in which New York managed 11 hits in all.

Cole (2-1) was hurt by slipshod defense that made three mistakes in the third inning alone, two by center fielder Aaron Hicks and one by left fielder Clint Frazier. 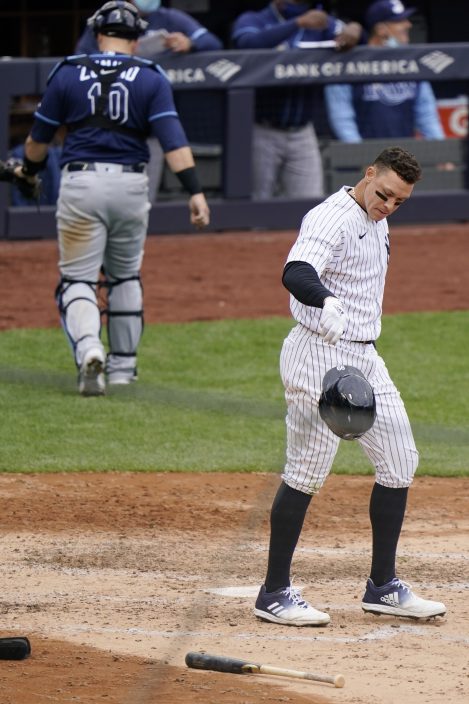 New York Yankees Aaron Judge tosses his batting helmet after striking out stranding two runners on base during the fifth inning of a baseball game against the Tampa Bay Rays, Sunday, April 18, 2021, at Yankee Stadium in New York. Rays catcher Mike Zunino (10) heads to the dugout. (AP PhotoKathy Willens)

One of the three runs off Cole was unearned, giving the Yankees a major league-high 10.

Joey Wendle added a ninth-inning home run off Darren O’Day, prompting more boos from the crowd of 10,606, who saved their loudest jeers for the final out.

Tampa Bay has won 16 of its last 21 against the Yankees, including in last year’s Division Series. 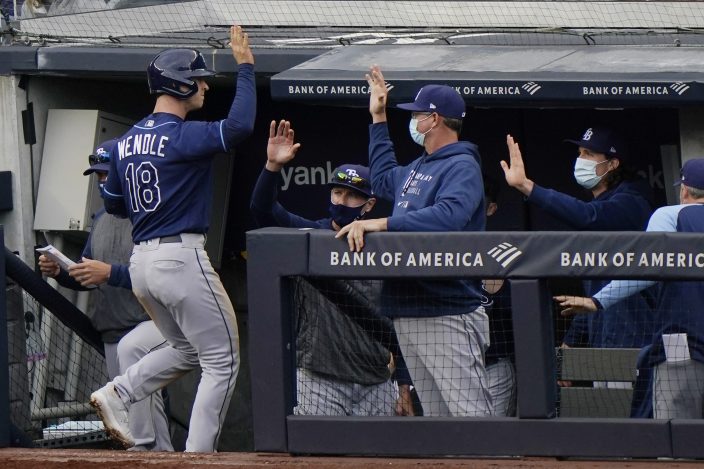 Tampa Bay Rays Joey Wendle (18) is greeted at the dugout after scoring on Yoshi Tsutsugo's RBI double during the seventh inning of a baseball game against the New York Yankees, Sunday, April 18, 2021, at Yankee Stadium in New York. (AP PhotoKathy Willens)

The Rays swept a series for the second time in their last three visits to Yankee Stadium after sweeping just two of their previous 51 series of three games or more in the Bronx. 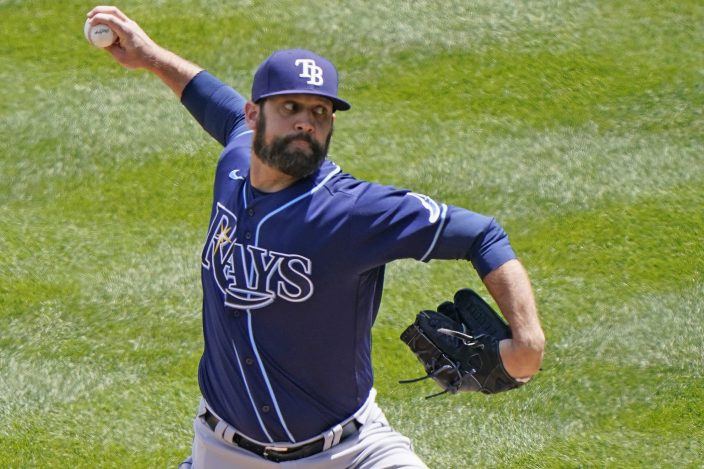 Tampa Bay Rays starting pitcher Andrew Kittredge winds up on a pitch during the first inning of a baseball game against the New York Yankees, Sunday, April 18, 2021, at Yankee Stadium in New York. (AP PhotoKathy Willens)

Ryan Yarbrough (2-1) followed opener Andrew Kittredge and allowed one run and two hits in five innings. Diego Castillo got four outs, and Jeffrey Springs pitched a 1-2-3 ninth for his first big league save.

Cole struck out 10 in 6 1/3 innings and with 39 strikeouts set a Yankees mark for most in his first four starts, with three more than Masahiro Tanaka in 2014.

Cole retired 13 in a row before Wendle singled with one out in the seventh. Tsutsugo followed by driving a changeup, Cole’s 108th and final pitch, to right-center, where the ball bounced to the wall for an RBI double and a 3-2 lead. Tsutsugo was batting .146 at the time and was benched in the first two games of the series. 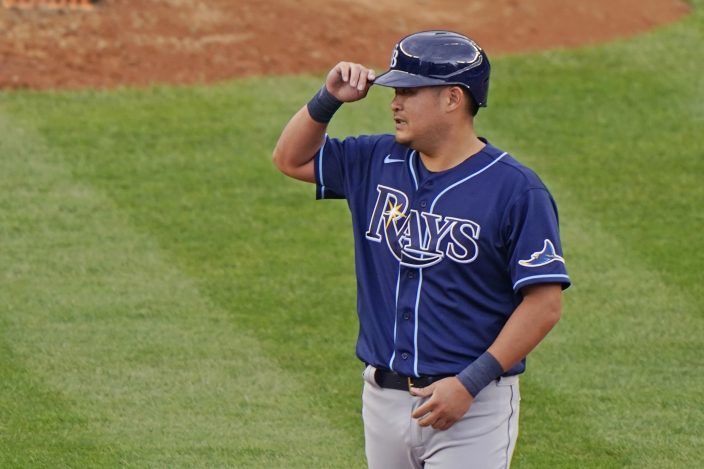 New York had been outscored 25-12 since Cole’s previous start and had not led since the second inning Wednesday against Toronto.

Tampa Bay went ahead 2-1 in the third after Mike Zunino singled leading off. Hicks got a late break on Kevin Kiermaier’s bloop to short center, then bobbled the ball and lost a chance for a forceout at second. Yandy Díaz followed with an RBI single to center, and Hicks allowed the ball to kick off his glove for an error that let Kiermaier take third, sparking another round of boos from the crowd.

Manuel Margot followed by a sacrifice fly that put the Rays ahead 2-1, and Frazier heaved the ball past second as Díaz advanced. 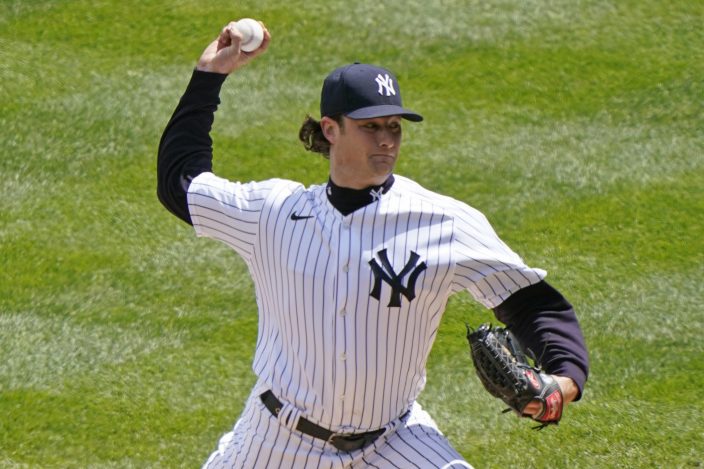 New York Yankees starting pitcher Gerrit Cole (45) winds up on a pitch during the first inning of a baseball game against the Tampa Bay Rays, Sunday, April 18, 2021, at Yankee Stadium in New York. (AP PhotoKathy Willens)

Judge likely saved a run with a tumbling catch on Tsutsugo in right that ended the second with a man on.

New York tied it 2-2 in the fifth. Gio Urshela fouled off a pair of two-strike pitches and poked a changeup to the opposite field and into the right-field corner, No. 9 hitter Kyle Higashioka walked and DJ LeMahieu looped an RBI single into right.

TEARING THE COVER OFF THE BALL

Rougned Odor hit a comebacker hard enough in the fifth inning that the seams on the ball started to unravel by the time Yarbrough picked it up.

Rays: RHP Collin McHugh (low back strain) was put on the 10-day IL and RHP Chris Mazza was recalled from the taxi squad.

Rays: LHP Josh Fleming starts Monday at Kansas City. Fleming is from Bridgeton, Missouri, and is expecting about 12 family members and 25 friends, many of whom have not seen him pitch since 2018 at Bowling Green. “Any time I hear screaming, I’ll know it’s going to be from there,” he said. Fleming’s parents, who will be on hand, were forced by the pandemic to watch his debut on television at a hotel across from Tropicana Field but did attend World Series games.

Zach LaVine insisted he had never ...