Salvador Perez tapped his bat twice on the plate to make sure it wasn't cracked, then sent the next pitch he saw from Toronto reliever T.J. Zeuch into the left-field fountains, breaking open a scoreless game and sending the Kansas City Royals to a 2-0 victory over the Blue Jays on Sunday.

Brady Singer kept the Blue Jays off the board through six innings. Kyle Zimmer (1-0) and Josh Staumont each worked a perfect inning, and Greg Holland finished off the two-hitter for his second save of the season.

Kansas City has won a major league-leading 55 consecutive games when ahead after seven innings. Perez’s two-run shot off Zeuch (0-2) in the seventh inning came one day after his two-out, walk-off homer gave the Royals a 3-2 win and split of their doubleheader. That homer soared an estimated 459 feet, the one Sunday a mere 441.

Kansas City also won the opener Thursday night to take a series from Toronto for the first time since September 2017.

Sunday's game was scoreless through six, but it wasn't so much a pitcher's duel as an exercise in offensive ineptitude. The Royals used a pair of walks each of the first two innings to load the bases against Robbie Ray, but each time he left them that way. They worked two more walks in the third and stranded those runners, and left runners standing on second base each of the next two innings to run their total to 10 through five.

Singer must be wondering whether his teammates like him.

The Royals did not score a single run with him on the mound in his first two starts, and they failed to again despite a solid job against the Blue Jays. Singer allowed just two hits and walked three while striking out six. 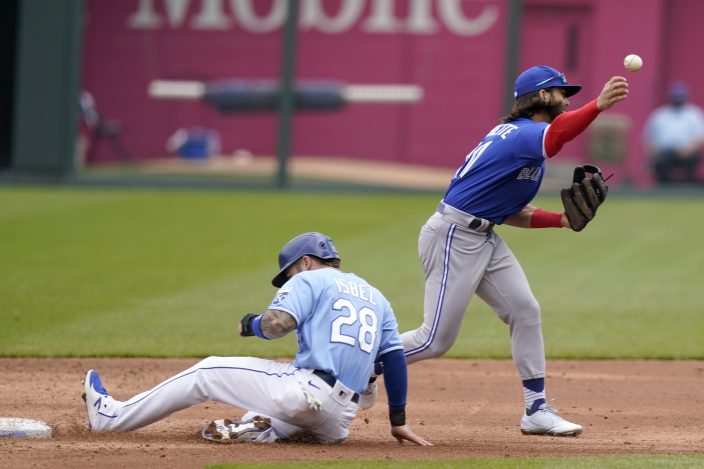 At least he rendered the Blue Jays equally ineffective with runners on base. They left two aboard in the second, runners on the corners in the third and two more in the fourth, keeping the game scoreless even with busy base paths. 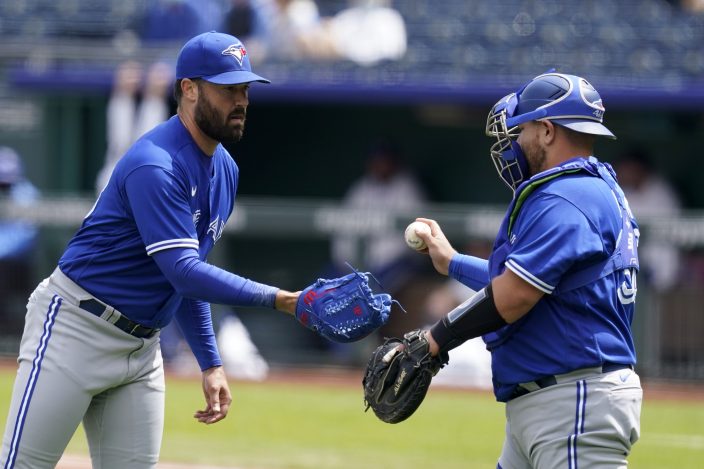 Blue Jays OF Teoscar Hernandez, who tested positive for COVID-19 on Tuesday, is no longer experiencing symptoms and could return April 23 against Tampa Bay. Toronto general manager Ross Atkins told MLB Network he's “ready for baseball” and the club is making sure “he's safe to enter our environment.” Blue Jays RHP Hyun Jin Ryu (1-1, 1.89) will make his fourth start of the season when Toronto plays the first of two games in Boston on Tuesday night. Royals LHP Danny Duffy (2-0, 0.75) will start the opener of a three-game set against Tampa Bay on Monday night needing six strikeouts to reach 1,000 and pass Tom Gordon for sixth most in club history.