Nate Lowe singled with two outs and the bases loaded in the 10th inning, giving the Texas Rangers a 1-0 victory over the Baltimore Orioles on Sunday in a pitcher's duel between a pair of opening starters.

The hit ended a five-game home losing streak for the Rangers and capped a wild extra frame that looked it would start with a lead for the Orioles, who dropped to 6-3 on the road.

In the top of the 10th, with automatic runner Maikel Franco on third base and one out, pinch-hitter Trey Mancini lined a one-hopper in front of right fielder Adolis García.

Baltimore Orioles starting pitcher John Means delivers a pitch against the Texas Rangers in the third inning during a baseball game on Sunday, April 18, 2021, in Dallas. (AP PhotoRichard W. Rodriguez)

Franco, however, held up near third and was thrown out at home when catcher Jose Trevino caught García's one-hop throw just up the line.

Baltimore manager Brandon Hyde had a lengthy discussion with home plate umpire Sam Holbrook, and the crew met briefly before play resumed without a replay. Hyde said he wanted the umpires to look at the play. Mancini was credited with a single.

Franco made a nice tag at third for the first out of the Texas 10th with Eli White trying to bunt automatic runner Charlie Culberson to third. 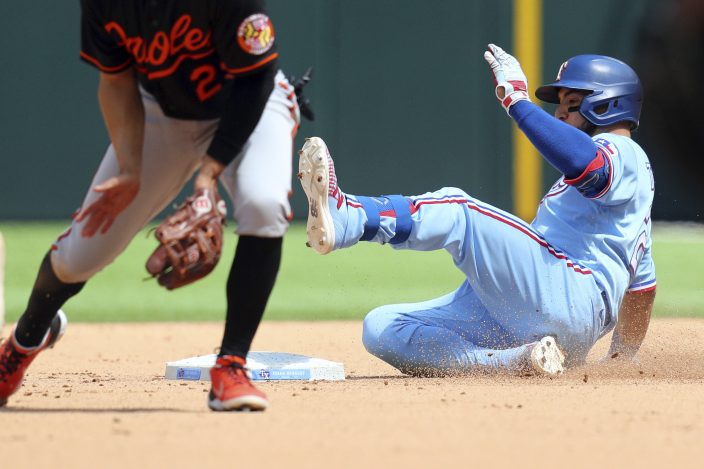 Texas Rangers catcher Jose Trevino (23) slides into second on a double in the fifth inning against the Baltimore Orioles during a baseball game on Sunday, April 18, 2021, in Dallas. (AP PhotoRichard W. Rodriguez)

After two walks on either side of a strikeout loaded the bases, Lowe grounded a single to left against the shift off Travis Lakins Sr. (1-1), ending a stretch of 13 2/3 scoreless innings for the Baltimore bullpen.

John King (1-0) pitched a scoreless 10th for the Rangers.

When he started the top of the 10th at second base, Franco was just the fifth runner to get that far in a game dominated by Texas' Kyle Gibson and Baltimore's John Means. 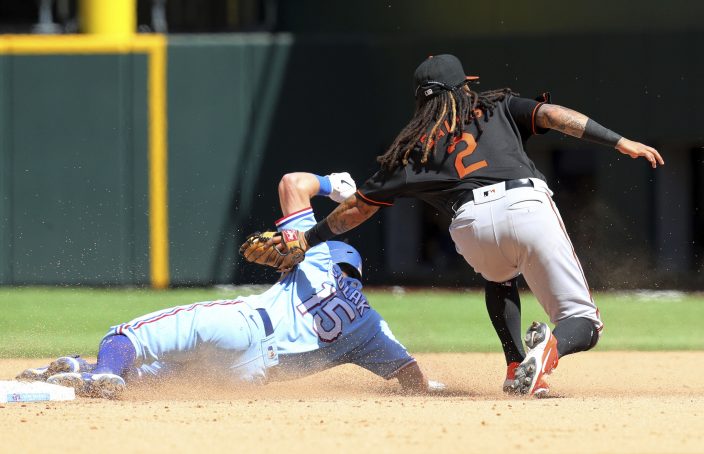 Gibson allowed four hits in eight scoreless innings, striking out six without a walk in the right-hander's third consecutive strong outing since the shortest opening day start in franchise history.

The first four outs for Means were strikeouts, and the left-hander finished with nine Ks and two walks while tossing seven scoreless innings for the second time this season. Means limited Boston to one hit in the opener.

Trevino was the first runner to reach third base in the game with one out in the fifth inning after a leadoff double. But Means struck out Leody Taveras and got Isiah Kiner-Falefa on a flyout. 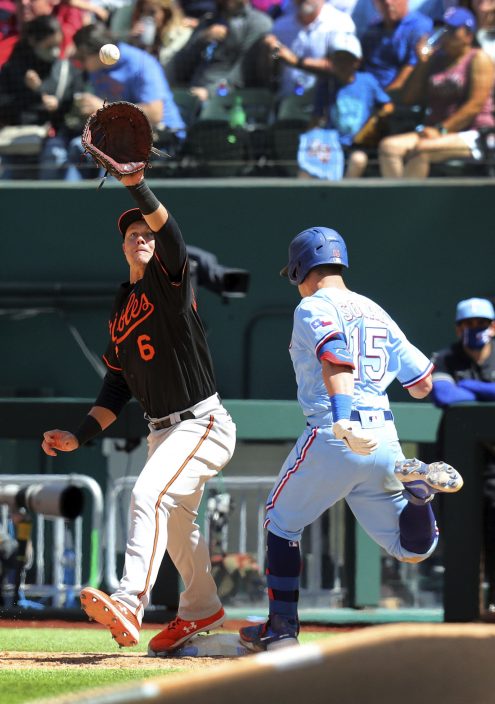 Baltimore right-hander Dean Kremer was sent to the alternate site a day after a solid start in a 6-1 win over the Rangers that followed two rough outings. Reliever Cole Sulser was recalled from the alternate site. Hyde said the Orioles made the move because they only need four starters this week with two days off. ... Texas slugger Joey Gallo, who reached base in each of the first 15 games, was out of the lineup for the first time with the lefty-lefty matchup against Means.

Orioles: RHP Matt Harvey (0-1, 5.02 ERA) is set to start the opener of a two-game series in Miami on Tuesday. Harvey gave up two runs on three hits in a no-decision against Seattle in his previous start. The three hits were the fewest he's allowed since April 2019.

Rangers: RHP Kohei Arihara (1-1, 3.07 ERA) is set for the opener of a three-game series at the Angels on Monday night. LA is the first AL West opponent of the season

for the Rangers. It's the latest into the season (17 games) for the first division opponent for Texas since 2008 (20 games).

Orioles get away from home, win 5-2 at Texas