Matt Olson scored from second base on a fielding error by Detroit third baseman Jeimer Candelario with two outs in the ninth inning, rallying the Oakland Athletics past the Tigers 3-2 on Sunday for their eighth straight win.

Sean Murphy hit a tying home run in the eighth as the A’s swept the four-game series. 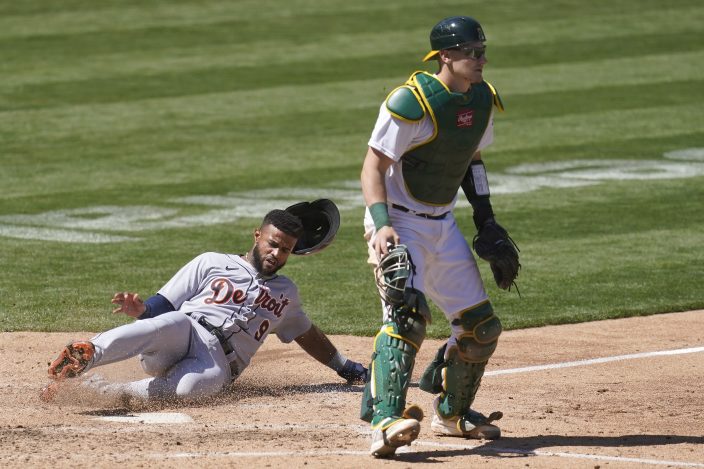 Ramon Laureano had an RBI triple for the A’s.

Harold Castro had three hits for the Tigers, including a two-run single in the sixth that snapped Detroit’s 23-inning scoreless streak, 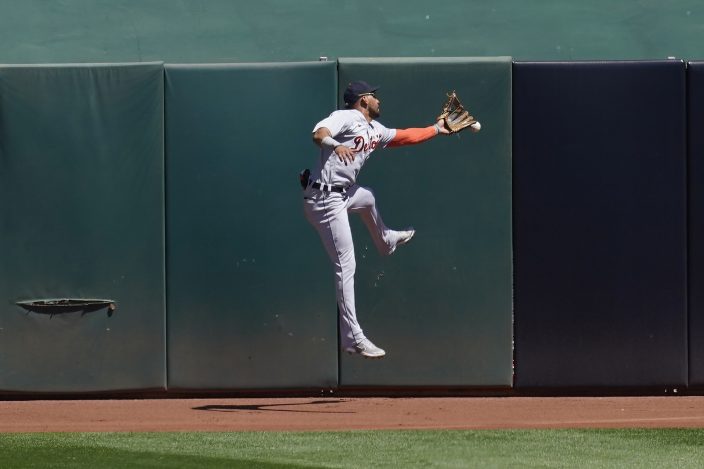 Both starters pitched effectively but left with no-decisions.

Detroit’s Boyd gave up four hits and two runs in 7 1/3 innings. Murphy’s home run was the first off Boyd this season after the lefty allowed an AL-leading 15 in the shortened 2020 season. 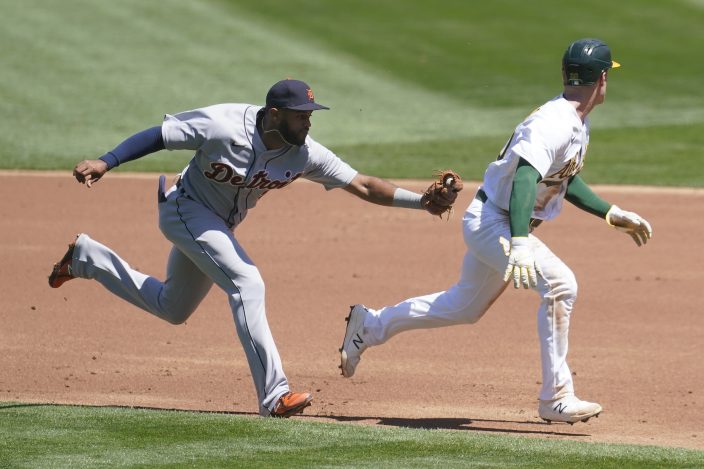 Oakland Athletics Mark Canha, right, is caught in a rundown before being tagged out by Detroit Tigers shortstop Willi Castro, left, during the first inning of a baseball game in Oakland, Calif., Sunday, April 18, 2021. (AP PhotoJeff Chiu)

Bassitt pitched himself into trouble in the first but wriggled out of the jam with a little luck. After Tigers leadoff man Robbie Grossman walked and Candelario singled, Willi Castro lofted a short fly that fell in front of A’s center fielder Laureano. Laureano alertly threw to third to nail Grossman, who had paused to see if the ball would drop. Wilson Ramos singled to load the bases but Bassitt retired Renato Núñez on a popup then fanned Harold Castro on three pitches.

The game marked the 1,471st for Bob Melvin as manager of the A’s, tying current White Sox skipper Tony La Russa for second most in Oakland history. Connie Mack holds the franchise record with 7,396. “It means I’ve dodged a few bullets along the way and remained in place,” said Melvin, whose 776 wins are 22 fewer than La Russa’s.

Tigers: RHP Spencer Turnbull threw a bullpen at the Tigers'Triple-A facility in Toledo and is scheduled to come off the IL to pitch against Pittsburgh on Wednesday. Turnbull has been on the COVID-19 list since March 29.

Athletics: OF Stephen Piscotty is due to come off the paternity list Monday.

Tigers: Following a day off, RHP Michael Fullmer (1-0. 3.00 ERA) faces the Pittsburgh Pirates on Tuesday to begin a seven-game homestand.

Athletics: Melvin is undecided on his rotation for the series against the Twins after Monday’s game was postponed due to COVID-19 concerns involving some of the Minnesota players. A doubleheader is scheduled for Tuesday pending further testing.