Mark Stone, Max Pacioretty and Nicolas Roy each had a goal and an assist Sunday and the Vegas Golden Knights defeated the Anaheim Ducks 5-2 to move into a tie for first place in the West Division with the Colorado Avalanche. 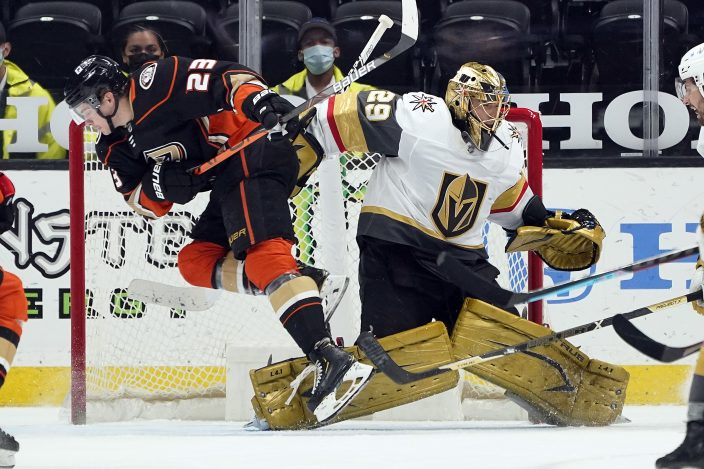 Max Comtois and Danton Heinen scored goals for Anaheim, while Adam Henrique reached 200 assists in his career. John Gibson made 24 saves for the Ducks.

Pacioretty gave the Golden Knights a quick 1-0 lead at 3:25 of the first period when he redirected Alec Martinez’s shot from near the blue line past Gibson. It was Pacioretty’s team-leading 22nd goal, while Stone had a secondary assist, his team-leading 35th. 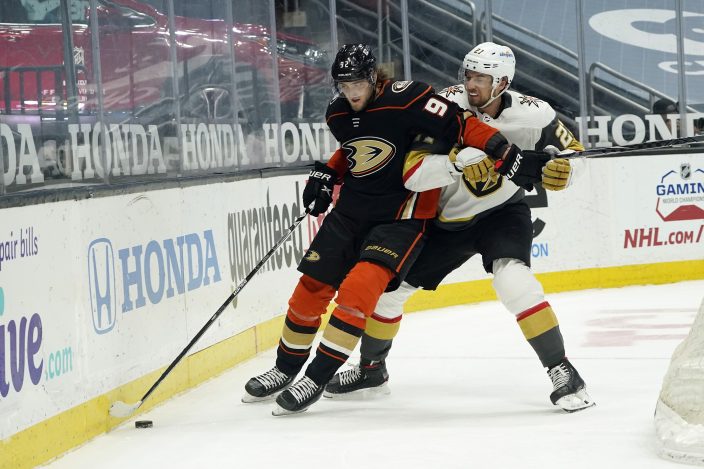 After they were held without a goal in a 4-0 loss to the Golden Knights on Friday, the Ducks finally got on the scoreboard when Comtois scored at 6:23 of the opening period, his team-leading 13th and his third in his past seven games.

Vegas went on top for good when Pietrangelo scored at 14:46 of the first period when he brought the puck in across the blue line and took advantage of a sagging defense when he blasted a shot just inside the left post. It was his fourth of the season.

The Golden Knights made it 3-1 when Roy scored at 2:43 of the second period, his fifth. After Heinen ripped a shot past Fleury from near the right boards to pull Anaheim within a goal, Stone made it a two-score advantage when he delivered his 15th of the season with 1:47 remaining in the second period. 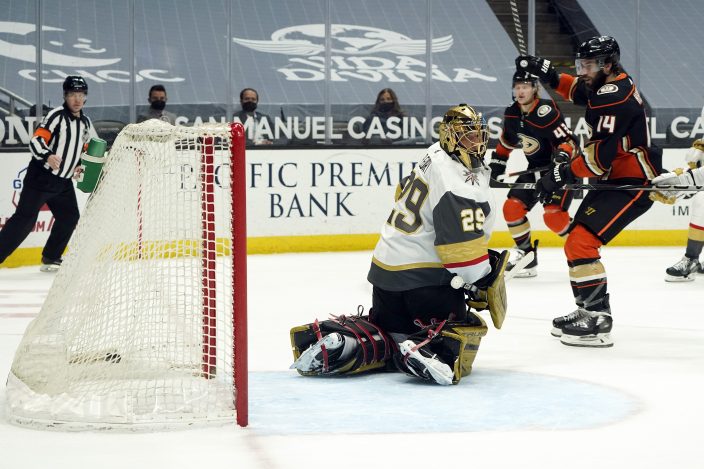 Henrique’s 200th assist came on Heinen’s goal, with 65 of those assists coming in his four seasons with the Ducks.

Tuch scored an empty-net goal for Vegas with 1:27 to play, his 16th. Martinez had a pair of assists for the Golden Knights.

GOLDEN AGAINST THE DUCKS

Sunday’s victory gave Vegas a 6-1-0 record against Anaheim this season, continuing a dominating history. The Golden Knights have won 16 of their 19 games against the Ducks, their most regular-season victories against a single team.

One more game remains in the season series, back at Anaheim on Saturday.

Roy has become more assertive from his center position of late, anchoring the Golden Knights’ fourth line Sunday while scoring in back-to-back games against the Ducks.

Of Roy’s five goals, four have come in his past seven games. It was the first time Roy had scored a goal in back-to-back games in his 76-game career.

Golden Knights: A set of back-to-back games at home against the San Jose Sharks will begin Monday, ahead of a return visit to Anaheim on Saturday.

Ducks: A visit to face the Los Angeles Kings on Tuesday will be the first of five games between the area rivals in a span of 12 days.