France followed Mitch Haniger’s two-run triple with a two-run home run to left field in the decisive four-run fifth inning to give the Mariners the series. Seattle has won four of five and has come from behind in six of 10 victories.

Haniger and France, who bat first and second in the lineup, also had back-to-back RBI doubles in the seventh inning. France has reached base safely in 14 of 16 games. 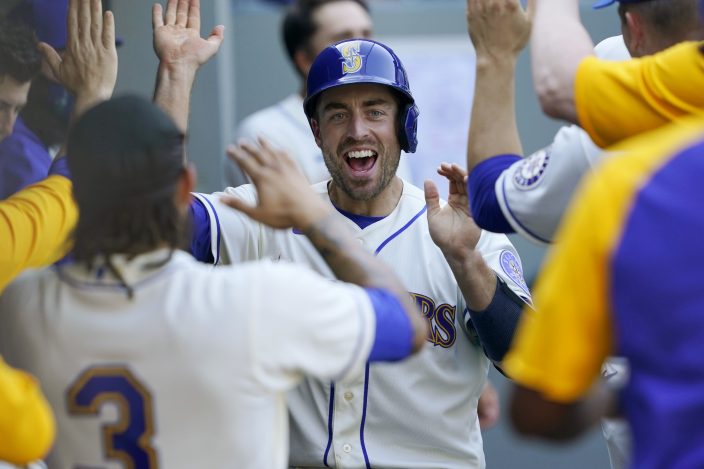 Seattle Mariners' Tom Murphy reacts in the dugout after he scored on an RBI-double hit by Mitch Haniger during the seventh inning of a baseball game against the Houston Astros, Sunday, April 18, 2021, in Seattle. (AP PhotoTed S. Warren)

The loss was Houston’s seventh in its last eight games and comes with five players — including four starters — still on the injured list due to COVID-19 concerns.

Seattle starter Nick Margevicius left in the top of the fifth with an undisclosed injury trailing 2-1 after giving up one hit and one unearned run while striking out three. LJay Newsome (1-0), Casey Sadler, Anthony Misiewicz, Rafael Montero and Drew Steckenrider combined for five innings of hitless relief.

The Mariners bullpen is 6-1 with five saves in the last 11 games, giving up just six earned runs in 35 2/3 innings. 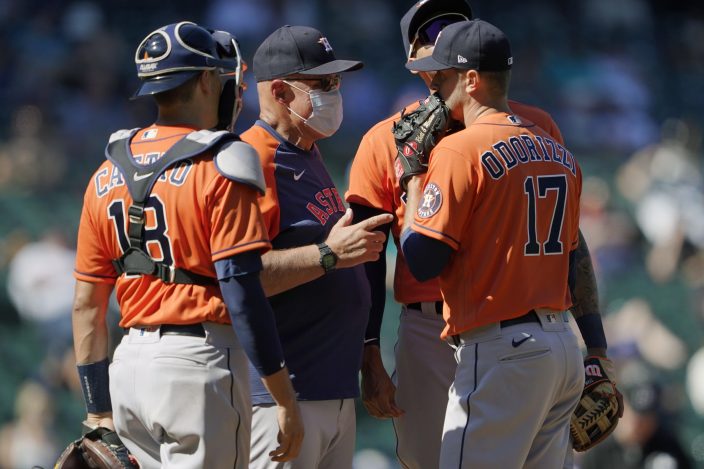 Houston starter Jake Odorizzi (0-2) struck out seven and walked three in 4 1/3 innings. He gave up three hits but was pulled after Haniger’s fifth-inning triple made it 3-2. Aledmys Díaz had Houston’s only hit, an RBI double in the second inning.

Astros: Manager Dusty Baker said 2B Jose Altuve, DH Yordan Alvarez, 3B Alex Bregman, IF Robel Garcia and C Martin Maldonado have been cleared for individual workouts after sitting out since last Wednesday due to COVID-19 safety protocols. “Run, throw, hit, all baseball-related stuff,” Baker said. “It’s a little tough. I mean right now they have to work out individually, and so they’re kind of limited where they can work out and the facilities or whatever, so we’re trying to work through that now.” 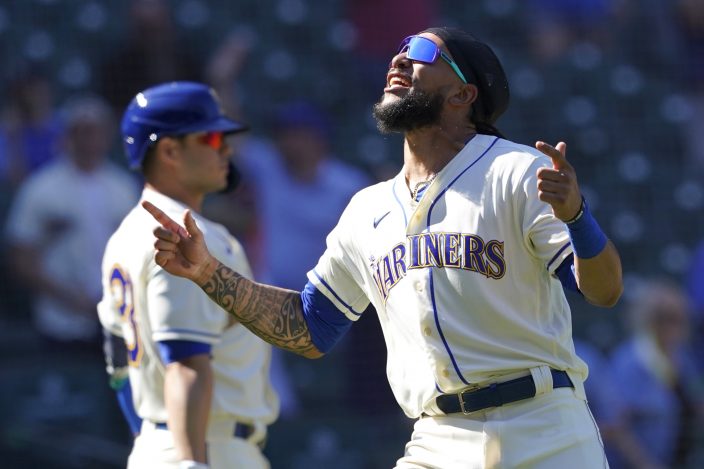 Seattle Mariners' J.P. Crawford reacts after he scored on a two-run triple hit by Mitch Haniger during the fifth inning of a baseball game against the Houston Astros, Sunday, April 18, 2021, in Seattle. (AP PhotoTed S. Warren)

Mariners: Manager Scott Servais said two young prospects struggling with injuries won’t be back soon. LF Jake Fraley (hamstring) has yet to return to baseball activities after going on the 10-day injured list April 7. 2B Shed Long (shin) is playing in minor league spring training games but is not yet fully recovered from a stress fracture in his right shin and surgery to repair the injury. “I think the thing that’s bothered Shed is not so much getting up to running speed, but then slowing down and stopping and big-time change of direction is where he’s felt it,” Servais said.

Astros: Houston is off Monday and Baker said he’s not yet sure whether Lance McCullers Jr. will make his scheduled start Tuesday at Colorado. McCullers had a bad reaction to his vaccine last week and has been having difficulty with his “equilibrium,” Baker said. Baker has two or three options in mind if McCullers can’t go but wouldn’t make them public. 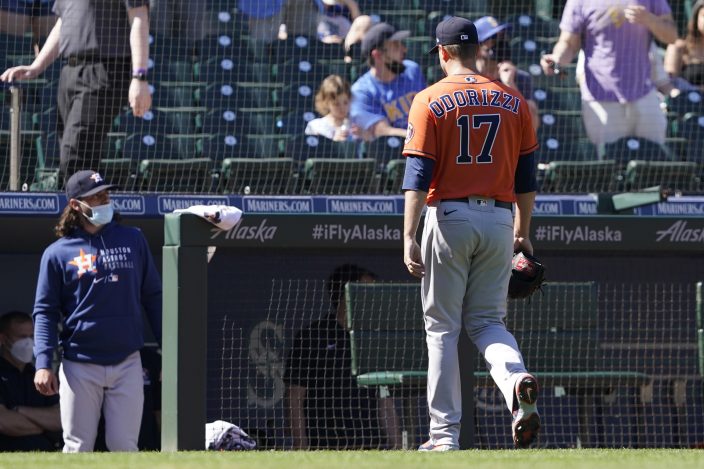 Houston Astros starting pitcher Jake Odorizzi walks to the dugout after being pulled from a game against the Seattle Mariners during the fifth inning of a baseball game, Sunday, April 18, 2021, in Seattle. (AP PhotoTed S. Warren)

Mariners: LHP Justus Sheffield (0-1, 4.91) takes the mound when Seattle hosts the Los Angeles Dodgers on Monday. Sheffield has given up six earned runs and 11 hits in his two starts. 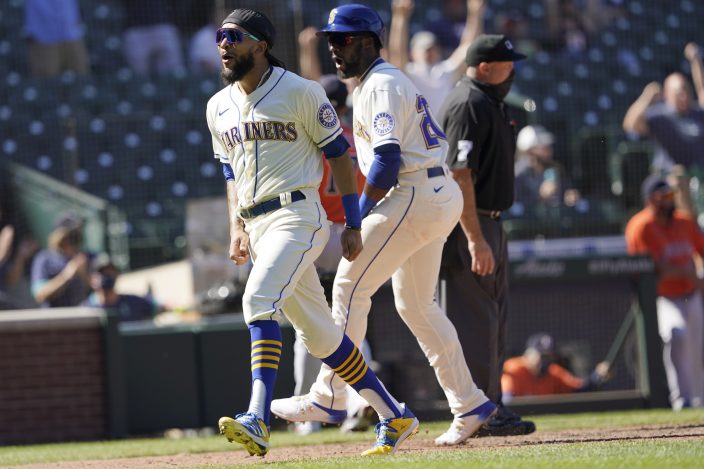 Seattle Mariners' J.P. Crawford, left, and Taylor Trammell react after they scored on a two-run triple hit by Mitch Haniger during the fifth inning of a baseball game against the Houston Astros, Sunday, April 18, 2021, in Seattle. (AP PhotoTed S. Warren)