Freddie Freeman crushed one of Atlanta's four homers in the first inning against Kyle Hendricks, leading the Braves to a potentially costly 13-4 victory over the Chicago Cubs on Sunday night.

But the Braves' offensive performance was overshadowed by the status of Ronald Acuña Jr. after he departed in the fourth due to pain in his lower abdominal muscles. 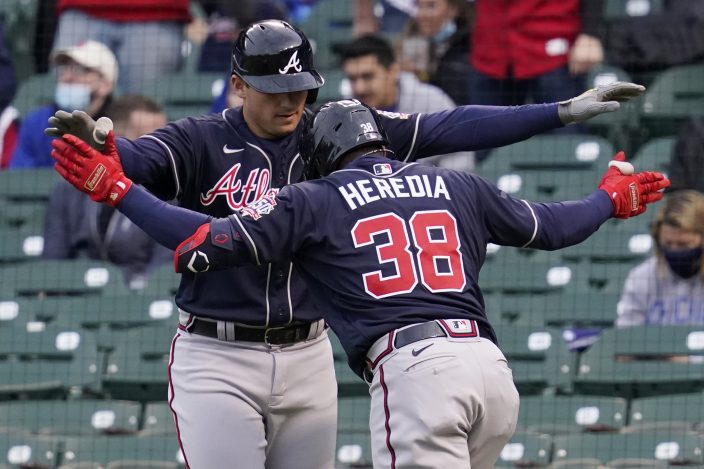 The loss of Acuña for any significant chunk of time would be a tough blow for Atlanta, which has been hit hard by injuries early in the season. The dynamic outfielder began the day with a .433 batting average, seven homers, 16 RBIs and 20 runs scored.

Heredia finished with a career-high six RBIs, and d’Arnaud drove in three runs. Bryse Wilson (1-0) pitched five innings of three-run ball in his first appearance of the season.

Anthony Rizzo hit two solo drives for Chicago, which lost for the sixth time in eight games. It was Rizzo's first multihomer game since Aug. 29 at Cincinnati and No. 19 for his career. 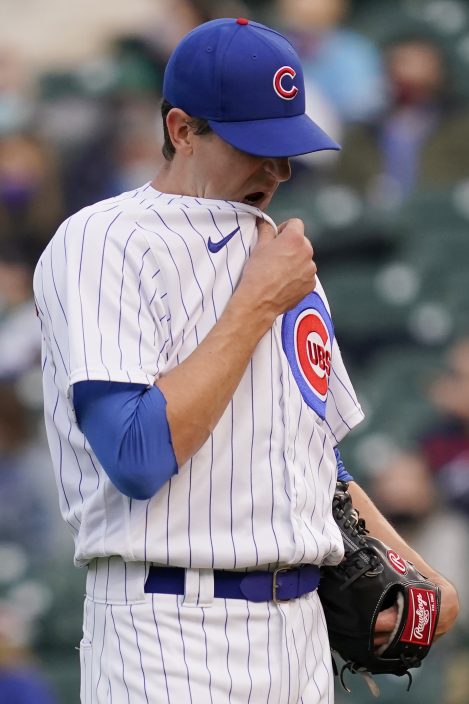 The Cubs bashed six homers during Saturday's 13-4 victory, but it was the Braves showing off their power in the rubber game of the weekend set.

Freeman kicked it off with a one-out solo drive that cleared the bleachers in right for his fifth homer, traveling an estimated 421 feet. D'Arnaud connected for a two-run shot, Adrianza belted a solo homer and Heredia capped Atlanta's six-run first with another two-run drive. 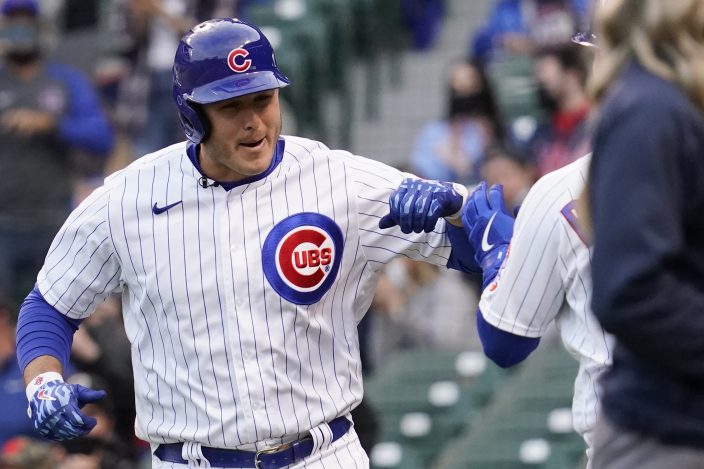 Chicago Cubs' Anthony Rizzo, left, smiles as he celebrates with Joc Pederson after hitting a solo home run during the first inning of a baseball game against the Atlanta Braves in Chicago, Sunday, April 18, 2021. (AP PhotoNam Y. Huh)

Hendricks (0-2) was tagged for seven runs and seven hits in four innings in his first start since April 7. The right-hander was slated to pitch Tuesday at Milwaukee, but he was scratched because of an illness.

NOT BAD AT ALL

Heredia was 0 for 7 in three games this season before busting out against the Cubs. According to STATS, he became the first player to drive in at least six runs in a game from the No. 8 spot in the Braves' lineup since RBIs became an official stat in 1920.

The Cubs said catcher Tony Wolters cleared waivers and was outrighted to the team's alternate site.

Braves: 2B Ozzie Albies was held out for the second straight game. He was hit on the right calf by a pitch in the ninth inning of Friday's 5-2 win in the series opener. The Braves are off Monday, and manager Brian Snitker said he thinks Albies will be ready to play Tuesday night against the New York Yankees. ... Snitker is hoping LHP Max Fried (right hamstring) just misses one start, but he said he “can't say for sure that it won't be longer.” Fried was placed on the 10-day injured list after he got hurt running the bases during Tuesday's 14-8 loss to Miami.

Cubs: Following a day off, RHP Jake Arrieta (2-1, 3.18 ERA) starts Tuesday night in the opener of a three-game series against the New York Mets. RHP Taijuan Walker (0-0, 2.61 ERA) goes for the visiting Mets.