President Joe Biden called Georgia's new voting law an “atrocity.” A leading Black bishop called for a national boycott of companies headquartered in the state. But when Stacey Abrams, the state’s well-known voting rights advocate, is asked about the law that has set much of her party on fire, she is critical but measured.

“These are laws that respond to an increase in voting by people of color,” Abrams told The Associated Press recently. But she discouraged boycotts and reassured Democrats they can still win races under the new rules, even as she hoped they would be struck down in the courts.

The approach demonstrates how Abrams, a former and potentially future candidate for governor, is navigating the politics in the new battleground. Abrams, her allies say, knows statewide Democratic victories — whether Biden’s in November or her own in 2022 — require winning more than just Democrats’ racially diverse and liberal base outraged over GOP's attempts to make it harder for some citizens to vote. Democrats also need moderates voters more reluctant to take sides on the matter. 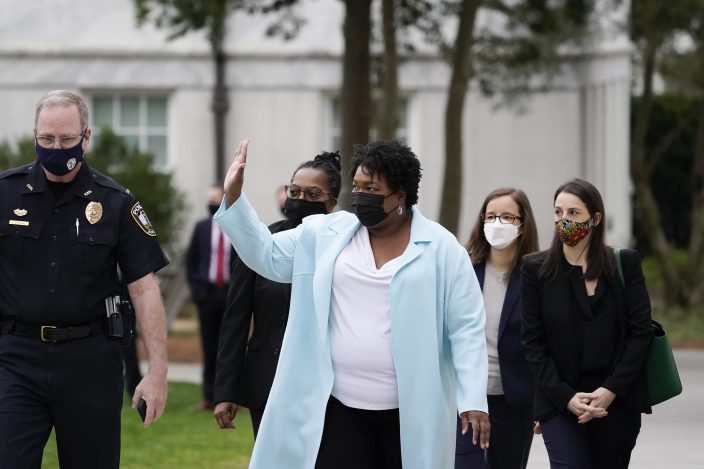 FILE - In this March 19, 2021, file photo Stacey Abrams waves during an event at Emory University in Atlanta. Abrams, Georgia's well-known voting rights advocate, is taking a carefully balanced approach in response to new laws many people have said are an attempt to suppress votes of people of color. When asked about the law changes, she is critical but measured. (AP PhotoAlex Brandon, File)

“Stacey’s been responsible. She’s tried to create a dialogue where we can create change,” said Democrat Steven Henson, a former state legislative leader alongside Abrams.

Certainly, Abrams cannot be described as anything but a staunch opponent of the new law. 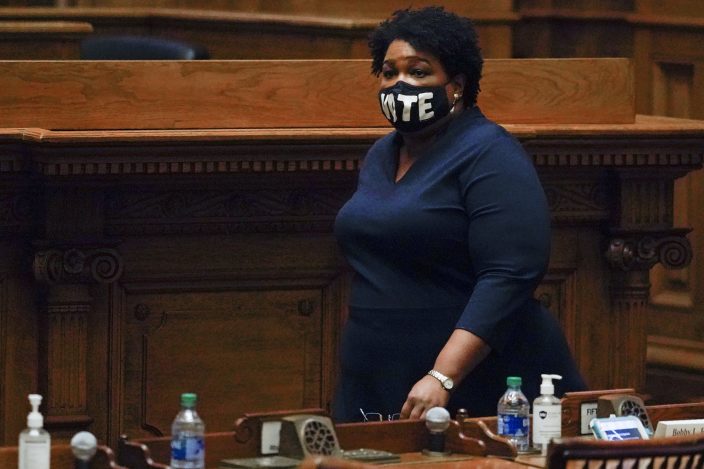 FILE - In this Dec. 14, 2020, file photo Democrat Stacey Abrams, walks on Senate floor before of members of Georgia's Electoral College cast their votes at the state Capitol in Atlanta. Abrams, Georgia's well-known voting rights advocate, is taking a carefully balanced approach in response to new laws many people have said are an attempt to suppress votes of people of color. When asked about the law changes, she is critical but measured. (AP PhotoJohn Bazemore, Pool, File)

“Republicans are gaming the system because they’re afraid of losing an election,” Abrams told the AP.

Yet Abrams has mostly avoided harsh individual criticism of Gov. Brian Kemp, her 2018 Republican rival whom she once dubbed an “architect of voter suppression.” She rarely mentions former President Donald Trump, who falsely blames his defeat on voter fraud. And she’s pointedly not backed business boycotts of her home state or consumer boycotts of the major firms, including Delta Air Lines and the Coca-Cola Co., based there.

“I understand the notion of boycotts as a macro good,” she told the AP, noting her upbringing as a Black woman in the Deep South and her parents’ voter registration work during the Jim Crow era. But Abrams said boycotts ultimately hurt “the victims of these bills.”

Abrams’ position puts her somewhat at odds with fellow activists. “It seems to infer that if we do absolutely nothing and the votes of Black people and people of color are suppressed, that is not a problem,” said Bishop Reginald Jackson of the African Methodist Episcopal Church in Georgia.

But her stance has made it hard for conservatives, including Kemp, to fairly blame Abrams for the the economic fallout from the voting law, mostly notably Major League Baseball's decision to move the 2021 All-Star Game from suburban Atlanta.

Abrams has other incentives to take a softer line with Georgia-based companies. Should she run for governor again and win, she’d occupy an office long friendly with local corporate giants — Delta, Coca-Cola, professional sports franchises and others — now enmeshed in boycott politics.

“Historically, that relationship in Georgia, especially in Atlanta, between the governor, the mayor and those top corporate leaders has been productive,” said Tharon Johnson, a prominent Democrat who served as senior adviser to Biden’s presidential campaign in Georgia.

Abrams drew modest local corporate support in her 2018 race against Kemp. According to the Center for Responsive Politics, a campaign finance watchdog, that included $6,600 from Home Depot’s political action committee. The database listed no contributions from Delta or Coca-Cola.

In that race, Kemp and his GOP allies spent millions tagging Abrams as a “radical” and “too extreme for Georgia." She lost by 55,000 votes out of about 4 million cast. Biden — along with two Democratic Senate candidates — built on her machine to win in the 2020 cycle.

While much could change before a 2022 rematch, it could be Kemp who fights the extremist label next time. While the GOP governor didn't embrace Trump's lies about fraud in the 2020 election, he did back Republican lawmakers' efforts to overhaul Georgia's voting laws in response to Trump's claims.

The Georgia law imposes a new voter identification requirement for mail-in ballots rather than the signature match used in 2020, a change Abrams says is burdensome for older, poorer voters who may not have a state-issued ID or the documentation required to attain one. The law also requires drop-boxes for mail ballots, but limits their number and the times they’re available. It also requires more weekend early voting days, a provision Kemp touts as expanding ballot access.

Biden declared the bill “un-American” and “Jim Crow in the 21st century.” Abrams doesn’t necessarily dispute those characterizations, noting that even the harshest Jim Crow voter suppression laws didn’t explicitly say “Black people can’t vote” but instead put up barriers. Still, she said the latest version, even if burdensome, could end up stoking Democratic turnout because of anger.

When Georgia’s corporate leaders came out in opposition to the law — although they had a hand in writing it — Kemp blamed Abrams and Biden. The companies, he said, were “scared” of Democrats and “caving” to “lies” about the final version.

Abrams, he said, is “raising millions off the fake outrage she has created.”

A recent Associated Press-NORC Center for Public Affairs Research poll found some partisan divisions among voters. About half of Americans support expanding access to early and mail voting, while about 3 in 10 opposed the ideas and the rest had no opinion. Automatic voter registration was the most popular Democratic proposal in the survey, endorsed by 60% of Americans. But an even larger majority — nearly three-quarters of all Americans, including majorities of both parties — expressed support for requiring photo identification.

Georgia voters will have many months to sort out who they believe.

Brian Robinson, once a top aide to former Gov. Nathan Deal, said Trump’s lies about the 2020 election were “the nail in the coffin” for former Sens. David Perdue and Kelly Loeffler, Georgia Republicans who backed Trump and lost their Jan. 5 runoffs, because those lies turned off moderate Georgia voters.

Now, he argued, “they’re being gaslighted by Stacey Abrams.”

Abrams is betting that Robinson underestimates the number of voters like Chris Srock of Marietta, north of Atlanta. At a park with his wife and daughters recently, Srock described himself as “something in-between” a Democrat and Republican.

Srock isn't blaming the voting-law fallout on Abrams. After all, he noted, Republicans enacted it.