China's women's football team has booked its spot at the Tokyo 2020 Olympics after drawing 2-2 with South Korea after extra time in the second leg of Asian Qualification playoffs here on Tuesday.

Chinese star player Wang Shuang contributed one goal and one assist as the Steel Roses came from 2-0 behind to beat South Korea 4-3 on aggregate in the Olympic Qualification playoffs. 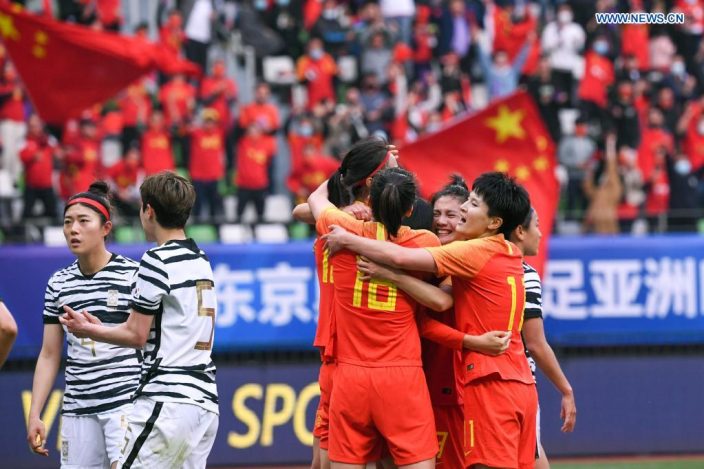 "The match was even harder than I expected. I would like to thank all my players for not giving up when we were 0-2 behind. As long as they can carry on the spirit, I believe that our team will become better and better," Chinese head coach Jia said at the post-match press conference.

Going into the match 2-1 down from the first leg, the South Koreans executed a high press from the front and took the reins in the first half. They broke the deadlock in the 30th minute when Kang Chae-rim scored after a precise cross from Cho So-hyun.

In the last minute of the first half, Chinese goalkeeper Peng Shimeng saved a close-range header from a corner, but couldn't keep the ball out of the net from a rebound shot. The goal was initially credited to South Korean forward Choe Yu-ri, but the Asian Football Confederation (AFC) later ruled it as Chinese defender Li Mengwen's own goal.

Coach Jia changed his tactics in the second half as Yang Man came off the bench and became the turning point of the match. The 1.86-meter center forward controlled the majority of long balls and headed home a free kick from Wang in the 68th minute.

"The only thing we could do then was to fight bravely. I made some changes at the half break. My players were united and executed the plan well," Jia noted. "My players were under great pressure, I am very proud of what they did on the pitch -- held up to the last minute of the two-hour-long match."

In the 103rd minute, Wang fired a long-distance left-footed shot into the bottom right corner, gifting China a lead on aggregate, which denied South Korean's dream to qualify for the Olympics for the first time.

South Korean head coach Colin Bell spoke highly of Wang's performance, saying that his team couldn't afford to let such a "world-class player" take over the match. "If we are gifting that kind of player that opportunity, she's not going to say no. That's very, very disappointing and bitter for us after performing so well for 120 minutes."

Despite the disappointing result, Bell was pleased with the progress his players made during the process. "I think we saw glimpses of that this evening. I am very positive about the future, if we can continue and work the way we've been working," he said.