GEORGE FLOYD-OFFICER TRIAL — Attorneys in the trial of a former Minneapolis police officer charged with killing George Floyd are set to make their closing arguments, each side seeking to distill three weeks of testimony to persuade jurors to deliver their view of the right verdict. By Amy Forliti and Tammy Webber. SENT: 820 words, photos. With GEORGE FLOYD-OFFICER TRIAL-TIMELINE. VIRUS-OUTBREAK — Half of all adults in the U.S. have received at least one COVID-19 shot, the government announced, marking another milestone in the nation’s largest-ever vaccination campaign but leaving more work to do to convince skeptical Americans to roll up their sleeves. Almost 130 million people 18 or older have received at least one dose of a vaccine, or 50.4% of the total adult population, the Centers for Disease Control and Prevention reported. By Hope Yen and Jonathan Mattise. SENT: 920 words, photos, video. With VIRUS OUTBREAK-THE LATEST.

VIRUS-OUTBREAK-FRANCE — A renewed crush of COVID-19 cases is again forcing intensive care units across France to grapple with the macabre mathematics of how to make space for thousands of critically ill patients. Having learned from the bitter experience of the early months of the pandemic, French hospitals now fight relentlessly to keep patients awake and off mechanical ventilators, if possible. Instead, ICU teams are using persuasion to convince patients to stick as long as possible with less-invasive breathing masks and nose tubes. By John Leicester. SENT: 900 words, photos.

BIDEN-CLIMATE — When President Joe Biden convenes a virtual climate summit on Thursday, he faces a vexing task: how to put forward a nonbinding but symbolic goal to reduce greenhouse gas emissions that will have a tangible impact not only on climate change efforts in the U.S. but throughout the world. By Matthew Daly. SENT: 1,100 words, photos. 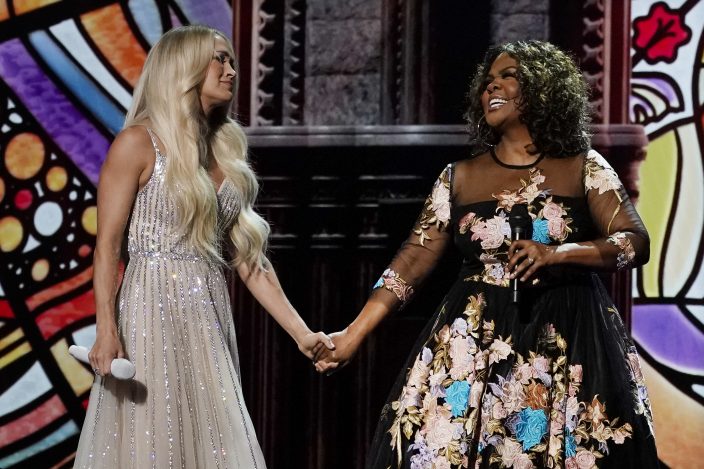 Carrie Underwood, left, and CeCe Winans perform at the 56th annual Academy of Country Music Awards on Saturday, April 17, 2021, at the Grand Ole Opry in Nashville, Tenn. The awards show airs on April 18 with both live and prerecorded segments. (AP PhotoMark Humphrey)

AUSTIN-FATAL SHOOTING — A manhunt is underway for a former sheriff’s deputy wanted in the fatal shooting of three people in Austin, Texas, as an official said it wasn’t known if the suspect was still in the city. By Jim Vertuno. SENT: 580 words, photos, video.

VOTING BILLS-ABRAMS — Stacey Abrams, Georgia’s well-known voting rights advocate, is critical but measured when she is asked about the new voting law that has set much of her party on fire. The approach demonstrates how the former and potentially future candidate for governor is navigating the politics in the new battleground. By Bill Barrow. SENT: 1,150 words, photos. 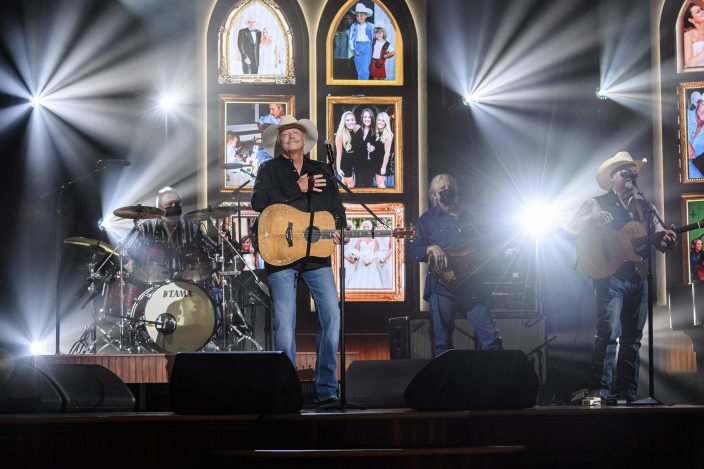 Alan Jackson performs at the 56th annual Academy of Country Music Awards on Thursday, April 15, 2021 at the Ryman Auditorium in Nashville, Tenn. The awards show airs on April 18 with both live and prerecorded segments. (Photo by Amy HarrisInvisionAP) Maren Morris, left, and Ryan Hurd perform at the 56th annual Academy of Country Music Awards on Friday April 16, 2021 at the Ryman Auditorium in Nashville, Tenn. The awards show airs on April 18 with both live and prerecorded segments. (Photo by Amy HarrisInvisionAP)

TESLA-CRASH — Authorities say no one was driving Tesla before deadly crash. SENT: 320 words. 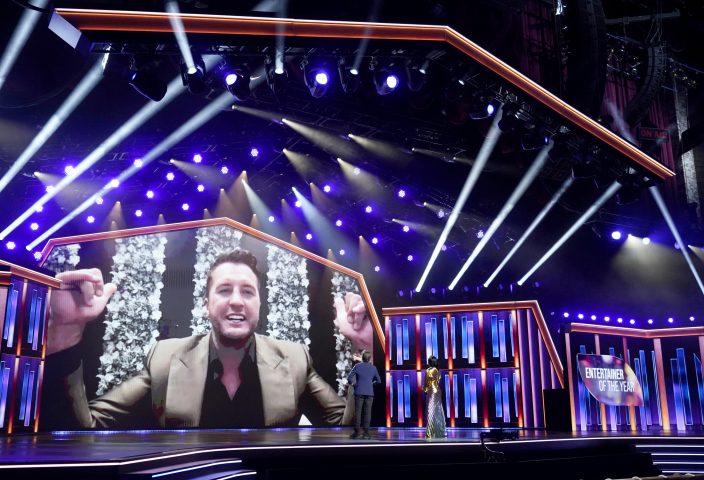 Luke Bryan appears on screen accepting the award for entertainer of the year at the 56th annual Academy of Country Music Awards on Sunday, April 18, 2021, at the Grand Ole Opry in Nashville, Tenn. Looking on from left are hosts Mickey Guyton and Keith Urban. (AP PhotoMark Humphrey)

VIRUS-OUTBREAK-ALASKA-NATIVE-VILLAGES Alaska’s highest COVID-19 vaccination rates have been in some of its remotest, hardest-to-access communities. SENT: 1,060 words, photos.

INDIA-ELECTRIC-VEHICLES — India has ambitions to expand use of electric vehicles to wean itself from polluting fossil fuels, but EVs are still a rarity on its congested highways. SENT: 1,020 words, photos.

GERMANY-ELECTION Germany’s environmentalist Greens were set to announce who will make the party’s first run for the chancellery in September’s national election, while a power struggle in Chancellor Angela Merkel’s center-right bloc entered its second week. SENT: 650 words, photo.

FINANCIAL-MARKETS — Asian shares were mixed amid cautious optimism about a global rebound from the coronavirus pandemic. By Yuri Kageyama. SENT: 1,020 words, photos.

MUSIC-ACM-AWARDS — Though female country stars didn’t compete for the night’s top prize – Luke Bryan was named entertainer of the year – they owned the ACM Awards. By Mesfin Fekadu. SENT: 830 words, photos. With MUSIC-ACM-AWARDS-LIST.

HARLEM SKATING CELEBRATION — Figure Skating in Harlem has returned after a hiatus due to the COVID-19 pandemic. By Sports Writer Barry Wilner. SENT: 750 words, photos.

Hit by a ransomware attack? Your payment may be deducti ...