Tom Brady expects to be ready for June minicamp with the Tampa Bay Buccaneers as he recovers from offseason knee surgery.

Speaking at a fundraising gala for Bucs coach Bruce Arians' foundation, Brady joked he didn't know “if I can go this week,” then added he is aiming to be back on the field relatively soon for the Super Bowl champions.

“I feel pretty good and I push myself pretty hard,” he said. “... we we will see how things play out. It is a long time between now and the beginning of the season. Just be smart about all these different things we have to do and fulfill. We all take a lot of pride in being ready to go and I am sure we will be.” 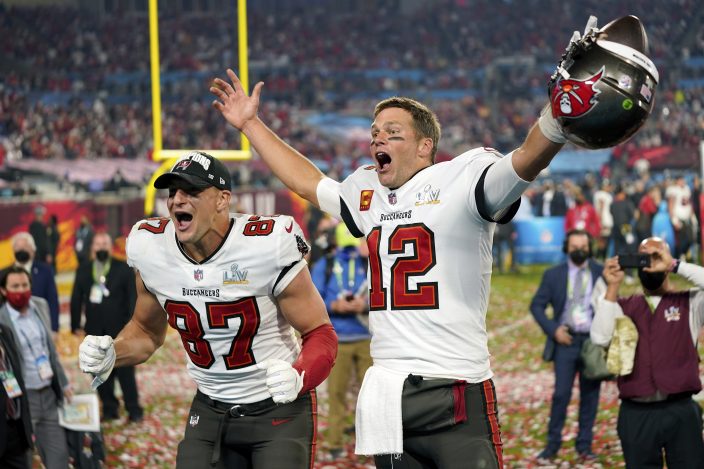 FILE - In this Sunday, Feb. 7, 2021 file photo, Tampa Bay Buccaneers tight end Rob Gronkowski (87), left, and Tampa Bay Buccaneers quarterback Tom Brady (12) celebrate together after the NFL Super Bowl 55 football game against the Kansas City Chiefs in Tampa, Fla. NFL Films has been chronicling Tom Brady’s career since he entered the league in 2000, but there are still times when there are still new things to reveal. That is the case with this year’s Super Bowl film, chronicling Brady’s seventh championship and his first with the Tampa Buccaneers. (AP PhotoSteve Luciano, File)

“It’s good, it’s good. It’s good progress,” Brady said. “It’s rehab. None of that is fun, but looking forward to getting back to real training and stuff, which is hopefully here pretty soon.

"I’m cool with it. It’s just part of what you deal with. Things come up. You deal with them the best way you can, with the best opportunity to improve. I’m definitely feeling a lot better than I did six or seven weeks ago.”

Bucs players, along with those from half of the league's teams, have said they will not attend voluntary offseason workouts, which could begin Monday. Minicamps are mandatory for players who are fit to participate.