Trey Smith has no problem explaining his situation, no matter how many times he has to detail his history of blood clots.

The Tennessee guard wants to make sure no NFL coach or general manager has any unanswered questions about his availability to play before the upcoming draft.

“I'll explain it a million times if I have to,” Smith said. “Because it’s just something unique. It’s something that’s different. At the end of the day, I want to play football at a high level. I want to go to the NFL, so I have no issue whatsoever helping people understand what I went through and making them comfortable with it as well.” 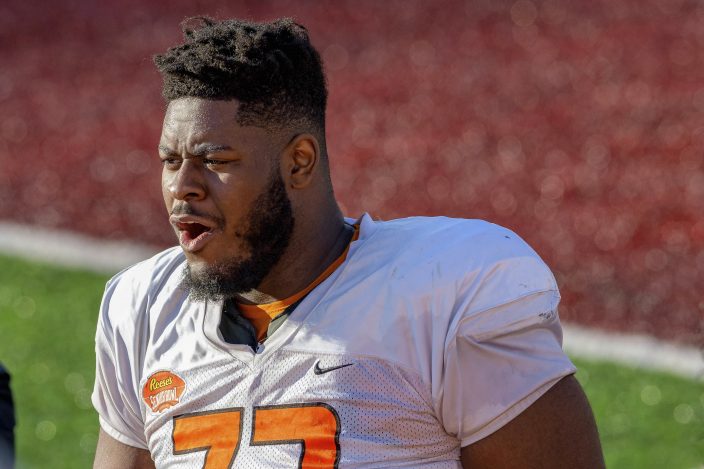 FILE - American Team offensive lineman Trey Smith of Tennessee (73) watches during the American Team practice for the NCAA Senior Bowl college football game in Mobile, Ala., in this Thursday, Jan. 28, 2021, file photo. Tennessee guard Trey Smith says he has no problem explaining his situation, even a million times if he must. He played college football while dealing with a condition that can cause blood clots, and Smith says it’s unique. But he wants to play in the NFL, so he has no problem detailing the plan his doctors and specialists put together allowing him to do just that. (AP PhotoMatthew Hinton, File)

The 6-foot-5, 321-pound Smith played 42 games at Tennessee even while dealing with his condition.

Blood clots in his lungs kept him out of spring practice in 2018, but blood thinners allowed him to eventually return. He missed the final five games that season when doctors worried Smith had a recurrence of blood clots before extended testing made them confident that hadn’t happened.

Doctors and specialists put together a plan and medications that allowed him to start 12 of 13 games in 2019 at left guard, and he earned first-time All-Southeastern Conference honors.

Smith was confident enough in the plan that he played in each of the Vols' 10 games during the 2020 season instead of opting out during the pandemic. He also was All-SEC for a second straight season.

That's why Smith has no concerns about being able to play in the NFL. He says teams that do their research will understand, especially if they talk to the doctors and specialists Smith went across the country to see.

“They’ll sort of see the plan we have set and (have) a lot more confidence in it as well,” Smith said. “I know that’s something we haven’t been completely open about in the past due to my own privacy. But at the end of the day, it’s a plan that will not only sustain itself in the NFL, but have a lot of success as well.”

NFL scouts and coaches got a closer look at Smith both at the Senior Bowl in January and at Tennessee's pro day in March. Before the Senior Bowl, Smith got some feedback from former Tennessee offensive lineman Ramon Foster, who played 11 seasons at guard with the Pittsburgh Steelers.

“So just being able to be in communication with him, and just get knowledge and information from a veteran that played in the NFL that long, I mean, I want to soak it up like a sponge, man,” Smith said.

Teams have talked with Smith about playing both tackle and guard and whether he prefers the left or right side. At Tennessee's pro day, he ran a 5.1-second 40-yard dash, had a 31-inch vertical leap and did the three-cone drill in a time of 7.43 seconds to show off his athleticism.

Smith also bench-pressed 225 pounds 32 times, raising more than $4,100 for Uplifting Athletes to help people dealing with rare diseases. He wound up doing two more reps than he hoped for, inspired by people he trained with.

“For them, it means the world,” Smith said. “But for us as athletes, with the platform we have, I think it’s something we should do.”

That's nothing new for Smith, who won the Torchbearer award for serving Tennessee with overall excellence. Smith also joined some fellow athletes in leading an anti-racism march on campus last August.

Still, the first and biggest question about Smith is his health.

“Hopefully it will be a way to pioneer ground for people with my issues, that have blood-clotting issues and things of that nature,” Smith said. “Then you look at people like David Andrews, Russell Okung, they’ve been playing and they had very similar issues that I’ve had. We’re talking about very high-level offensive linemen.”

And Smith wants to be the next.