Joey Gallo is getting on base a lot for the Texas Rangers without going out of the park.

That is quite a shift for the 6-foot-5 slugger who homered in the only pitch he's faced in an MLB All-Star Game and got to 100 career homers quicker than any player in American League history, at a time when he had only 93 singles.

Gallo reached base in each of his first 15 games this season, his only homer being an impressive 450-foot drive to center in the opening series at Kansas City. His other 10 hits were all singles and he had an MLB-high 15 walks. He got on three other times when hit by a pitch and was the only Texas base runner in the game where Joe Musgrove plunked him while throwing the first no-hitter in San Diego Padres history. 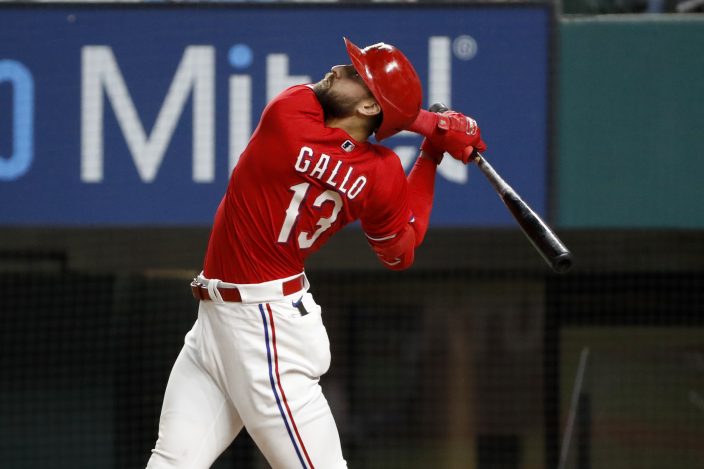 “When I was younger, I thought it was really cool to hit 40 home runs. And then I remember everyone’s just kind of like bashing me, saying I’m the worst 40 home run hitter,” said Gallo, 27. “And I was like, all right, I guess it’s not that cool to hit 40 home runs. It’s something that I don’t really focus on anymore. But I think it’s cool that I’m kind of doing the complete opposite of what I’m known for.”

His .453 on-base percentage this season was seventh in the majors going into Monday night's game at the Los Angeles Angels, even while hitting .239 (103rd out of 178 qualified batters) with a .304 slugging percentage (143rd). 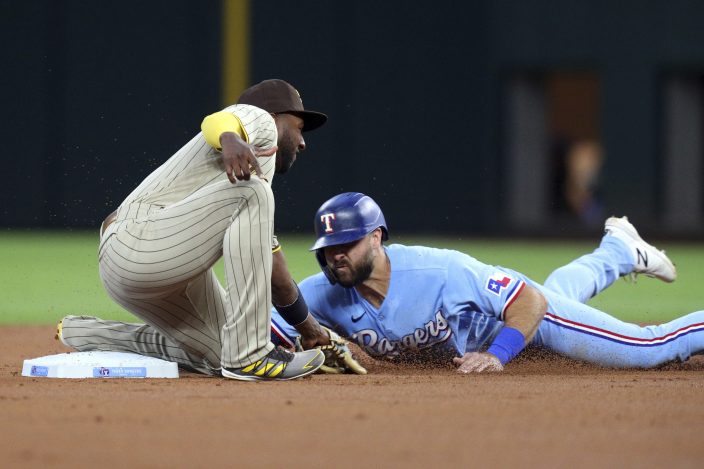 The last Rangers player with a longer on-base streak to start a season was Ian Kinsler at 25 games in 2008. Going into Monday, the only longer active on-base streaks were by San Diego’s Manny Machado and Toronto’s Vladimir Guerrero Jr., both at 16 after extending theirs Sunday, when Gallo had his first day off this season.

"If he’s still able to get on base at almost a 50% clip, that speaks volumes of what this guy is as a hitter right now,” Rangers manager Chris Woodward said. “He’s not even hitting homers and they’re still walking him.”

Opposing teams also employ drastic defensive shifts against the left-handed slugger, who has gotten used to “people running around crazy” when he's at the plate. Tampa Bay used an alignment with five defenders in the outfield, and Gallo beat that with a bloop single up the middle.

“You kind of have to come up with a counter approach for it. I wasn’t going to be able to hit a double or a ball in the gap,” he said. “So I had to hit the ball on the ground. I had to hit bloopers, I had to work the count and try to walk, or hit it over the fence. ... It was either kind of a singles, a walk or a home run approach.”

Woodward knows Gallo will eventually have to hit more homers, and the manager has full faith “he will because he has a ton of power." Gallo homered in five of his first 14 at-bats this spring.

But Woodward doesn't want Gallo stressing out about trying to go deep to the point that he starts pulling off pitches or chasing them.

“Which is going to lead to less on base at the end, and maybe hit a few more homers. But saying that, like, that’s not going to help us,” Woodward said. “When Joey gets hot, they tend to come in bunches. Obviously, he hits the ball in the air, and off his barrel it doesn’t usually come back. So right now he's staying patient."

During the pandemic-altered season last year, Gallo's .181 batting average was the second-lowest among 142 qualifiers last year. The right fielder hit 10 homers in 57 games and won a Gold Glove for the first time.

“I know I'm more than a home run hitter,” he said. “I can hit singles, I can get on base. I can still do other things on the field besides hit home runs and still help the team win. At the end of the day, that’s really what matters.”