The New York Yankees' players and staff are restless. So are fans.

A 5-10 start, the franchise's worst in 24 years, has shaken a team that expects to contend for a World Series title.

“Right now we would be a team that an opponent would want to play because obviously we’re not firing on all cylinders,” general manager Brian Cashman said Monday. “So if you have a chance to catch us right now, you’re catching us at the right time, through obviously yesterday’s games, and we look forward to that changing.” 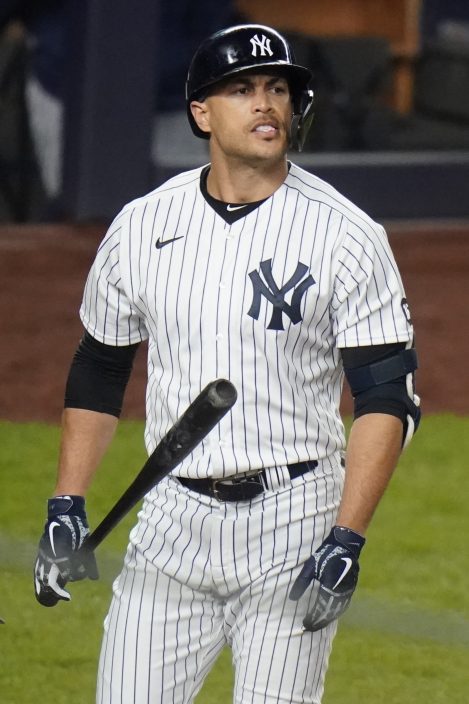 New York Yankees' Giancarlo Stanton reacts after striking out during the fourth inning of the team's baseball game against the Tampa Bay Rays on Friday, April 16, 2021, in New York. (AP PhotoFrank Franklin II)

Batting, pitching and fielding have faltered.

New York’s .210 batting average is next-to-last in the American League, and a team with a dearth of left-handed hitters is batting just .202 against right-handed pitchers. The Yankees’ 55 runs entering Monday tied Detroit for the AL low. 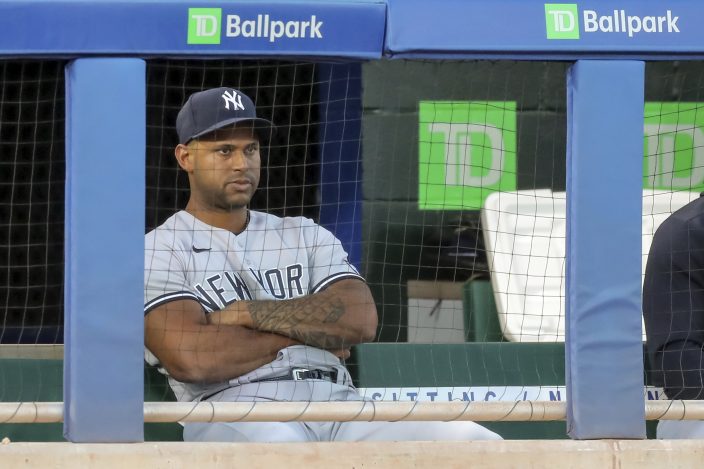 New York Yankees' Aaron Hicks watches the second inning of a baseball game against the Toronto Blue Jays, Monday, April 12, 2021, in Dunedin, Fla. Hicks asked to be removed from the lineup in response to a police shooting in Minneapolis. (AP PhotoMike Carlson)

Only the bullpen, which has a 2.43 ERA that is third best in the major leagues, has performed to expectations.

“There’s a lot of tossing and turning going on,” Cashman said, “but we’re going to do everything in our power to avoid that finger pointing or having those frustrations boil over into something negative and make sure that we just rally the troops around each other and try to be there in a strong, supportive way, because right now we earned any negative criticism.”

Cashman accepts the carping — but said it was unacceptable and illegal for fans to throw balls on the field during Friday’s 8-2 loss to Tampa Bay, which caused the game to be stopped for 2 minutes, 15 seconds.

New York has lost five consecutive games going into Tuesday’s interleague series opener against Atlanta. A loss would drop the Yankees to 5-11 for the first time since 1972.

Cashman thought back to other slow starts. In 1997, the Yankees lost 10 of their first 15 games and finished 96-66 and earned a wild-card berth.

“I don’t remember any of those because ultimately we got back on track,” he said. “We got through it. We found a way to be ourselves and be what we’re capable of.”

Jay Bruce, who announced his retirement Sunday, spoke to the team before his final game and reminded them “about the game’s ups and downs and trying to stay consistent and staying together while you’re going through the tough times,” according to Cashman.

First baseman Luke Voit is expected back in May following knee surgery. Bruce, his replacement, retired Sunday after hitting .118. DJ LeMahieu has moved to first, with Rougned Odor (.125) filling in at second.

Looking ahead, left-handed reliever Zack Britton is expected back in June after elbow surgery and Luis Severino in the summer following Tommy John surgery.

“I’m very proud of the fact that we’ve had a lot of storms hit along the way and change doesn’t happen without a great deal of thought and effort and reason behind it,” Cashman said. “We’re not reactive. And so I don’t see us reacting to how to shake the roster up too quickly. And I don’t see us reacting to not believing in the staff that we have and in the players we have, either.

"And that’s the message for our players: Hey, man, we do believe in you. We know what you’re capable of. This is a bad stretch. We’re going to get through this together. This isn’t us versus them. This is collectively all of us wearing this, including myself, and we’re going to have to find a way to get to it sooner than later so we can avoid having to feel the way we are right now and having our fans feel the way they are right now.”

A shooting at an upscale South Flo ...