With groups of players from 20 NFL teams saying they will skip in-person attendance, voluntary offseason programs began Monday across the league.

Through the NFL Players Association, players from the Super Bowl champion Buccaneers, 49ers, Rams, Seahawks, Dolphins, Jets, Patriots, Chargers, Raiders, Broncos, Falcons, Saints, Steelers, Browns, Ravens, Giants, Eagles, Vikings, Bears and Lions posted statements that they would not be on hand at team facilities for voluntary work. Those statements did not cover every player from those clubs.

On Monday, for example, some players reported to the Cowboys, Patriots, Raiders and Panthers facilities. 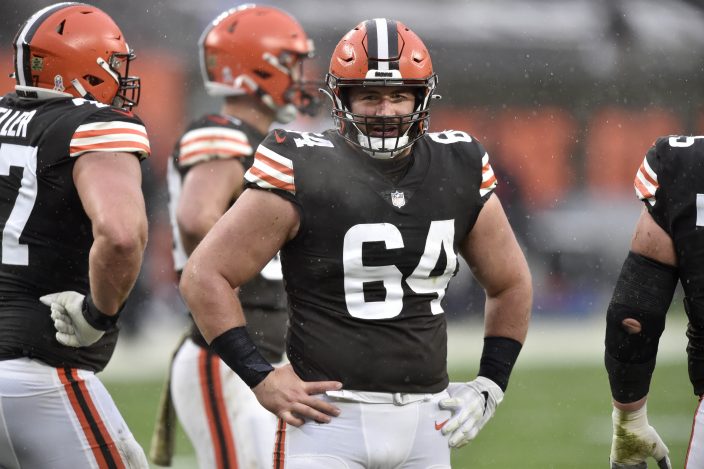 FILE - In this Sunday, Nov. 22, 2020 file photo, Cleveland Browns center JC Tretter stands on the field during an NFL football game against the Philadelphia Eagles in Cleveland. NFL players were locked out of team headquarters last offseason because of the coronavirus pandemic. This year, their union wants them to boycott any in-person OTAs. Last year, teams were forced to do everything online until training camps opened in August, and NFL Players Association president J.C. Tretter has been advocating for a repeat of last year's offseason, arguing that the adjustments caused by the coronavirus showed the arduous offseason programs were unnecessary.(AP PhotoDavid Richard, File)

“We’d like to hope that we create a great environment for them,” said Cowboys executive vice president of personnel Stephen Jones. "But at the end of the day, this is not a mandatory time of the year for our players. And historically, it’s never been mandatory and historically, though, we still have a large number of players who chose to work out here.

“We have a lot of guys down here, looks like to me. I’m overlooking the field and a lot of guys are out here working out. Just want to provide them a great opportunity here to get better. Every player, every team’s different.

"It’s interesting because we all know OTAs are voluntary. That’s strictly up to the players. They certainly have the right to make those decisions. I’m sure our players have talked at length about it.”

Meanwhile, the league and players' union continue talks about adjustments to the offseason.

Last week, the NFL sent a memo to all 32 teams saying the first four weeks of the voluntary program will be virtual. The plan is to then transition to in-person work at team facilities — something Browns center JC Tretter, the union president, has said is unnecessary.

Last year, the offseason programs were all done virtually and training camp was pushed back because of the COVID-19 pandemic. This year, organized team activities can begin May 24 for 10 sessions, and minicamps, which are mandatory, can be held until June 18.

Whether players show for any of those workouts is uncertain. Tretter, who spoke with Browns management about the players' viewpoint, has been adamant that the 2020 approach should be continued.

“The good news for our sport is that while the NFL season looked and felt noticeably different from previous years,” he wrote last month on the NFLPA website, “we learned that the game of football did not suffer at the expense of protecting its players more than ever before.

"Our process is to follow the science on what is safest for our guys, and many of the changes this past year — like no in-person offseason workouts/practices, the extended acclimation period before training camp and no preseason games — gave us a year of data that demonstrates maintaining some of these changes long term is in the best interest of the game.”

“It’s where players improve," Brandt said Monday during a SiriusXM conference call. "And you know, we had a bunch of players on our team that were changing positions; Pat Donovan is an example. Four-time Pro Bowler, small school (Fort Valley State). Herbert Scott, small school (Virginia Union). And I think if it weren’t for the offseason program, I don’t think they would have achieved the stardom that they did and helping win football games like they did if it wasn’t for that tuneup.

“But I think that the new president of the players association, Tretter, with his Cornell background, I think he’s a thinker, and he’s always thinking of ways to make it easier for the players yet not hurt their overall performance.”