The plan for a Super League is shaping up as perhaps the most polarizing idea in European soccer in more than a generation.

The project announced early Monday by 12 breakaway clubs would make winners and losers worldwide if it overcomes widespread resistance and kicks off as soon as August.

Here's a look at some of the things at stake: 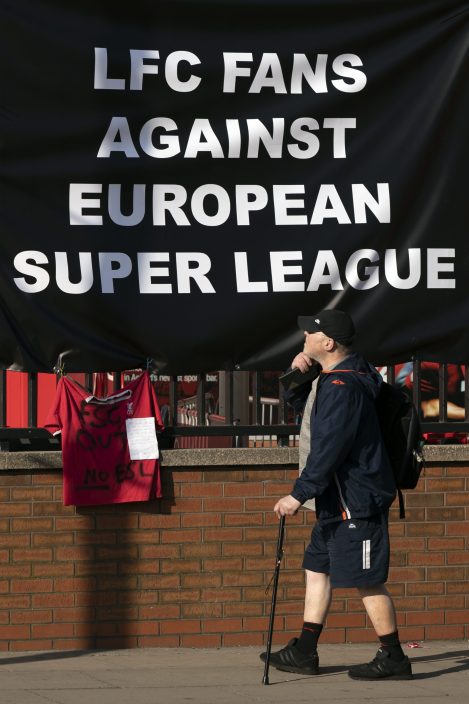 A member of the public passes a banner outside Liverpool's Anfield Stadium protesting the formation of the European Super League, Liverpool, England, Monday, April 19, 2021. Players at the 12 clubs setting up their own Super League could be banned from this year's European Championship and next year's World Cup, UEFA President Aleksander Ceferin said Monday.

WHO BENEFITS FROM A SUPER LEAGUE?

Most owners are already billionaires — investors and hedge funds from the United States, an oligarch from Russia, construction and retail magnates from Spain and China, royalty from Abu Dhabi, a tax-exiled currency trader from England.

The 12 rebel clubs already have the highest revenues in world soccer, earning hundreds of millions of dollars from playing in domestic leagues and selling sponsorships globally.

Most top up income with around 100 million euros ($120 million) each season from UEFA in Champions League prize money.

The founding clubs aim to at least triple their Champions League income from the Super League without the risk of failing to qualify. The new competition underwritten by financiers at JP Morgan should offset the risk of losing domestic income.

Even before the coronavirus pandemic hit soccer revenues, some elite clubs ran up debts of hundreds of millions. Risk is not good for their current operations.

The owners' status could also soar. Instead of having a seat at UEFA’s decision-making tables, they will run their own show with equal shares in a new Super League Company.

TOP PLAYER SALARIES: More club income should mean salary raises for players — and a cut for their agents, inevitably.

The Super League shapes to create a two-tier salary structure in European soccer separating the clubs in and those left behind.

The trend was accelerated by megadeals such as those that brought Neymar and Kylian Mbappe to Paris Saint-Germain in 2017. These deals helped create a market for wages and transfers only a few clubs can trade in.

When a few clubs collect the best players, it is even harder for other teams to close the gap on and off the field.

FANS OUTSIDE EUROPE: Research by the rebel clubs shows there are potentially hundreds of millions of new followers are in Asia and North America. Many follow more than one high-profile team, want to see them play each other more often, and maybe identify as supporters of individual star players instead of a club.

This is heresy to home-based fans who typically support their local team they grew up going to watch with family and friends. The Super League project is smitten with attracting fans - and their money - further afield.

It could interest Big Tech firms with ideas about how to distribute content — and not just live games in full — to new fans with different viewing habits.

Super League clubs will have ideas about packaging and monetizing digital content they would now have more control over.

WHO LOSES FROM A SUPER LEAGUE?

UEFA: The Champions League organizer would lose status and most of the clubs with the widest worldwide appeal to fans, broadcasters and sponsors.

The European soccer body already sold most of around $14 billion in expected commercial revenue for the next three years of its club competitions through 2024. That was on the promise of the best clubs and players taking part.

Playing hardball with the 12 clubs, as UEFA President Aleksander Ceferin did Monday, also opens the door to unpredictable legal battles. It could start with weighing whether to kick out five Super League clubs from the Champions League and Europa League semifinals that open next week.

OTHER LEAGUES, TEAMS AND PLAYERS: The Super League damages ambitions on the field and financial prospects off it for thousands of players, hundreds of clubs and dozens of leagues across Europe.

Domestic games risk losing attention and appeal if the Super League cuts itself off — or is cut off by UEFA and other soccer bodies — from the game's pyramid structure. Even if the Super League teams stay in domestic competitions, they would likely field weaker lineups.

Players could could lose the chance to test themselves and improve against the best opponents.

FANS IN EUROPE: They are known to the rebel 12 as “legacy fans,” who they seem to be taking for granted. These are home-based fans who typically care for tradition and resist change.

Some would lose domestic rivalries. All would face more expensive away trips involving a flight and hotel instead of by road or rail.

The backlash since Sunday against the Super League from fans, former players and, in Britain, by Prince William and Prime Minister Boris Johnson suggests the clubs also have a big part of their reputations to lose.

CHAMPIONS LEAGUE BROADCASTERS: Dozens of channels have bought and planned for three seasons of the highest quality club competition in world soccer.

UEFA said Monday it will keep going ahead with the Champions League “with our without” the 12. That would be leave broadcasters paying a top-tier price for games lacking the best players subscribers and advertisers prefer to see.