The D.C. medical examiner's office ruled Monday that Capitol Police Officer Brian Sicknick, who was injured during the Jan. 6 insurrection, suffered a stroke and died from natural causes.

Sicknick was among five people who died after the riot. Two men have been charged with assaulting Sicknick in the melee.

Investigators initially believed he was hit in the head with a fire extinguisher, based on statements collected early in the investigation, according to two people familiar with the case. And they later thought perhaps Sicknick may have ingested a chemical substance — possibly bear spray — that may have contributed to his death. 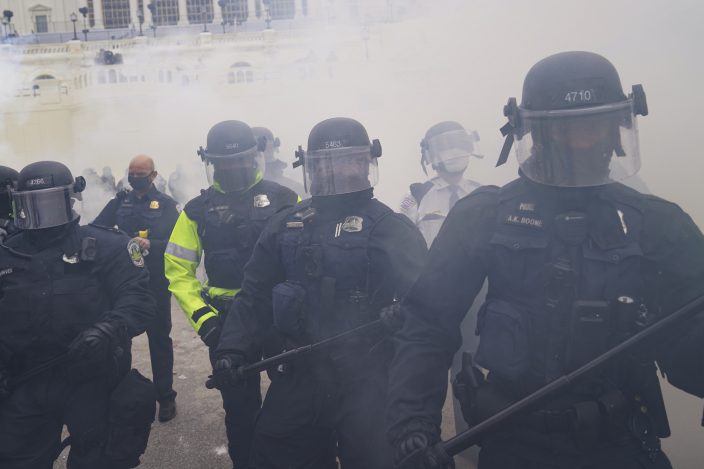 In this Wednesday, Jan. 6, 2021, photo, police form a line to try and prevent violent rioters from storming the Capitol, in Washington. The top watchdog for the U.S. Capitol Police will testify to Congress for the first time about the department’s broad failures before and during the Jan. 6 insurrection. Among them was missed intelligence and old weapons that officers didn’t feel comfortable using. (AP PhotoJohn Minchillo)

But the determination of a natural cause of death means the medical examiner found that a medical condition alone caused his death — it was not brought on by an injury. The determination is likely to significantly inhibit the ability of federal prosecutors to bring homicide charges in connection with Sicknick’s death.

Lawyers for the men charged with assault had no comment.

Sicknick died after defending the Capitol against the mob that stormed the building as Congress was voting to certify Joe Biden’s electoral win over Donald Trump. It came after Trump urged supporters on the National Mall to “fight like hell” to overturn his defeat.

Patty Tavatanakit finished with an ...

2 charged in assault of Capitol officer who died after riot

Capitol Police officer who died after riot to lie in honor