The prime minister of St. Vincent and the Grenadines made a heartfelt plea Monday to the international community to help his country recover from a volcanic eruption that has displaced 20,000 people, saying the island nation is “in its midnight hour of need.”

“Across our land, the faces of men and women are strained and anxious. They’re hurting badly,” Prime Minister Ralph Gonsalves told the U.N. Security Council, saying his country is confronting “a monumental challenge of humanitarian relief.”

La Soufrière, the volcano on the Caribbean island of St. Vincent, unleashed its first big eruption of ash and hot gas April 9, a day after the government ordered people to evacuate homes nearby. Subsequent explosions have followed. 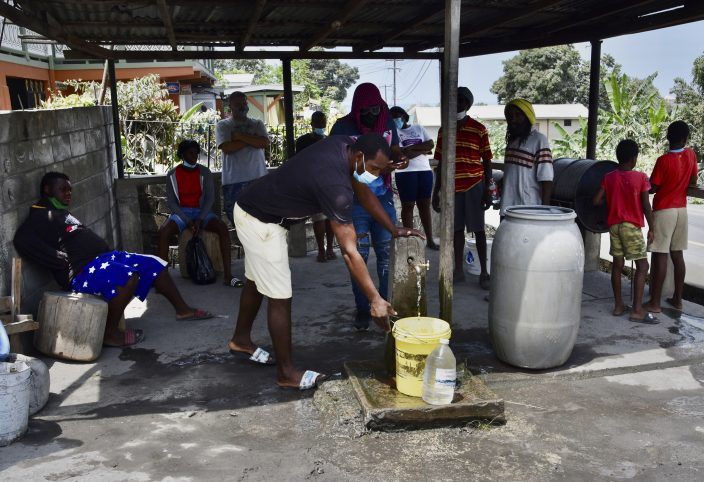 People collect water not contaminated by volcanic ash after the eruption of La Soufriere volcano in Wallilabou, on the western side of the Caribbean island of St. Vincent, Monday, April 12, 2021. (AP PhotoOrvil Samuel)

Thousands of people have been living in government shelters, some of which have been struggling to provide basic supplies, and water systems are shut down in many parts of the island.

The U.N.'s resident coordinator for Barbados and the Eastern Caribbean said last week that the island was facing “a humanitarian crisis that is growing and may continue for weeks and months.” It is happening as St. Vincent and the Grenadines contends with the coronavirus pandemic and the approaching hurricane season.

A Venezuelan navy ship has delivered water and other supplies to St. Vincent, and Caribbean island nations are sending aid. The U.N. has released $1 million from an emergency response fund, according to Secretary-General Antonio Guterres' office, and the world body will soon be launching an emergency appeal for money to fund the humanitarian effort and the early phase of recovery for the next six months.

People clean volcanic ash from the red roof of a home after La Soufriere volcano erupted, in Wallilabou, on the western side of the Caribbean island of St. Vincent, Monday, April 12, 2021. La Soufriere volcano fired an enormous amount of ash and hot gas early Monday in the biggest explosive eruption yet since volcanic activity began on the eastern Caribbean island of St. Vincent late last week. (AP PhotoOrvil Samuel)

Speaking at a virtual U.N. Security Council meeting about regional organizations, Gonsalves praised them and the U.N. for their assistance so far but said much more is needed.

“Without effective cooperation between our country, the United Nations and our regional and sub-regional organizations, our life and living will be wholly unbearable,” he said and urged the global community to be generous.

“Please help St. Vincent and the Grenadines in its midnight hour of need,” he said. 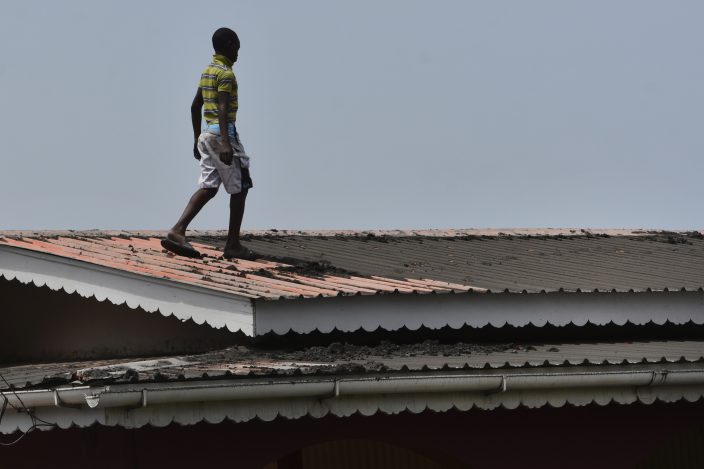 A youth walks on the roof of a home covered in volcanic ash after La Soufriere volcano erupted, in Wallilabou on the western side of the Caribbean island of St. Vincent, Monday, April 12, 2021. (AP PhotoOrvil Samuel)