The jury deliberating in the trial of Derek Chauvin, a former Minneapolis police officer charged in George Floyd 's death, is a racially diverse group that pledged before testimony began that they could set aside any preconceptions and decide the case based on the evidence.

The panel includes six white jurors and six Black or multiracial people. Seven are women; five are men. They include a chemist, a nurse, an auditor and a grandmother.

Here is a closer look at the panel, based on their answers to questionnaires they submitted to the court and questions during jury selection. They are identified by juror number only; the judge ordered their names withheld until after the trial due to the high-profile nature of the case. Their races and approximate ages were provided by the court. 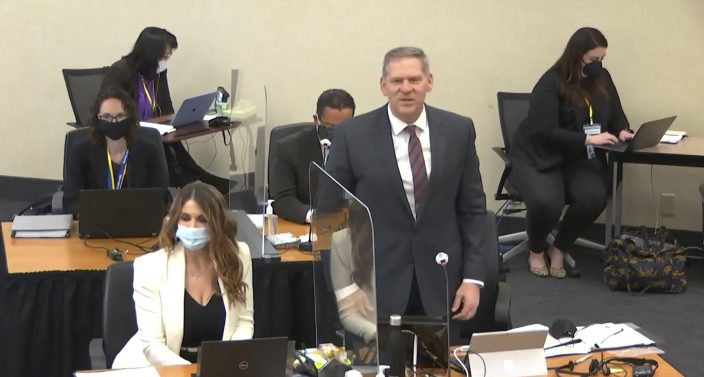 In this image taken from video, prosecutor Steve Schleicher introduces himself to potential jurors as Hennepin County Judge Peter Cahill presides over jury selection, Monday, March 22, 2021, at the Hennepin County Courthouse in Minneapolis, in the trial of former Minneapolis police officer Derek Chauvin. Chauvin is charged in the May 25, 2020, death of George Floyd. (Court TV via AP, Pool)

Juror No. 2 is a white man in his 20s who works as a chemist. With a combined degree in environmental studies and chemistry, he works in a lab where he tests samples for contaminants that may be harmful to the environment or worker hygiene. He said he enjoys outdoor activities, including Ultimate Frisbee, backpacking and biking. He and his fiancee visited George Floyd Square because Floyd's arrest was such a “transformative event for that area.”

Juror No. 2 said he worked for seven or eight summers at a camp through his childhood synagogue. He considers himself to be a logical thinker, and is the only juror on the panel who said he has never seen bystander video of Floyd's arrest. 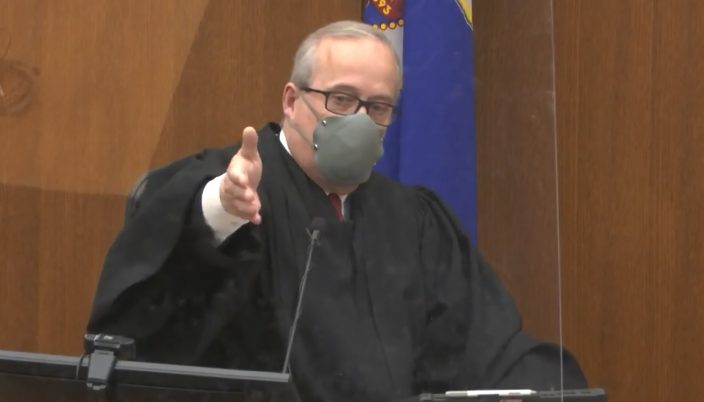 In this screen grab from video, Hennepin County Judge Peter Cahill presides over jury selection, Tuesday, March 23, 2021, in the trial of former Minneapolis police officer Derek Chauvin, in the May 25, 2020, death of George Floyd at the Hennepin County Courthouse in Minneapolis, Minn. (Court TV via AP, Pool)

Juror No. 9 is a multiracial woman in her 20s who has Type 1 diabetes. She grew up in northern Minnesota and has an uncle who is a police officer in that area. She described herself as a “go-with-the-flow, open-minded type of person" and said she was “super excited” to get her jury notice.

She said she only watched the bystander video once, and it gave her a “somewhat negative” impression of Chauvin. She said “that video just makes you sad. Nobody wants to see somebody die, whether it was his fault or not." She said there could be other possible explanations for Chauvin's actions, suggesting that Floyd might have been resisting, or civilian lives may have been in danger.

Juror No. 19 is a white man in his 30s. He is an auditor who said he tries to resolve conflict and make decisions based on facts, not emotions. He has a friend who is a canine officer with the Minneapolis Police Department.

He said he supports Black Lives Matter as a general concept but disagrees with some of the ways group members go about things. He has an unfavorable opinion of Blue Lives Matter. He wrote in his questionnaire that he heard Floyd was on hard drugs, but said he doesn’t believe it should have much impact on the case. “Whether you are under the influence of drugs doesn’t determine whether you should be living or dead," he said.

Juror No. 27 is a Black man in his 30s who immigrated to America more than 14 years ago. He went to school in Nebraska and moved to Minnesota in 2012. He manages eight people at his job in IT security, and speaks multiple languages including French. He and his wife have a dog but no children. He is a big Minnesota Gophers fan and loves the Vikings.

He said he had a somewhat negative view of Chauvin, based on clips of bystander video he saw on TV. He said he talked with his wife about Floyd's death: “We talked about how it could have been me, or anyone else," he said. Juror No. 27 said he hoped to learn at trial more about events that led up to Floyd's arrest.

Juror No. 44 is a white woman in her 50s, a single mom of two teenage boys. She is an executive in the nonprofit sector, working in health care advocacy. She said she had prior professional dealings with Minnesota Attorney General Keith Ellison in her job, but said it would not affect her impartiality.

She said she was exposed to a lot of news about this case, adding that the media is biased and doesn't have all the facts. She saw only part of the bystander video and said she has empathy for both Floyd and Chauvin. She said she had a somewhat negative view of Chauvin and a neutral opinion of Floyd, saying he was not a model citizen but didn't “deserve to die.”

She said she strongly agrees that the criminal justice system is biased against racial and ethnic minorities. “Not all police are bad," she said. "I don’t want them terrorized or disrespected. But bad police need to go.”

Juror No. 52 is a Black man in his 30s. He described himself as a friendly, positive person. He works in banking and likes sports, especially basketball. He coaches youth sports and writes creatively for a hobby, including scripts and poetry.

He said he had neutral opinions on Chauvin and Floyd. He said he had not seen the bystander video in its entirety but had seen clips of it two or three times. He said he had not posted about it on social media but had talked with family and friends and he wrote in his questionnaire that his opinion has been “why didn’t the other officers stop Chauvin.”

“I don’t know if he was doing something wrong or not, but somebody died … Even if you have no intention of doing something and something happens, somebody could’ve still intervened and prevented that," he said. He has a very favorable view of Black Lives Matter, saying, “Black lives just want to be treated as equals and not killed or treated in an aggressive manner simply because they are Black.”

Juror No. 55 is a white woman in her 50s who is a single parent of two children. Her youngest is a teenager. She works as an executive assistant at a health care clinic and sells Pampered Chef. She enjoys riding motorcycles, saying she picked it up because her late husband was interested in it and she rides with him now "in the spirit.”

She said she was “disturbed” by the bystander video and “I just couldn’t watch it anymore.” She said she has a somewhat unfavorable view of Chauvin because she feels he could’ve handled the situation differently. Still, she said she wouldn’t be able to form an opinion until she has all of the facts. She has a basic trust in police officers, and a somewhat unfavorable view of Black Lives Matter, saying: “All lives matter to me. It doesn’t matter who they are or what they are."

Juror No. 79 is a Black man in his 40s, a father who works in management and has lived in the Twin Cities area for about two decades after immigrating to America. He said he lives in a suburb and his home was burglarized once and police responded appropriately, even though the suspect was never caught.

He said he trusts police, but also feels it’s appropriate for jurors to evaluate an officer’s actions. “I would say it’s another pair of eyes and a new mind just looking at the action,” he said. He has a son about to take driver’s education. He said he would tell his son that when police stop him, he should cooperate. When asked if people who don’t cooperate have themselves to blame, he said: “Cooperation is good. … You help everybody.”

Juror No. 85 is a multiracial woman in her 40s, who is married and has a small child. She grew up in a river town and attended college in western Wisconsin. She is a consultant who helps companies with reorganizations and other transitions.

She said she has a neutral view of Floyd, writing in her questionnaire that she knew he died “as a result of this encounter” but did not know what his actions were before it happened. When pressed if she thought Chauvin was responsible, she said: “No, I never heard what a cause of death was."

She said she has a pretty strong faith in police, but that they are human and can make mistakes. She said she would generally agree that if someone does not cooperate, he or she might have themselves to blame. “You respect police and you do what they ask,” she said.

Juror No. 89 is a white woman in her 50s who lives in a suburb. She is a registered nurse currently working with patients on ventilators, including those with COVID-19, and has prior experience in cardiac care.

She was questioned extensively about her experience as a nurse, whether she has ever resuscitated anyone and how she would view medical evidence in the case. The woman said she would draw upon her knowledge to evaluate medical testimony, but said she would refrain from using her knowledge in the jury room.

She said she somewhat disagrees that it’s not right to second-guess decisions officers make.

Juror No. 91 is a Black woman in her 60s. She is a grandmother of two who studied child psychology and worked in marketing before she retired, and she felt strongly that being on a jury was her civic duty. The woman, who volunteers with underserved youth, said she watched the bystander video of Floyd’s arrest for about four or five minutes, then shut it off because “it just wasn’t something that I needed to see.”

She grew up about 10 or 15 blocks from the site of Floyd’s arrest, but said she moved decades ago and has no reason to revisit the area. She had a very favorable view of Black Lives Matter, writing in her questionnaire “I am Black and my life matters,” though she said she is not familiar with the organization. She has a relative who is a Minneapolis police officer.

Juror No. 92 is a white woman in her 40s who works in the commercial insurance business.