After decades of trying and throwing enough cash at the problem to fund a space program, Americans still stink at soccer.

But nobody plays smash-and-grab better than we do.

So it’s hardly coincidence that plans for a 20-team European Super League, a discussion that went nowhere for years, were finally made public now that a growing number of U.S. owners hold the reins to some of the most legendary clubs over there. Never mind that the proposal would hollow out Europe’s domestic leagues, destroy fan loyalties generations in the making, or drive a stake through the heart of the game’s enduring myth — that any team can rise or fall based solely on merit. 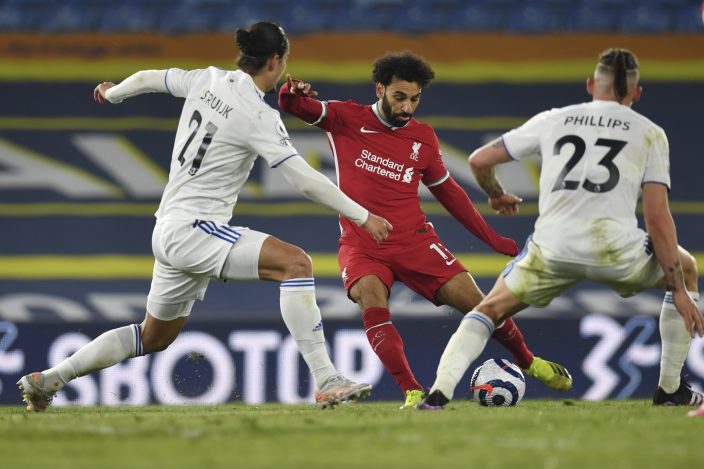 The guys behind the Super League are betting only suckers still care about that stuff.

“By bringing together the best clubs and best players in the world,” the group said in a statement Sunday, “the Super League will deliver excitement and drama never before seen in football.”

This scheme is not about staging grand competitions — soccer already provides those in abundance — it’s a cash grab. It’s about cost-certainty, sharing anticipated sky-high TV revenue, and essentially being guaranteed to turn a profit.

It would adopt the “closed-league” model that governs and enriches all the major pro sports in North America, including Major League Soccer; that is, once you’re in the club, no matter how lousy your team might be in any given season or seasons, no need to sweat getting dropped — the formal term is “relegated” — to a lower league. The spot is yours forever.

That’s why the late Art Modell, who owned the Cleveland Browns at the time, pulled then-commissioner Paul Tagliabue aside before introducing him at his first NFL meeting. He didn’t want the league’s new boss to get any fancy ideas about tinkering with the cash flow.

Of the dozen current teams already signed up for the Super League, four are owned by Americans: English Premier League giants Manchester United, Liverpool and Arsenal; and Italy’s Serie A club AC Milan.

That’s no coincidence, either.

Over the past five years, rich American owners have surpassed their Chinese counterparts in the boardrooms of European clubs. The Yanks now hold major stakes in one-fifth of the 60 teams playing top-flight soccer in the United Kingdom, Italy and France, according to data from KPMG Football Benchmark.

The reason for the accelerating U.S. involvement is simple: NFL, NBA, MLB and even NHL and MLS teams are comparatively very expensive already and boast boom-time valuations.

The Super League is attractive precisely because owners of those teams will get in at the ground floor of what looks like a very lucrative skyscraper. According to the group’s announcement, founding clubs will divide a $4 billion-plus (about 3.5 billion euros) startup fund — roughly $400 million per team — backed by debt-financing from JP Morgan Chase.

There’s no need, however, for fans of the beautiful game to start hyperventilating yet. Right now, despite plans to start as early as this summer, the Super League is no more than a mission statement.

It’s still trying to lure three more permanent members into signing up, and their first-choice members — Paris St. German of France’s Ligue 1, as well Bayern Munich and Borussia Dortmund of Germany’s Bundesliga — have distanced themselves from the proposal. The Super League also hasn’t provided any details on how it would select a rotating cast of five teams annually to fill out the 20-team enterprise.

Just as menacingly, fans across the continent and the game’s European establishment have already begun pushing back. Both sides have lawyered up as threats are being volleyed back and forth. Aleksander Ceferin, the president of European soccer’s governing body, UEFA, likened the proposal to “spitting in football fans’ faces” and with backing from FIFA, soccer’s international governing body, warned that players on Super League teams might be barred from the World Cup.

The pandemic devastated sports teams worldwide and resulted in losses — especially to the elite clubs — of hundreds of millions of dollars. And to be sure, European soccer could benefit from some reform. But the proposed Super League is not about saving anything more than the fat-cat owners’ already outsized slice of a pie that was more than a century in the making.

Jim Litke is a national sports columnist for The Associated Press.