A day after St. Louis was shut out for the second time in four games, DeJong got the offense going by clanging a solo shot off the left-field foul pole in the second inning for the first run allowed by Joe Ross (1-1) in three games this season after he sat out 2020 because of COVID-19 concerns.

DeJong later ended the right-hander's evening with another drive to left, this one off a high fastball after Dylan Carlson was walked intentionally to load the bases, making it 10-2 in the fifth.

St Louis Cardinals' Paul DeJong (11) celebrates his grand slam with teammates during the fifth inning of a baseball game against the Washington Nationals at Nationals Park, Monday, April 19, 2021, in Washington. (AP PhotoAlex Brandon)

Edman, who hit a 3-0 pitch, and Goldschmidt homered in the third off Ross, whose season ERA went from 0.00 to 5.87 after he gave up 10 runs in 4 1/3 innings. Justin Williams added a shot off Ross' replacement, Kyle Finnegan.

Quite a quick turnaround from a 2-0 defeat at the Philadelphia Phillies on Sunday, which left St. Louis with a .221 team batting average for the season and six losses in its past eight games. The Cards' other recent blanking? A 6-0 setback against Ross and Washington last Wednesday.

When St. Louis manager Mike Shildt was asked before Monday’s game about facing Ross again so soon, he replied: “I feel good about our plan.” 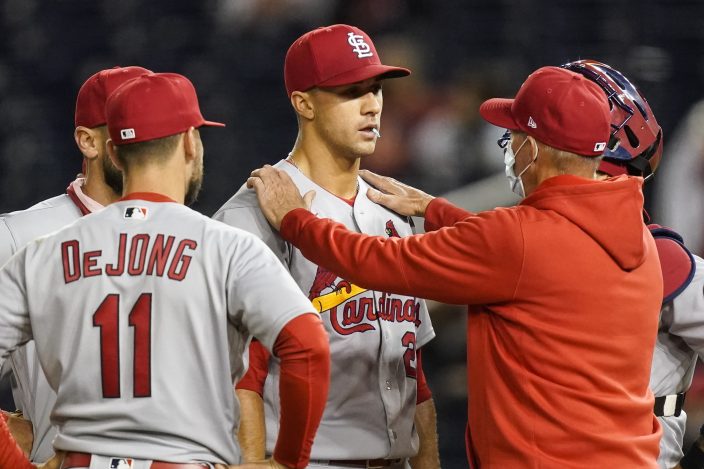 Guess he was right.

Even Matt Carpenter, dropped to seventh in the order after coming in batting .069, got in on the act, providing an RBI single in the fourth (he was thrown out trying to stretch it into a double). Flaherty's sacrifice bunt pushed across another run for a 6-0 lead.

Flaherty (3-0) is used to that sort of cushion. The Cardinals are averaging 11 runs in his four starts this season — and 3.25 runs in the 12 games started by other pitchers. 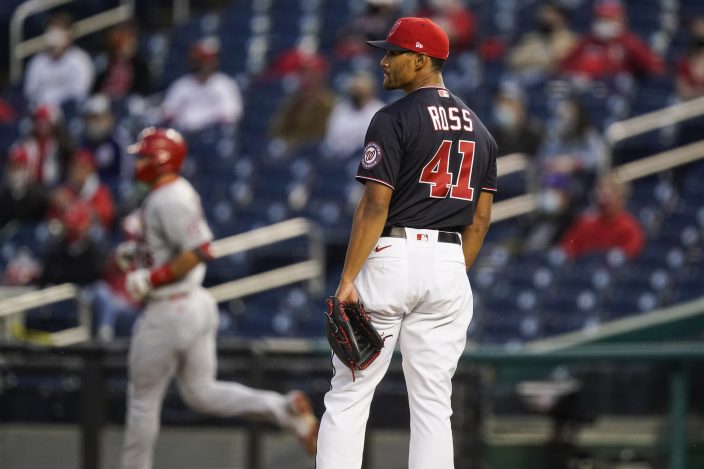 He is now 14-0 over his career when the Cardinals score at least five runs in one of his starts; the club is 17-0 in such games.

Washington dropped to 5-9 and here is a sign of where things stand for manager Dave Martinez at the moment: He turned to infielder Hernán Pérez to pitch the ninth, his second appearance in a blowout loss against St. Louis in less than a week. 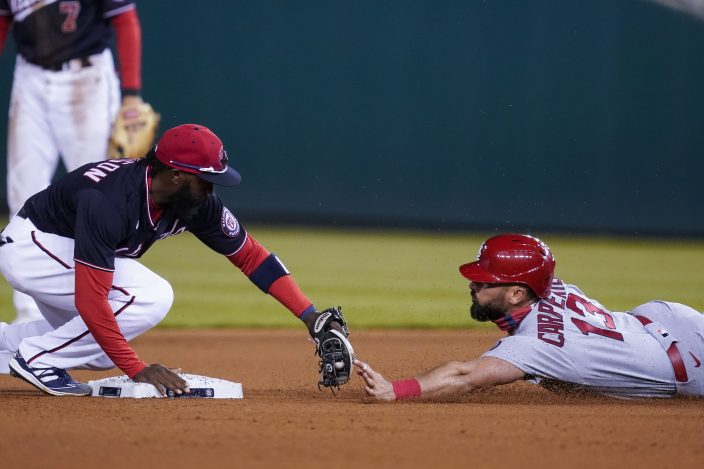 St Louis Cardinals' Matt Carpenter, right, is out at second base on the tag by Washington Nationals second baseman Josh Harrison, left, as he tries to reach second on his RBI single, during the fourth inning of a baseball game at Nationals Park, Monday, April 19, 2021, in Washington. (AP PhotoAlex Brandon)

When Yan Gomes swung and missed at an 81 mph pitch in the third, Flaherty had his second strikeout of the evening and the 500th of his big league career in 80 games, making him the first Cardinals pitcher to reach that milestone in fewer than 100 appearances.

Cardinals: OF Tyler O’Neill (right groin) is expected to come off the 10-day injured list for Friday's start of a seven-game homestand. ... OF Harrison Bader (right forearm) planned to take batting practice on the field Monday and has been throwing from 120 feet for several days. ... RHP Miles Mikolas (right shoulder) threw mostly fastballs during a simulated live batting practice Sunday and should be “ready to start spinning some breaking balls” during his next session, Shildt said.

Nationals: LHP Luis Avilán, 31, decided to have Tommy John surgery after tearing his UCL, Martinez said. Avilán went on the IL on Friday. “Hopefully,” Martinez said, “he can come back and pitch again. ... He knows what he’s up against, but he’s going to do everything he can.”