Stephen Curry hit 10 3-pointers and scored 49 points to extend his sizzling stretch, leading the Golden State Warriors to a 107-96 victory over the Philadelphia 76ers on Monday night.

Curry’s 3 that tied the game at 86-all gave him 11 straight games with 30 or more points, topping Kobe Bryant for the most by any player 33 or older. Curry, who turned 33 last month, also has the longest 30-point game streak by a Warriors player since Wilt Chamberlain in 1964.

Curry had his fifth 40-point game in April and topped Bryant and Michael Jordan for most 40-point games in a month by a player 33 or older. 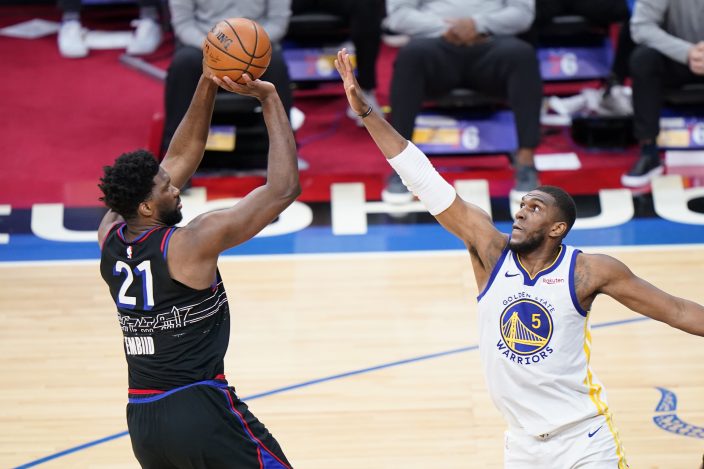 Philadelphia 76ers' Joel Embiid, left, goes up for a shot against Golden State Warriors' Kevon Looney during the second half of an NBA basketball game, Monday, April 19, 2021, in Philadelphia. (AP PhotoMatt Slocum)

He buried 3s late in the fourth for leads of 91-90 and 96-92 to whisk the Warriors past the top team in the Eastern Conference. Joel Embiid, who scored 28 for the 76ers, threw the ball away and Andrew Wiggins scored on the other end to put away the game.

The Curry brothers went head-to-head — yes, in the City of Brotherly Love — in a spirited showdown from the opening minutes when Seth buried a 3 over his sibling. Steph answered with a tough 3 at the end of the first quarter and he had 20 points at the half. 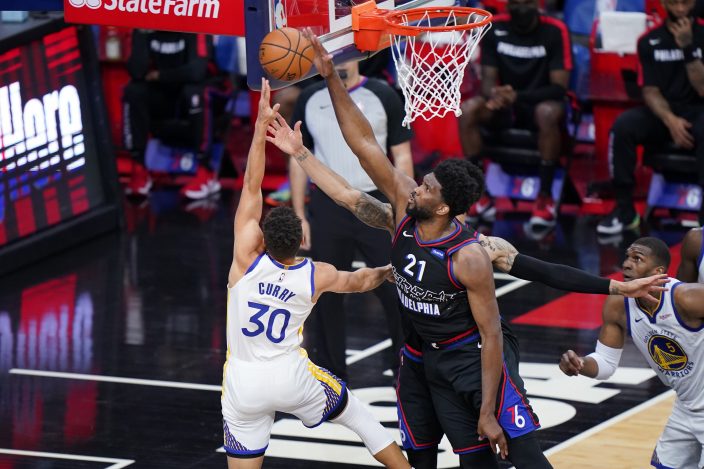 Even for Curry, his recent stretch of sensational shooting ranked among the best of his career. He averaged 43.8 points (.573 FG%, .545 3P%, .906 FT%), 5.8 rebounds and 5.0 assists in four games last week. Curry even shook off an injured left ankle that he turned in Saturday’s game against Boston to torch the 76ers.

“There’s something beautiful about it. It really is an art,” Warriors coach Steve Kerr said. “What he's doing is amazing to watch. Nobody in the history of this game has ever done what he’s doing right now. And I’m talking the full gamut of shooting off the dribble, off the screen, running around like a madman when he’s off the ball.”

In the history of the game? 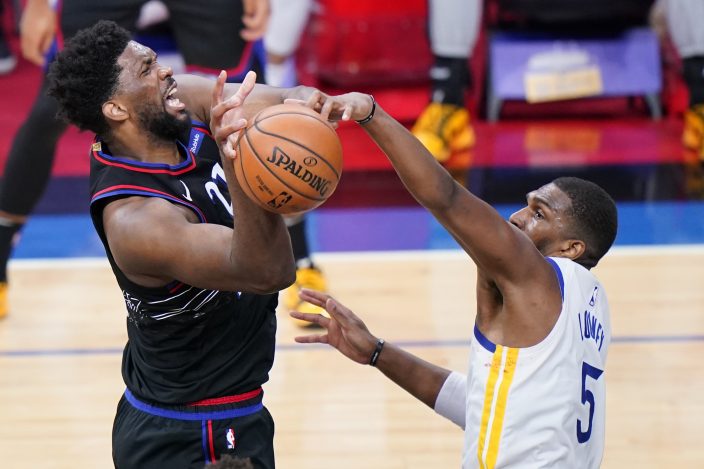 Sixers coach Doc Rivers agreed, even insisting in an argument with his older brother in Chicago that Curry’s season rivals anything Jordan ever accomplished.

“I don’t know if I’ve ever seen anything like the run he’s on,” Rivers said. “I guarantee you there’s no one that has scored (points) in the way he has.” 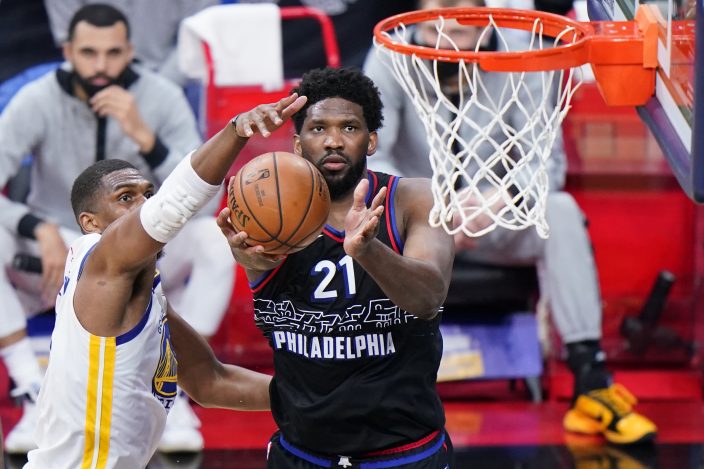 Philadelphia 76ers' Joel Embiid, right, goes up for a shot against Golden State Warriors' Kevon Looney during the second half of an NBA basketball game, Monday, April 19, 2021, in Philadelphia. (AP PhotoMatt Slocum)

Seth Curry scored 15 points and Danny Green hit four 3s for 12 points. Embiid had 13 rebounds and was 11 of 14 from the free throw line.

Curry showed he was still the best player on the court. Golden State’s 29-29 record could keep Curry from MVP consideration but the franchise’s career leading scorer — who hit at least 10 3s for the sixth time this season — is still one of the best in the league. 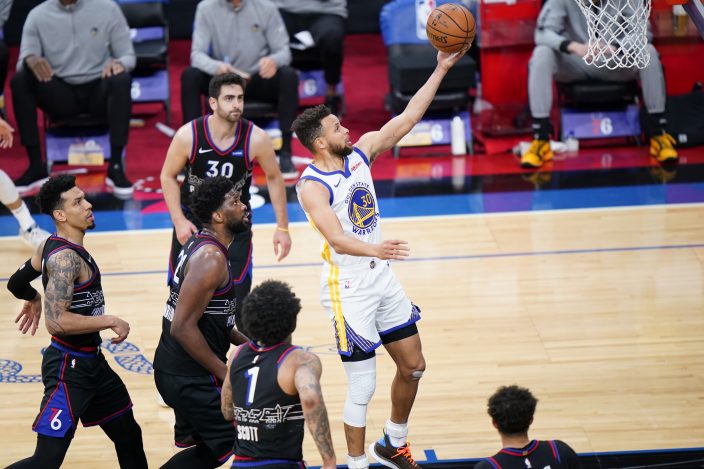 Golden State Warriors' Stephen Curry, right, goes for a shot during the first half of an NBA basketball game against the Philadelphia 76ers, Monday, April 19, 2021, in Philadelphia. (AP PhotoMatt Slocum)

Warriors: Signed G Gary Payton II to a second 10-day contract. ... There was no timeline on when F Juan Toscano-Anderson will return from the concussion protocol. ... C James Wiseman will rehab the torn meniscus in his right knee at the Warriors’ facility.

76ers: Furkan Korkmaz and Mike Scott replaced Simmons and Harris in the starting lineup. ... G George Hill made his 76ers’ debut after he was acquired at the trade deadline. He’d been out since late January after he had surgery on his right thumb. “We’re not going to play him a lot of minutes in a row right now. We’re just going to try to ease him in,” Rivers said. Hill averaged 11.8 ppg and 3.1 apg with Oklahoma City. ... Embiid received the NBA Cares Community Assist Award for March for his continued his efforts to combat homelessness in Philadelphia.

Doc Rivers is both coach and father-in-law to Seth Curry. Rivers laughed when he said that he sees retired NBA star Del Curry more than any other member of the family. Rivers said when he visited his granddaughter on Sunday, Steph Curry also was there to see his niece.