A Chinese American mother in the Boston suburbs is sending her sons to in-person classes this month, even after one of them was taunted with a racist “slanted-eyes” gesture at school, just days after the killings of women of Asian descent at massage businesses in Atlanta.

In the Dallas area, a Korean American family is keeping their middle schooler in online classes for the rest of the year after they spotted a question filled with racist Chinese stereotypes, including a reference to eating dogs and cats, on one of her exams.

As high schools and elementary schools across the country gradually re-open for full-time classes, Asian American families are wrestling with whether to send their children back out into the world at a time when anti-Asian hostility and violence is on the rise. 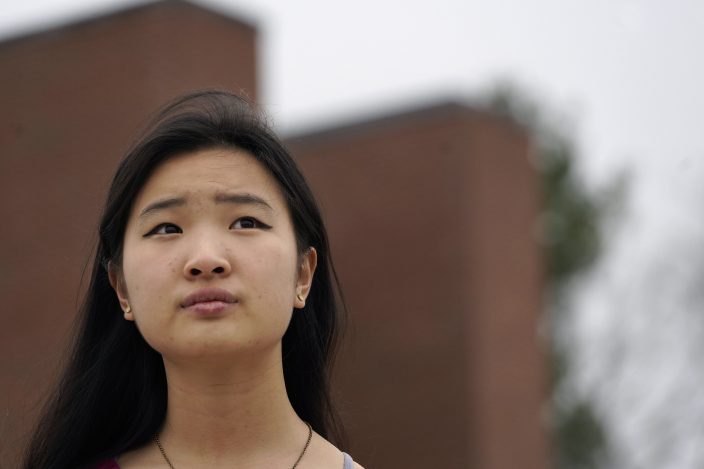 High school student Grace Hu, 16, of Sharon, Mass., stands for a photograph near Sharon High School, Sunday, April 11, 2021, in Sharon. Hu, who plans to to go back to in-person classes in April, helped organize a rally in Boston in early April against anti-Asian hate, but said she's not concerned about facing vitriol when her school reopens fully. The district, located about 27 miles south of Boston, has a sizable Asian student population and has felt generally safe and welcoming to her. (AP PhotoSteven Senne)

Some Asian American parents say they’re content to keep their children in virtual classes, especially with the school year winding down and COVID-19 cases rising in places. Others are conceding to adolescents craving normalcy, while still others refuse to shield their youths from bigotry.

Asian American students have the highest rates of remote learning more than a year after the coronavirus pandemic shuttered school buildings and forced districts to pivot to online classes. A federal government survey released earlier this month found just 15% of Asian American fourth graders were attending classes in-person as of February, compared with more than half of white fourth graders.

Those rates appear to be rising in some cities, but are still far lower than those of Black, Latino and white students. In Sacramento, Boston and Chicago public schools, for example, roughly a third of Asian American students are expected to return to in-person classes this month, compared with some 70% of white students, according to the most recent district data available. High school student Grace Hu, 16, of Sharon, Mass., stands for a photograph near Sharon High School, Sunday, April 11, 2021, in Sharon. Hu, who plans to to go back to in-person classes in April, helped organize a rally in Boston in early April against anti-Asian hate, but said she's not concerned about facing vitriol when her school reopens fully. The district, located about 27 miles south of Boston, has a sizable Asian student population and has felt generally safe and welcoming to her. (AP PhotoSteven Senne)

Asian American youths have also not been spared anti-Asian harassment. A September report by Stop AAPI Hate found about 25% of Asian American youths surveyed experienced discrimination, including verbal harassment, social shunning, cyberbullying and physical assault, during the pandemic. The San Francisco-based group, which tracks incidents of discrimination against Asian Americans and Pacific Islanders, also says more than 12% of its reported incidents involved youths ages 17 and under.

Concerns about virus spread and rising racism are factors in the in-person learning disparities, but many Asian families also benefit from living in multi-generational households where grandparents and other relatives can help out, said Peter Kiang, director of Asian American Studies at the University of Massachusetts in Boston.

“These ethnic-defined support systems have been operating for more than a year already while parents are out working long hours, so there is no urgency to return to in-person classrooms,” he said. 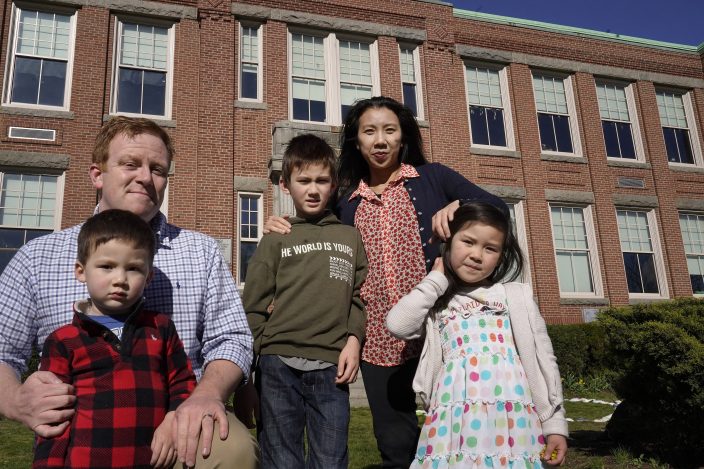 John Horrigan, top left, and his wife Kim Horrigan, top right, stand for a photograph with their children, from the left, William, 3, Conor, 8, and Sofia, 4, all of Quincy, Mass., outside Montclair Elementary School, in Quincy, Tuesday, April 13, 2021. Kim said she and her husband have struggled all year with their decision to keep their 8-year-old son in remote learning due to the coronavirus pandemic. (AP PhotoSteven Senne)

Another factor is that many Asian Americans live in major urban areas like Boston where schools are only now starting to widely re-open, said Robert Teranishi, a professor of education and Asian American studies at UCLA. Meanwhile San Francisco, where about a third of public school students are of Asian descent, has no timetable for the return of middle and high school students.

For Grace Hu, a 16-year-old in Sharon, Massachusetts, who has been learning remotely all school year, the decision to go back to in-person classes later this month was easy.

The high school sophomore helped organize a recent rally against anti-Asian hate in Boston, but said she's not concerned about facing vitriol in school. The district, about 25 miles (40 kilometers) south of Boston, has a sizeable Asian American student population and she's felt generally safe and welcomed. 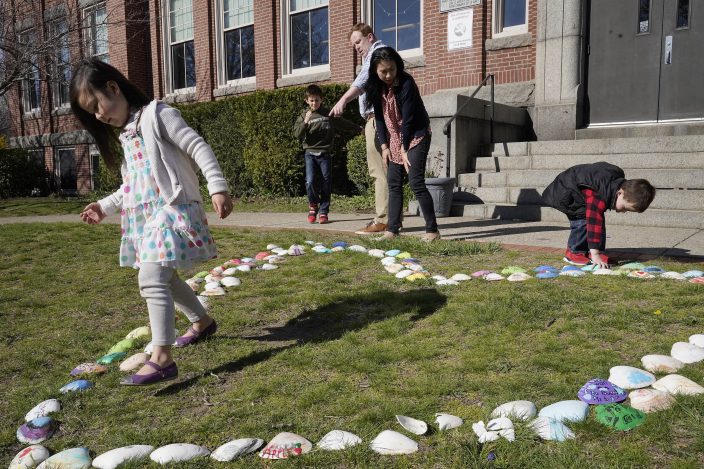 Sofia Horrigan, 4, of Quincy, Mass., left, examines a heart made of seashells with family members, from behind left, Conor, 8, John Horrigan, his wife Kim, and their son William, 3, right, while gathered for a photograph, Tuesday, April 13, 2021, at the school, in Quincy. Kim said she and her husband have struggled all year with their decision to keep their 8-year-old son in remote learning due to the coronavirus pandemic. (AP PhotoSteven Senne)

Closer to Boston, in Quincy, a city with the highest concentration of Asian Americans in the state, Kim Horrigan said she and her husband have struggled with their decision to keep their 8-year-old son in remote learning this school year, but for altogether different reasons.

Horrigan said she’s never really considered racism a threat to her family, even though there's been tension in Quincy over the years as the Asian American community has grown to roughly 25% of the population, transforming a city famous for being the birthplace of two American presidents.

Instead, she's most concerned about exposing her household, which includes her Chinese immigrant parents, who are in their 70s, and two younger children, to COVID-19. At the same time, Horrigan worries about her son falling behind the longer he's home.

“We’ve taken so many precautions and sacrificed so much,” she said. "Why would we drop our guard now, with just a few weeks left?”

Meanwhile, in Needham, another Boston suburb, Denise Chan said she hasn’t second-guessed placing her three young sons back in classes full-time in recent weeks, even after the “slanted-eyes" incident.

Chan said another student approached her 11-year-old son at lunchtime, made a comment about Korean eyes and pulled his eyelids upward in the mocking gesture as other students looked on.

She said her son called out the racist remark, and his teacher eventually had the student apologize and promised racism would be addressed in the class curriculum.

“If the teacher did not deal with it the way she did, I would be more worried about sending him back,” said Chan. “I was also proud of the way my son handled it. We’ve talked about why it’s important to speak out.”

But in Carrollton, Texas, Joy Lim said her parents decided to keep her younger sister in remote learning after publicly raising concerns about the racist test question.

The 21-year-old college student said the decision is in part because of fear of reprisals if the sixth-grader returns to classes. The district denounced the exam question as “derogatory and hurtful” and placed three teachers on administrative leave.

“What’s been most discouraging is that people are still defending these educators,” Lim said. “These aren’t joking questions. They’re cruel.”

Swan Lee, a Chinese American mother in the Boston suburb of Brookline, isn’t so sure keeping Asian American students at home is the answer to what ails the country.

Her two high school-age teens are preparing to return to classes full-time later this month, and she's emphasized the importance of being strong and staying positive, though she admits she's worried about what might happen outside the relative safety of the school building.

“It’s not about protecting and shielding them. That’s too passive and too defeatist,” Lee said. “It’s about confronting this in a constructive manner. People need to understand this kind of racism is wrong. That’s the only way it goes away.”