Brandon Woodruff and three relievers combined on a two-hitter and Luis Urias homered in his return to Petco Park before leaving with an injury as the Milwaukee Brewers beat Joe Musgrove and the San Diego Padres 3-1 Monday night.

Billy McKinney also homered off Musgrove (2-2), who set a career-high with 13 strikeouts in his first home start since throwing the Padres' first no-hitter on April 9 at Texas. The big right-hander, who grew up in suburban El Cajon, is 0-2 since throwing the no-no. 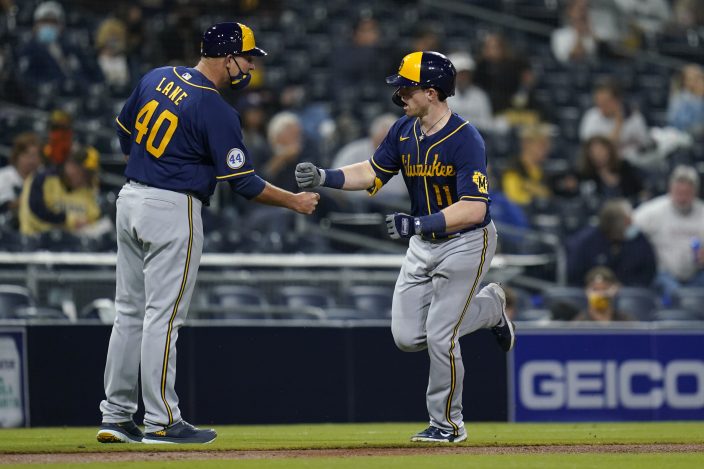 Milwaukee Brewers' Billy McKinney, right, is greeted by third base coach Jason Lane (40) after hitting a home run during the fifth inning of a baseball game against the San Diego Padres, Monday, April 19, 2021, in San Diego. (AP PhotoGregory Bull)

Musgrove made just two mistakes and both went over the right field wall. Urias homered on Musgrove's first pitch of the third, his second, to tie the game at 1. McKinney homered with one out in the fifth for a 2-1 lead. It was his first.

Musgrove allowed two runs and four hits in seven innings while walking one. His previous career high for strikeouts was 11 against St. Louis on Sept. 20 while he was with Pittsburgh. He was traded to his hometown Padres on Jan. 19.

Musgrove also caught a liner right back at him by Jackie Bradley Jr. in the sixth.

Woodruff (1-0) held San Diego to one run and one hit in six innings, struck out seven and walked three. The only hit he allowed was a single by Jake Cronenworth in the first, one batter before Fernando Tatis Jr. hit an RBI groundout.

J.P. Feyereisen walked one in the seventh, Brent Suter gave up a single to Caratini in the eighth and Josh Hader pitched the ninth for his second save.

Urias, who played with the Padres in 2018-19, was back at Petco Park for the first time since being traded to Milwaukee along with left-hander Eric Lauer for outfielder Trent Grisham and starter Zach Davies on Nov. 27, 2019. The Padres sent Davies and four prospects to the Chicago Cubs for Yu Darvish and Victor Caratini on Dec. 29. 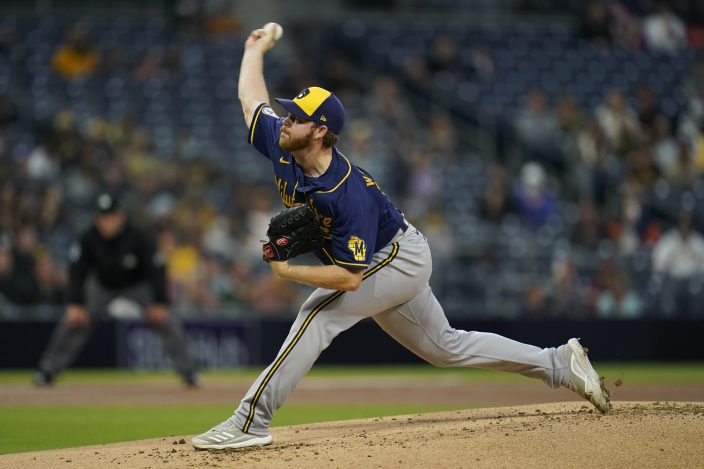 Urias left with a calf injury in the fourth.

Brewers: 2B Kolten Wong (left oblique strain) is with the team and eligible to come off the 10-day injured list on Tuesday but likely won't be activated until a weekend series at Chicago, manager Craig Counsell said.

San Diego Padres shortstop Fernando Tatis Jr. gets ready to toss the ball to first for the out on Milwaukee Brewers' Travis Shaw during the sixth inning of a baseball game, Monday, April 19, 2021, in San Diego. (AP PhotoGregory Bull)

Padres: Manager Jayce Tingler said RHP Dinelson Lamet could be activated and make his first start of the season as soon as Wednesday's series finale. He's been working his way back from elbow discomfort that forced him out of his final regular-season start of 2020 and caused him to miss the playoffs. ... C Austin Nola (broken left middle finger) worked out in San Diego on Monday and is expected to begin playing games at the alternate training site in Arizona. 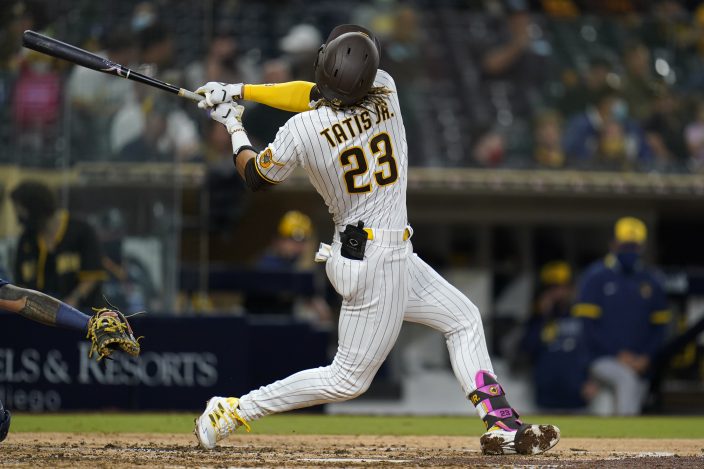