Pakistan’s Parliament is expected to consider a resolution on Tuesday about whether the French envoy should be expelled over the publication of controversial cartoons depicting Islam’s Prophet, testing whether the government gives in to threats from radical Islamists.

Under the resolution, cases against Islamists over deadly anti-France protests would be withdrawn, the country's interior minister said.

The fate of the resolution was unclear, but Parliament's mere discussion of the matter would be a test of whether Prime Minister Imran Khan succumbs to pressure from the hardline - and outlawed - Tehreek-e-Labaik Pakistan party. 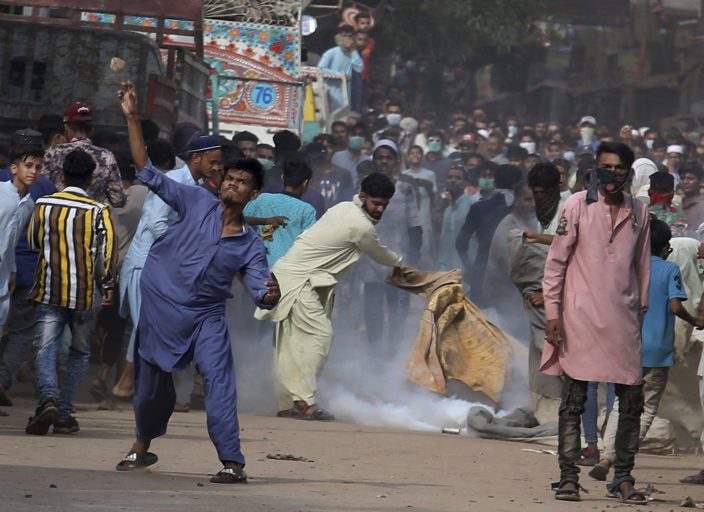 A supporter of Tehreek-e-Labiak Pakistan, a banned Islamist party, throws a stone while another tries to extinguish a tear gas canister fired by police to disperse protests over the arrest of their party leader Saad Rizvi, in Karachi, Pakistan, Monday, April 19, 2021. The outlawed Islamist political group freed 11 policemen almost a day after taking them hostage in the eastern city of Lahore amid violent clashes with security forces, the country's interior minister said Monday. (AP PhotoFareed Khan)

Sheikh Rashid Ahmad, Pakistan's interior minister, announced the proposal in a video message after overnight talks with representatives of the the party, which has been rallying since last week for the expulsion of the French ambassador.

The group's supporters are angered over the cartoons' publication in France. They also are protesting the April 12 arrest of their leader, Saad Rizvi, a cleric who emerged as the leader of the group in November after the sudden death of his father, Khadim Hussein Rizvi. His party wants French products boycotted and the French ambassador expelled under an agreement signed between the government and Rizvi’s party in February.

However, the government has said it only committed to discussing the matter in Parliament before Tuesday, April 20. That's when Ahmad said a resolution will be moved by Kahn's government in the National Assembly, the lower house of Parliament, to discuss the expulsion of the French ambassador.

Khan's government holds a simple majority in the National Assembly.

Rizvi's supporters took to streets across the country last week when police arrested him for threatening the government with protests over the demand to expel the French envoy. The reaction from Rizvi’s supporters against his arrest was so swift that violence quickly spread across the country, killing four police officers and at least six demonstrators.

As authorities dispatched paramilitary troops to help police in a crackdown on Rizvi's supporters, Khan banned news coverage of Rizvi’s party by the local media.

The blackout of protests by Rizvi's supporters remained in place in Pakistan, where the country's powerful military uses various tactics to stifle press freedom. Pakistan sits at 145 in the world freedom index, according to a report released by the Reporters Without Borders, which says it is among those countries where the military and agencies control journalists.

The report said that the vast majority of media outlets reluctantly comply with the red lines imposed by the military. It added, however, that “Pakistani censorship apparatus is still struggling to control social media, the only space where a few critical voices can be heard.”

Pakistani security forces in a series of operations cleared almost all sit-ins, but Rizvi's supporters are still rallying in Lahore, the capital of eastern Punjab province where they attacked a police station over the weekend. The supporters took 11 police officers hostage and freed them Monday after talks with the government.

Ahmed said his government's talks with Rizvi's group will continue and he will share more details later Tuesday.

The latest development comes a day after Khan, in a televised address defended his decision of not expelling the French envoy, saying it could affect Pakistan’s trade ties with the European Union.

The tensions originated with last year’s remarks by France’s president who defended as freedom of speech issue the publication of caricatures of Islam’s Prophet Muhammad by a satirical newspaper, drawing condemnation from across the Muslim world.

Rizvi’s party supports the country’s controversial blasphemy laws and has a history of staging violent rallies to influence the government.

Int'l tribunal stays $5.8B fine on Pakistan in mining case