The European Union expanded its sanctions against Myanmar’s military leaders and army-controlled companies ahead of a regional meeting to discuss the worsening crisis after army leaders deposed the elected government.

The Council of the European Union's latest sanctions target 10 individuals and two military-controlled companies already subject to sanctions by the U.S., Britain and other governments.

It is unclear if such moves are having any impact as the military escalates its efforts to crush opposition to its seizure of power. Myanmar's economy is already in crisis, worsened by the coronavirus pandemic and by the mass civil disobedience movement that arose following the Feb. 1 coup. 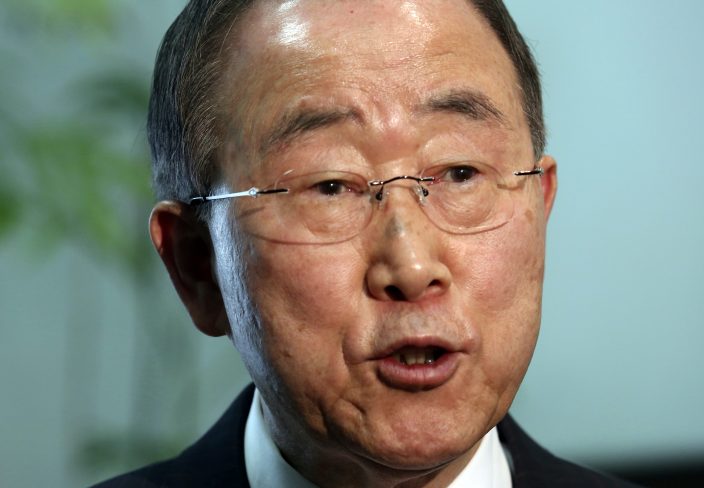 FILE - In this Dec. 3, 2018, file photo, former U.N. Secretary-General Ban Ki-moon speaks during an interview with The Associated Press in Tokyo. Ban is urging the United Nations and Southeast Asian countries to take swift and "strong action" to stop the deadly crackdown that has followed the military coup in Myanmar. Ban exhorted the U.N. Security Council Monday, April 19, 2021, to act immediately to halt the violence and protect civilians, "using a range of tools at the council's disposal." (AP PhotoKoji Sasaha, File)

The EU said the number of individuals sanctioned was expanded to 35 people it said were responsible for undermining democracy and the rule of law, for repressive decisions and for serious human rights violations.

All are subject to having their assets frozen, travel banned and other measures. EU citizens and businesses are banned from doing business or providing funds to them without special permission. 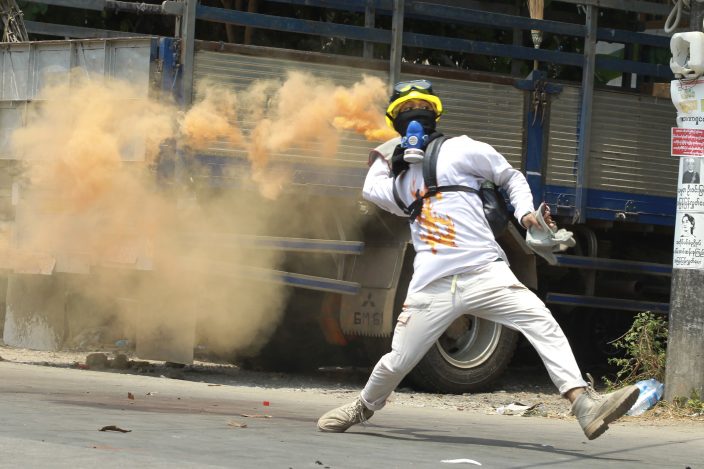 FILE - In this March 27, 2021, file photo, an anti-coup protester throws a smoke bomb against police during a crackdown in Thaketa township in Yangon, Myanmar. Former United Nations Secretary General Ban ki-Moon is urging the world body and Southeast Asian countries to take swift and "strong action" to stop the deadly crackdown that has followed a military coup in Myanmar. (AP PhotoFile)

“Today’s decision is a sign of the EU’s unity and determination in condemning the brutal actions of the military junta, and aims at effecting change in the junta’s leadership," the EU said in a statement.

“Today’s decision also sends a clear message to the military leadership: continuing on the current path will only bring further suffering and will never grant any legitimacy," it said.

Since the coup, security forces have killed at least 738 protesters and bystanders, according to the Assistance Association for Political Prisoners, which monitors casualties and arrests. It says more than 3,200 people are still detained, among the nation's deposed civilian leader Aung San Suu Kyi and President Win Myint. 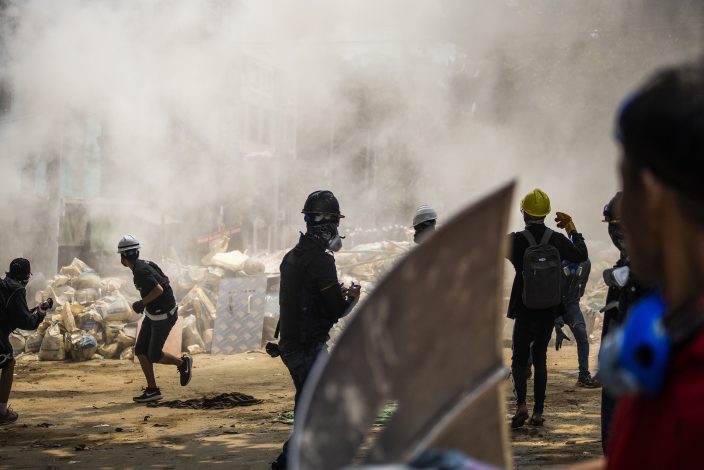 FILE - In this March 14, 2021, file photo, anti-coup protesters scatter during an ongoing police crackdown during a protest in Sanchaung township, Yangon, Myanmar. Protests in Myanmar's largest city turned deadly in March as security forces continued their violent crackdown against dissent following the military coup. Former United Nations Secretary General Ban ki-Moon is urging the world body and Southeast Asian countries to take swift and "strong action" to stop the deadly crackdown in the wake of a military coup in Myanmar. (AP PhotoFile)

The EU already had an embargo on sales to Myanmar of arms and equipment that can be used for internal repression; an export ban on dual-use goods for use by the military and border guard police; export restrictions on equipment for monitoring communications that could be used for internal repression, and a prohibition on military training for and military cooperation with the army.

Last week, the U.S. S&P 500 said it was removing India's Adani Ports and Special Economic Zone Ltd. from its sustainability index due to its alleged dealings with Myanmar authorities. Adani did not respond to a request for comment on that move.

Former U.N. Secretary-General Ban Ki-moon on Monday exhorted the U.N. Security Council to act immediately to halt the violence and protect civilians. So far, the council has not taken such action, which would likely be blocked by China and Russia.

The Association of Southeast Asian Nations — which is holding a summit on Myanmar this month — maintains a policy of “non-interference'' in each others' political matters and has rejected the idea of imposing sanctions against the junta.

Ban urged ASEAN to send a high-level delegation to Myanmar. He said he had tried unsuccessfully to make a diplomatic visit himself.