The U.S. ambassador in Moscow said Tuesday he will head home for consultations — a move that comes after the Kremlin prodded him to take a break after Washington and Moscow traded sanctions.

Ambassador John Sullivan said in a statement that he is returning to the United States this week to discuss U.S.-Russian ties with members of President Joe Biden's administration. He emphasized that he would come back to Moscow within weeks.

“I believe it is important for me to speak directly with my new colleagues in the Biden administration in Washington about the current state of bilateral relations between the United States and Russia," Sullivan said in a statement issued by the embassy. “Also, I have not seen my family in well over a year, and that is another important reason for me to return home for a visit.” 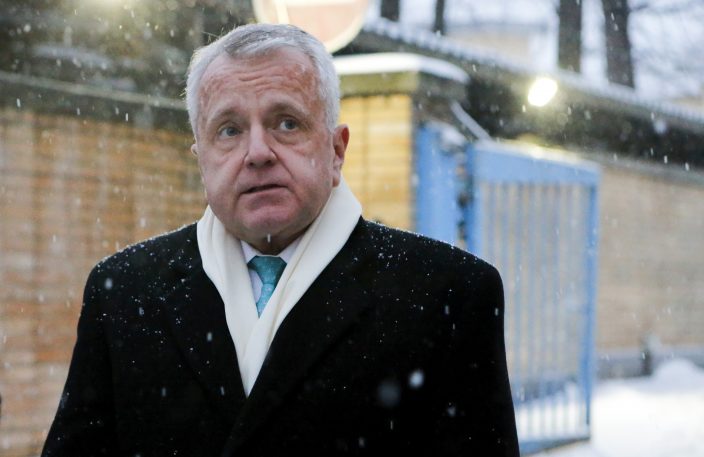 FILE - In this file photo taken on Thursday, Jan. 30, 2020, U.S. Ambassador to Russia John Sullivan speaks to the media after visiting Paul Whelan, a former U.S. marine who was arrested for alleged spying in Moscow, Russia. Sullivan said he was heading home for consultations and would return to Moscow in the nearest weeks. (AP PhotoAlexander Zemlianichenko Jr, File)

Sullivan's departure comes after Russia on Friday stopped short of asking Sullivan to leave the country, but said it “suggested” that he follows the example of the Russian ambassador to Washington who was recalled for consultations last month after President Joe Biden's description of President Vladimir Putin as a “killer.” Russia has set no time frame for Anatoly Antonov's return to Washington.

On Thursday, the Biden administration announced sanctions on Russia for interfering in the 2020 U.S. presidential election and involvement in the SolarWind hack of federal agencies — activities Moscow has denied. The U.S. ordered 10 Russian diplomats expelled, targeted dozens of companies and people and imposed new curbs on Russia’s ability to borrow money.

Russia denounced the U.S. move as “absolutely unfriendly and unprovoked” and retaliated by ordering 10 U.S. diplomats to leave, blacklisting eight current and former U.S. officials and tightening requirements for the U.S. Embassy operations.

While ordering the sanctions, Biden also called for de-escalating tensions and held the door open for cooperation with Russia in certain areas. Russia said it was studying the offer.

"I will return to Moscow in the coming weeks before any meeting between Presidents Biden and Putin,” Sullivan said in Tuesday's statement.

Charges were expected to be filed ...

AP source: No cutting players because they are unvaccin ...

Lavrov says US policy towards Russia is 'dumb,' ineffective

Kremlin: Putin's offer of a call with Biden was to save ties

Russia warns it may scale up response to Biden's statement

Putin: US Capitol unrest was a 'stroll'

Putin holding off on US presidential congratulations