Gandhi, 50, said in a tweet on Tuesday that “All those who’ve been in contact with me recently, please follow all safety protocols and stay safe.” Gandhi last week called off political rallies in West Bengal state where provincial elections are being held.

On Monday, another top Congress party leader and former prime minister, Manmohan Singh, also tested positive and was hospitalized as a precaution. Singh, 88, had a mild fever on Sunday. 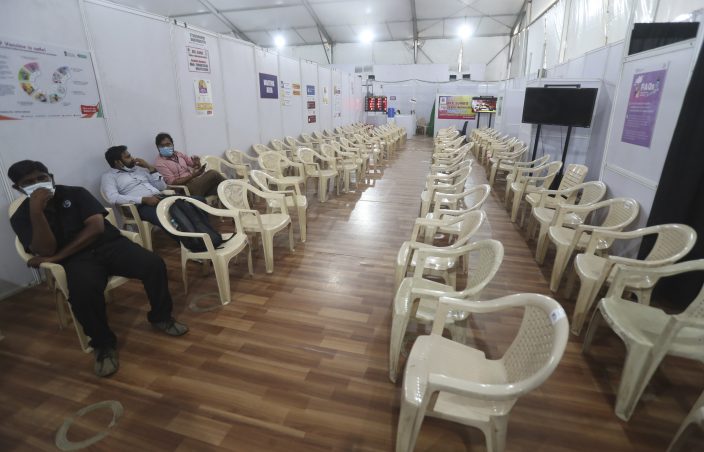 Health workers sit in the waiting area of vaccination center which has been closed because of shortage of the COVID-19 vaccine in Mumbai, India, Tuesday, April 20, 2021. India has decided to vaccinate everyone above 18 from May 1 as the government battles record high surge in coronavirus cases in the country. (AP PhotoRafiq Maqbool)

A senior Congress party leader, P. Chidambaram, said on Tuesday that Singh ”is stable and the progress is good.”

India’s Health Ministry reported 259,170 new infections and 1,761 deaths on Tuesday. The country has reported daily infections above the 200,000 mark for six days. 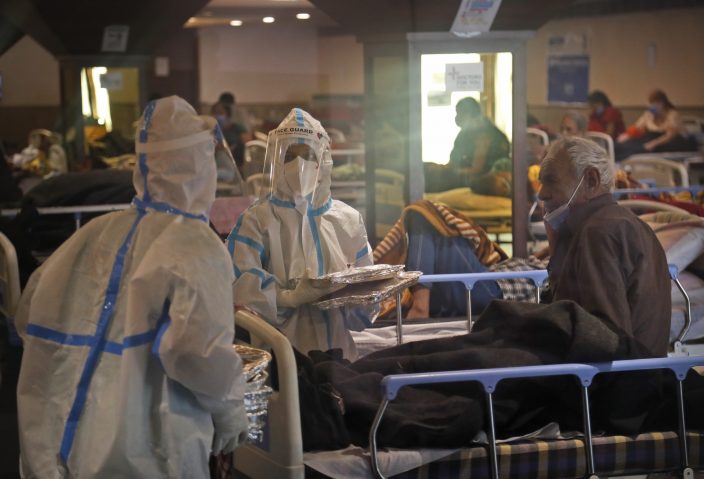 A health worker distributes food packets inside a quarantine center for COVID-19 patients, in New Delhi, India, Monday, April 19, 2021. India's health system is collapsing under the worst surge in coronavirus infections that it has seen so far. (AP PhotoManish Swarup)

—Japan’s western metropolis of Osaka has decided to ask the government to declare a state of emergency in the region after ongoing alert measures failed to control the spread of a more contagious coronavirus variant. The decision by Osaka’s governor to request a third state of emergency comes just 50 days after an earlier toothless state of emergency ended. A new state of emergency, under a law toughened in February, would allow authorities to issue binding orders for business owners to close or shorten service hours. Measures for the general public, including mask wearing and staying at home, would remain non-mandatory requests. Nationwide, Japan has recorded 537,317 cases including 9,671 deaths as of Monday — results that are good by world standards but worse than in some other Asian countries — without any enforced lockdowns. But people are becoming impatient and less cooperative in response to requests. Osaka is expected to close theme parks, shopping malls and other commercial facilities to drastically reduce public activity for a few weeks.

— Malaysian opposition lawmakers, led by former Prime Minister Mahathir Mohamad, have submitted a petition to the palace seeking an end to a coronavirus emergency so Parliament can resume. The country’s king approved Prime Minister Muhyiddin Yassin’s plan for an emergency in early January to curb the virus, but critics say it is a political ruse to help the embattled leader stay in power. The emergency entails a suspension of Parliament until Aug. 1. Mahathir says the emergency is “about a weak government wanting to stay in power.” Muhyiddin’s government has a razor-thin majority in Parliament but support for his leadership can’t be tested with parliament suspended. Malaysia’s virus cases have more than doubled to 377,000 since January.

— The Pacific nation of Fiji has closed schools and canceled sporting events as it deals with its first coronavirus cases outside of quarantine in more than a year. A soldier and a room cleaner at a quarantine facility have both tested positive, but there hasn’t been any indication so far that the virus is spreading more widely in the community. Prime Minister Frank Bainimarama said the nation was again facing a “grave and present danger.” The government ordered all gyms, bars and theaters within two containment zones closed and large gatherings canceled for at least two weeks. Home to a little under 1 million people, Fiji has recorded just two virus deaths since the pandemic began, but experts fear its health system would be ill-equipped to deal with a major outbreak.