Mookie Betts was out of the Los Angeles Dodgers lineup on Tuesday after getting hit on the right forearm a night earlier, but manager Dave Roberts doesn’t expect it to be a long-term issue.

Roberts said X-rays on Betts’ arm were negative after the former MVP took a fastball from Seattle closer Rafael Montero off the inside of his right forearm in the ninth inning of Monday’s 4-3 Mariners victory. Betts remained in the game after getting hit.

Roberts said Betts was receiving treatment and that he was hoping to avoid using him in Tuesday’s game with the Dodgers having a day off on Wednesday before opening a four-game series with division rival San Diego on Thursday at Dodger Stadium. 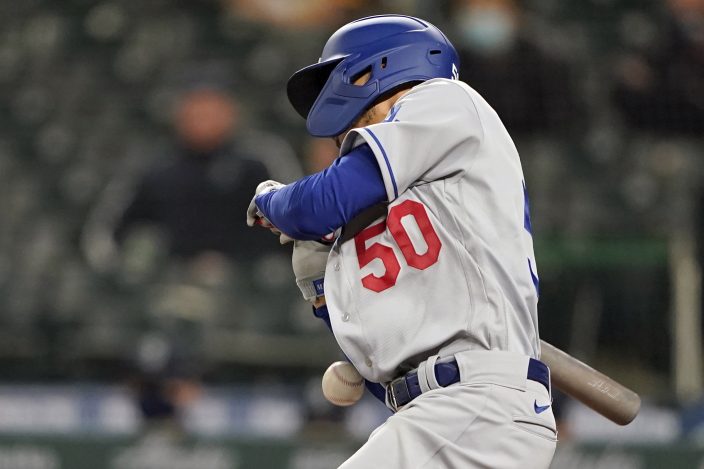 Los Angeles Dodgers' Mookie Betts gets hit by a pitch during the ninth inning of a baseball game against the Seattle Mariners, Monday, April 19, 2021, in Seattle. Betts stayed in the game and the Mariners won 4-3. (AP PhotoTed S. Warren)

“I was hoping that it would be something soft tissue, as opposed to you know the wrist or the elbow or something like that,” Roberts said. “I guess best case scenario. There was an exhale once he wanted to stay in there. So that’s part of it, the soreness, but I think that we dodged a bullet there.”

Betts is hitting .292 early in the season and already had one of the signature defensive moments of the season with his game-ending catch in the ninth inning last Saturday in a win over San Diego.

Chris Taylor started in center field for the Dodgers.

Betts: Baseball didn't do good job with response to Floyd