Rickie Fowler was eligible to play in every major dating to the 2010 British Open at St. Andrews, a streak that ended at the Masters when he fell out of the top 50 in the world. Jason Day could be next in line for major streaks being in jeopardy.

Day missed he cut at the Masters for the second time in five months. He has finished outside the top 30 in 12 of his last 16 tournaments, with six missed cuts and one withdrawal. The former world No. 1 has dropped to No. 58.

Day has a lifetime exemption to the PGA Championship, which is May 20-23 at Kiawah Island, from his 2015 victory at Whistling Straits. But the five-year exemption to the other majors from that PGA win expires this year, and he is not yet eligible for the U.S. Open. 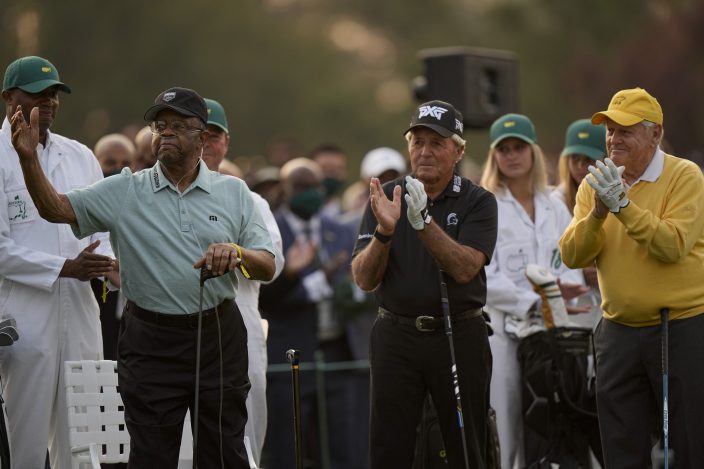 The top 60 in the world after the PGA Championship are exempt from U.S. Open qualifying. Day currently is at No. 58.

The Australian has been eligible for every major since the 2010 British Open. He did not play the Open in 2012 at Royal Lytham & St. Annes because he chose to stay home in Ohio after the birth of his first son.

Adam Scott was in a similar situation three years ago when he was outside the top 60. He made it through U.S. Open qualifying and kept alive his streak of being eligible for every major since the 2001 British Open. 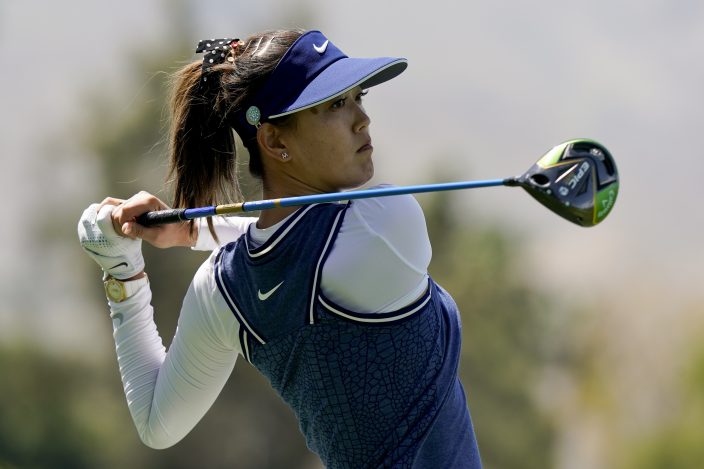 FILE - In this April 5, 2019, file photo, Michelle Wie watches her tee shot on the 18th hole during the second round of the LPGA Tour ANA Inspiration golf tournament at Mission Hills Country Club in Rancho Mirage, Calif. New mom Michelle Wie West is looking forward to being nervous again on the golf course. It's been nearly two years since Wie West last played a competitive round on the LPGA Tour, and nine months since she gave birth to daughter Makenna. (AP PhotoChris Carlson, File)

Also on the bubble for the U.S. Open is two-time Masters champion Bubba Watson. His major streak also dates to the 2010 Open at St. Andrews. Along with the cutoff for the top 60 after the PGA Championship, there will be another cutoff on June 7 after the Memorial and the Porsche European Open on the European Tour.

After that, the only way in is through qualifying, except in Europe. Because of the pandemic, the U.S. Open is swapping out a 36-hole qualifier in England with a special money list of three tournaments through the European Open.

And then there’s the case of Phil Mickelson, six times a runner-up at the only major he has never won. Mickelson had said last year before the pandemic he would not ask for a special exemption. With qualifying scrapped last year, the USGA expanded the world ranking qualification to include the top 70, and Mickelson made it to Winged Foot. The five-time major champion currently is No. 112.

Michelle Wie West has influence beyond what she does with golf clubs.

She inspired the design of a pastel-colored, tie-dyed hoodie with an LPGA logo. The garment got plenty of traction with a tweet showing Damion Lee of the Golden State Warriors wearing it. Now it has become a campaign to raise awareness about women’s sports while raising money for the LPGA Renee Powell Fund and the Clearview Legacy Foundation.

“We wanted to create this hoodie to help elevate the visibility of women’s sports,” Wie West said. “More importantly, this is an opportunity to raise money for two charities that are working to change the face of golf and increase participation and representation of girls of color.”

Wie West is married to Jonnie West, the Warriors’ director of basketball operations. The former U.S. Women’s Open champion recently returned to the LPGA Tour after giving birth to their first child.

All proceeds from the sale of the limited-edition hoodies go diversity projects run by Powell, the second Black player in LPGA history.

The LPGA Renee Powell Fund provides grants to increase participation by girls in Black communities. The Clearview Legacy Foundation was started to endow the Clearview Golf Course, which Powell’s father, Bill, built when he encountered racial discrimination upon returning home to Ohio from World War II.

“To me, it is so important to blend history with future and that is exactly what the hoodie project does,” Powell said.

Qualifying for the U.S. Women’s Open returned this year and so did the interest. The USGA said it received 1,595 entries for qualifying, which includes 60-year-old Juli Inkster, who won the last of her two Women’s Open in 2002 at Prairie Dunes.

This is the seventh consecutive year the U.S. Women’s Open has received more than 1,500 entries.

Those exempt from qualifying include 11 Women’s Open champions, and the field at Olympic Club in San Francisco on June 3-6 will include 24 of the top 25 players in the world. The exception is Ha Na Jang of South Korea, a four-time winner on the LPGA Tour. She has been staying and playing at home and was among several Koreans who did not enter.

Gary Player doesn’t know if his son has been banned from Augusta National for what amounted to ambush marketing during an otherwise historic moment with the ceremonial tee shot at the Masters. But the three-time Masters champion said it was wrong.

Wayne Player was on the first tee serving as his father’s caddie for the honorary tee shot. He appeared to position a box of golf balls near the shoulder of Lee Elder, being honored this year as the first Black player in the Masters, so the brand would be captured in photos and on television.

“I’m the first to admit that wasn’t the most intelligent thing to do,” Gary Player said in an interview with Ann Liguori of WFAN. “I said to Augusta, ‘Listen, a man’s got to take his punishment. If he does something wrong and you don’t want him back here again, then just bar him.’”

Player said he doesn’t think his son acted with malice, rather he was showing skeptical friends the golf ball he was going to hit because it wasn’t on the market.

Asked if his son had been banned, Player said he didn’t know.

“If he is, so be it. It’s not the end of the world for him,” Player said. “If they do, that’s fine. He must accept the punishment. But life goes on.”

The USGA and the National Alliance for Accessible Golf have awarded a $12,500 grant to the I Got This Foundation, started by Amy Bockerstette in 2019 to promote golf instruction and playing opportunities for people with Down syndrome and other intellectual disabilities. Bockerstette gained national attention for making par on the 16th hole with Gary Woodland during the 2019 Phoenix Open. ... Stewart Cink's victory at Hilton Head got him into the U.S. Open. The USGA exempts from qualifying players who win multiple PGA Tour events between U.S. Opens. The USGA criteria this year is to date that to when the last U.S. Open was supposed to be played (June) instead of when it was held (September). ... Ten years after he graduated from Northwestern, David Lipsky is finally headed to the PGA Tour. His 65 in the final round of the MGM Resorts Championship in Las Vegas gave him a tie for second, moving him to No. 4 on the Korn Ferry Tour points list. The top 25 earn PGA Tour cards. Lipsky has spent his career on the Asian Tour and European Tour. ... Newport Country Club in Rhode Island will host the 2024 U.S. Senior Open. One of the five founding clubs of the USGA, it hosted the first U.S. Open and U.S. Amateur in 1895. It was supposed to hold last year's Senior Open, which was canceled by the pandemic.

Stewart Cink and Brian Gay each won PGA Tour events this year after having played in at least 600 tournaments. Only seven other players have done that since 1992.

“It doesn’t mean as much to me maybe as it does to some other guys, as far as their ego. I’m not big on the driving distance stuff. I think your scoring average and winning golf tournaments is ultimately why we’re out here.” — Tony Finau.