With a collective nervous energy, millions of people paused in front of television sets or other screens Tuesday for a verdict in the case that for nearly a year has exposed the raw nerve of racial relations in America.

Three times they heard a Minnesota judge, Peter Cahill, read the jury's verdict declaring former Minneapolis police Officer Derek Chauvin guilty of murder and manslaughter for kneeling on the neck of a Black man, George Floyd, until he died last May.

Cahill's words led to a visible release of tension, both in the faces of news anchors onscreen and in crowds captured by cameras outside. 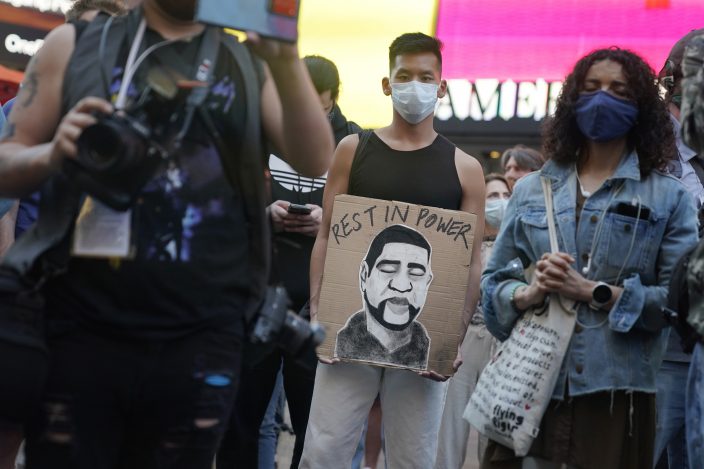 A small group of protesters gather after the verdict in the trial of former Minneapolis police Officer Derek Chauvin was announced in Times Square, New York, Tuesday, April 20, 2021. Chauvin has been convicted of murder and manslaughter in the death of George Floyd, the explosive case that triggered worldwide protests, violence and a furious reexamination of racism and policing in the U.S. (AP PhotoSeth Wenig)

“I do think this will restore some faith in the justice system that was so badly needed,” said Gayle King, CBS News anchor. 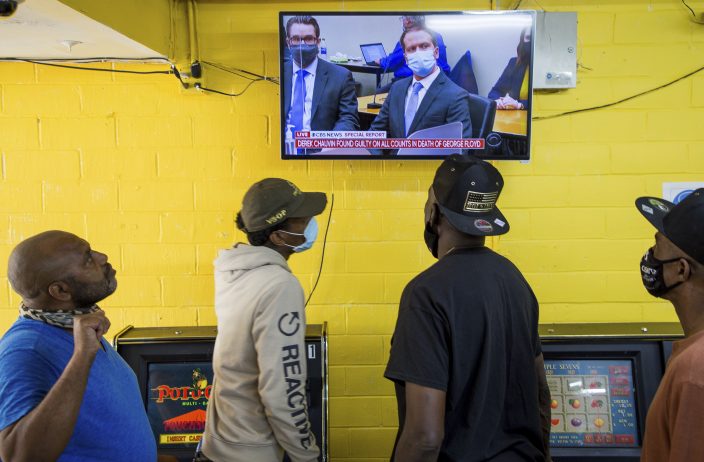 People watch a CBS news program on television as they learn the guilty verdict on all counts in the murder trial of former Minneapolis Police Officer Derek Chauvin in the death of George Floyd, Tuesday, April 20, 2021, in the Third Ward, in Houston. A jury convicted Chauvin today on murder and manslaughter charges. (Godofredo A. VásquezHouston Chronicle via AP)

Because Floyd's death had been so vividly captured in cell phone footage by bystanders, the case led to instant protests and reckonings on race last year, moments emotionally relived during Chauvin's trial.

Shortly after Cahill polled the jury, Chauvin was taken into custody.

“The whole world just got to see that: Derek Chauvin led away in handcuffs,” said MSNBC's Brian Williams. 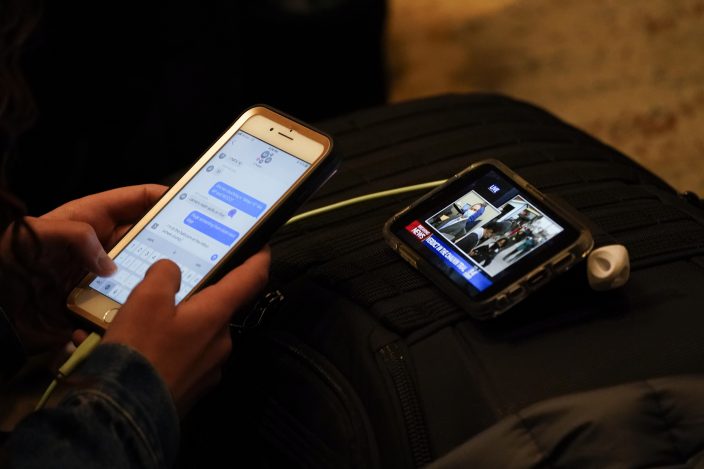 A video screen is seen as a reporters works as the jury afirms a guilty verdict at the trial of former Minneapolis police Officer Derek Chauvin for the 2020 death of George Floyd, Tuesday, April 20, 2021, in Minneapolis, Minn. (AP PhotoJulio Cortez)

On ABC News, commentator Sunny Hostin wiped away tears and spoke about her nervousness about the verdict. She said her 18-year-old son lives in South Africa, and she feels that he is safer there.

“I really believe that this is a movement that we're seeing,” she said. “For that I am so very thankful that perhaps we will see real change, much needed change in this country.”

On Fox News Channel, former prosecutor Jeanine Pirro said that “clearly the verdict was supported by the facts.” But new late-night host Greg Gutfeld drew some gasps and groans from colleagues for his reaction.

Even ESPN cut into its regular programming for verdict coverage, a rare switch away from sports. The network's “SportsCenter" show tweeted: "George Floyd's death was a catalyst for the sports world's racial justice movement.

There was about 90 minutes between when word came down at about 3:30 p.m. Eastern time that a verdict had been reached before the result was known. That was danger zone for television networks: free time to engage in speculation.

For the most part, commentators got it right, reasoning a verdict only a day after closing arguments, and without the jurors reaching out for answers to questions, was a good sign for prosecutors.

“The atmosphere in Minneapolis is extremely tense, but I can also tell you that it is very hopeful,” King said.

CNN's Van Jones said that “people will feel that their humanity has been flushed down the toilet” if Chauvin was acquitted. “Every minute now is just agony,” he said.

“We shall see what the value of a Black life is,” his colleague Lemon said.

In the end, NBC News' Gabe Gutierrez, stationed outside the courthouse, reported to anchor Lester Holt that a wave had rippled across the crowd after people repeated the verdict that had heard on their smartphones.

“If I could sum it up in one word, Lester, it is relief,” Gutierrez said.

A shooting at an upscale South Flo ...