Trey Mancini and Freddy Galvis each hit a solo homer in the third inning, and the Baltimore Orioles beat the Miami Marlins 7-5 Tuesday night.

Matt Harvey (1-1) allowed three runs in five innings for his first win since July 13, 2019, with the Angels. César Valdez retired all four batters he faced for his fourth save, and Baltimore won despite being outhit 11-9.

Orioles right fielder Anthony Santander had to be helped to the clubhouse after he sprained his left ankle in the first inning. Santander singled and was injured returning to first base on a pickoff throw.

Mancini hit his fourth homer and Galvis his second. Both came off rookie Nick Neidert (0-1), who gave up five runs in three innings.

Galvis added a run-scoring single in the eighth. Rio Ruiz hit a two-out, two-run double in the Orioles' three-run first. 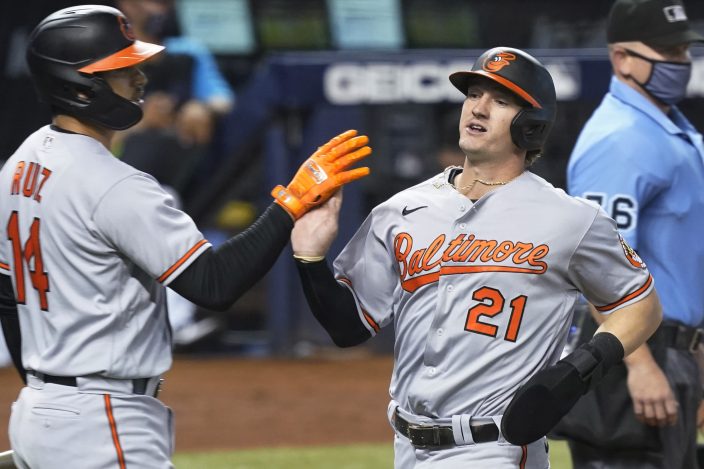 Marlins manager Don Mattingly had emptied his bench by the seventh inning, and pitcher Pablo López pinch hit in the ninth with two outs and struck out.

The Orioles came into the game with a record of 8-26 (.235) versus the Marlins, their worst winning percentage against any team. That included being swept in four games last year. 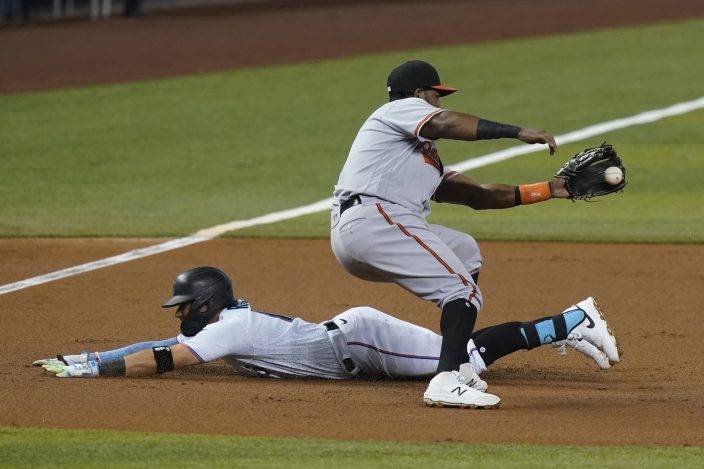 Miami Marlins' Miguel Rojas (19) slides into third base as Baltimore Orioles third baseman Maikel Franco (3) is late with the tag during the first inning of a baseball game, Tuesday, April 20, 2021, in Miami. (AP PhotoMarta Lavandier)

Austin Hays, who was activated before the game after being sidelined since April because of a right hamstring strain, replaced Santander and made a running catch at the wall to rob Brian Anderson of an RBI extra-base hit in the first.

Marlins: C Jorge Alfaro, who has battled a sore left hamstring this season, left the game in the third inning. Before the game, CF Starling Marté went on the 10-day injured list with a broken left rib, and OF Lewis Brinson was recalled from the alternate training site.

Mattingly expressed optimism Marté will recover from his injury quickly.

“I think it sounds worse than it is,” Mattingly said.

Orioles: OF Ryan McKenna was optioned to the alternate training site at Double-A Bowie.

Marlins: OF Jesus Sanchez was reinstated from the 10-day IL and optioned to the training site.

The Marlins’ Trevor Rogers (1-1, 2.40) is scheduled to start against Bruce Zimmermann (1-1, 4.24) in a matchup of left-handers Wednesday afternoon. Rogers’ 62 strikeouts are third-most by an active LHP through his first 10 big league starts, behind Chris Sale (68) and Oliver Perez (67), according to the Elias Sports Bureau.