Quinn Hughes had a goal and two assists for Vancouver, Nils Hoglander also scored and J.T. Miller had two assists. Braden Holtby stopped 37 shots in the Canucks return from a massive COVID-19 outbreak.

John Tavares had two goals for the Maple Leafs, who lost their fifth straight but remain atop the North Division. Adam Brooks also scored for Toronto and William Nylander had two assists. David Rittich finished with 23 saves. 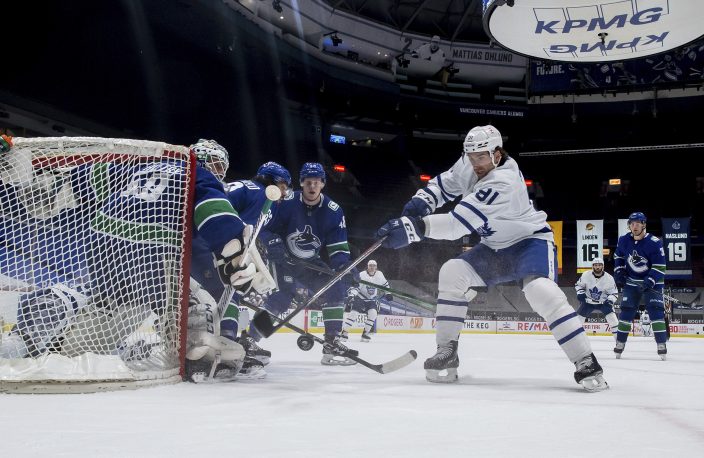 It was the Canucks’ second straight win over the Maple Leafs, giving Vancouver a 4-3 edge in the season series with two games left to play.

Trailing 5-3, Toronto had an excellent opportunity to get within one with less than two minutes to go when Vancouver defenseman Tyler Myers was called for slashing. The Maple Leafs pulled Rittich for an extra attacker but couldn’t capitalize.

Instead, Sutter buried the empty-netter strike with 36 seconds left on the clock.

The Leafs briefly took a 3-2 lead with a short-handed goal 3:10 into the third. Holtby came well out of his net to stop a shot but couldn’t freeze the puck. Mitch Marner collected the rebound and passed it to Brooks in the slot. Boeser tried his best to fill in for the Canucks goalie but Brooks’ shot sailed over his leg and in.

Hoglander tied the score 3-3 at 6:43 of the third, streaking into the Maple Leafs’ zone and rifling a shot past Rittich from the top of the right face-off circle. It was the Swedish rookie’s ninth goal of the season.

Pearson had a power-play goal 3:05 later to put Vancouver ahead for good. Rittich made a big pad stop on Miller and Pearson, stationed at the top of the crease, batted in the rebound to put Vancouver up 4-3. 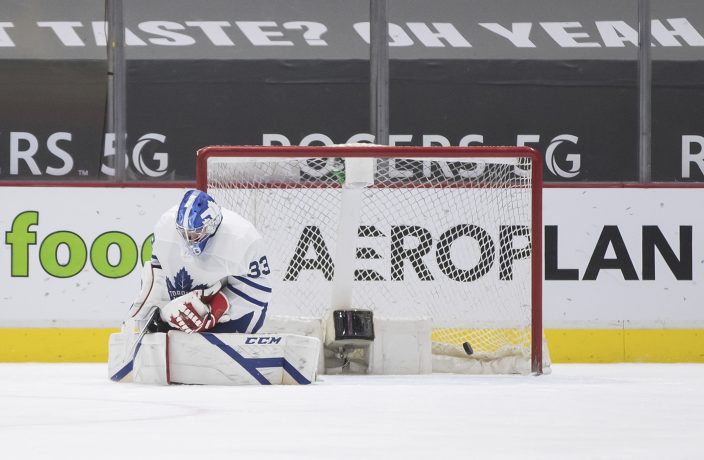 A sloppy play in the neutral zone cost Toronto late in the game. Pearson capitalized on a turnover on the red line and bolted into Toronto’s end alone, firing a wrist shot past Rittich for the 28-year-old left wing's second goal of the night with about 6 1/2 minutes left to play.

Toronto ended the first period up 1-0 after Myers blew a tire near the blue line and Nylander darted past him on a breakaway. Holtby stopped the ensuing blast but Nylander collected his own rebound, swung around the back of the net and delivered it to Tavares for the tap in.

Sutter got Vancouver on the board at 5:33 of the second. Travis Hamonic’s shot from the blue line hit the outside of the net and bounced back toward the crease where Sutter quickly pounced and tipped it in for his seventh goal of the season. 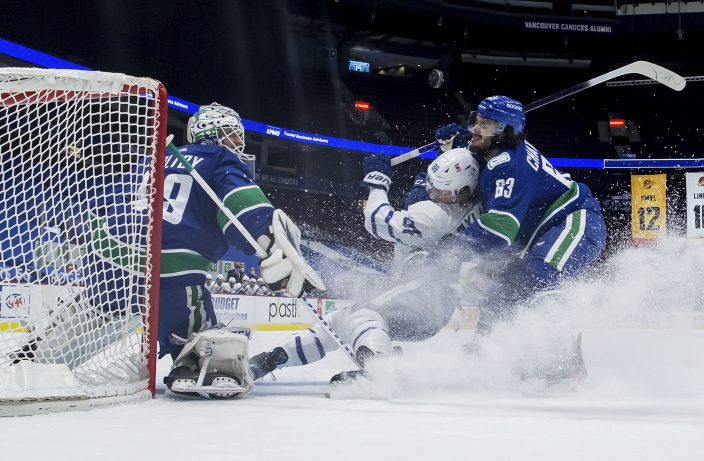 Toronto Maple Leafs' William Nylander (88) is hauled down by Vancouver Canucks' Jalen Chatfield (63) as goalie Braden Holtby (49) makes the save during the second period of an NHL hockey game in Vancouver, British Columbia, on Tuesday, April 20, 2021. (Darryl DyckThe Canadian Press via AP)

The Canucks went up 2-1, 10:08 into the middle period when Hughes unleashed a blast from the top of the left faceoff circle. The puck ticked of Marner’s blade and sailed up over Rittich’s glove.

Toronto knotted the score with a power-play goal with 2:46 left in the second after Vancouver defenseman Jalen Chatfield was called for holding. Tavares used a screen by Nylander to whip a shot into the top left corner of the net for his second goal of the night and 16th of the season.

Tavares is on a six-game point streak with four goals and six assists across the stretch.

There was a tense moment midway through the second period when Zach Bogosian flew into the end boards. The Maple Leafs defenseman appeared to catch his skate in a rut while chasing down a puck and fell awkwardly, a thud echoing through the empty rink. He lay on the ice for a few moments before going directly to the dressing room and did not return to the game.

BACK IN THE LINEUP

Maple Leafs: At Winnipeg for the first of a two-game set Thursday.

Canucks: Host Ottawa on Thursday for the first of two home games against the Senators.