Kurt Suzuki also went deep for the Angels, who have won six of their nine home games.

Ohtani took the mound for the first time since April 4 after dealing with a blister issue on the middle finger of his throwing hand. The right-hander allowed only one hit but was the first starting pitcher since at least 1901 to toss four shutout innings with at least six walks and seven strikeouts. 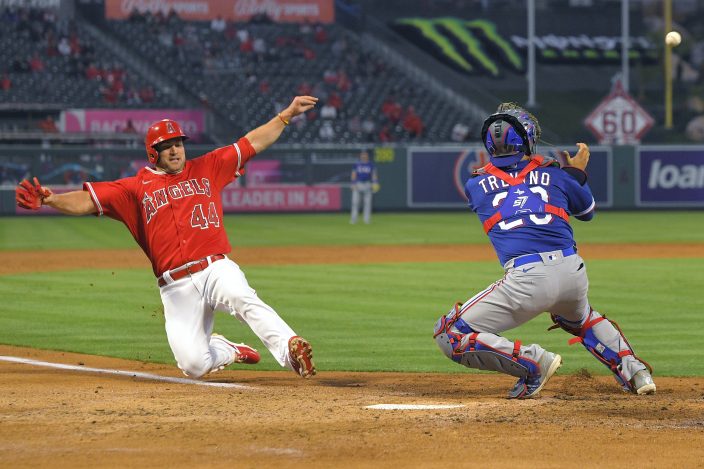 According to Sportradar, he joins Colorado's Tyler Chatwood (2017) and Bill Bailey of the 1914 Baltimore Terrapins to go five innings or fewer and allow no runs on one hit with at least six walks and seven strikeouts.

Ohtani — who was on a pitch limit — threw 80 in all and was never able to retire the Rangers in order. But he was effective when needed.

After getting Isiah Kiner-Falefa to ground out to start the game, Ohtani walked the next three Texas hitters to load the bases. However, he got out of the inning by striking out Nick Solak and Willie Calhoun. 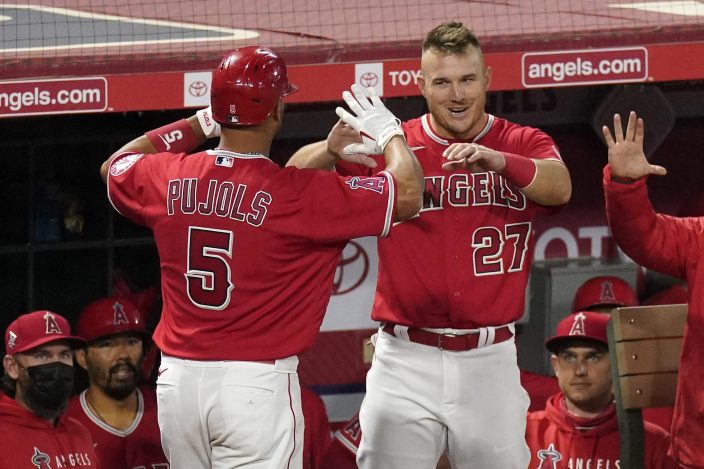 Adolis García walked with one out in the second but was caught stealing at second. Ohtani walked García again with two outs in the fourth and then hit Brock Holt with a pitch before he struck out Kiner-Falefa for his final out of the night. Ohtani's 37 strikes included 13 swings and misses.

Solak homered for the Rangers, who were held to five hits and left nine runners on base. Jordan Lyles (0-2) went six innings, allowing three runs and five hits.

Trout, whose 32-game on-base streak was snapped Monday, had three hits. He led off the fourth with a double to left-center after miscommunication by the Rangers' outfielders, and gave the Angels a 2-0 lead when he scored on a wild pitch by Lyles. 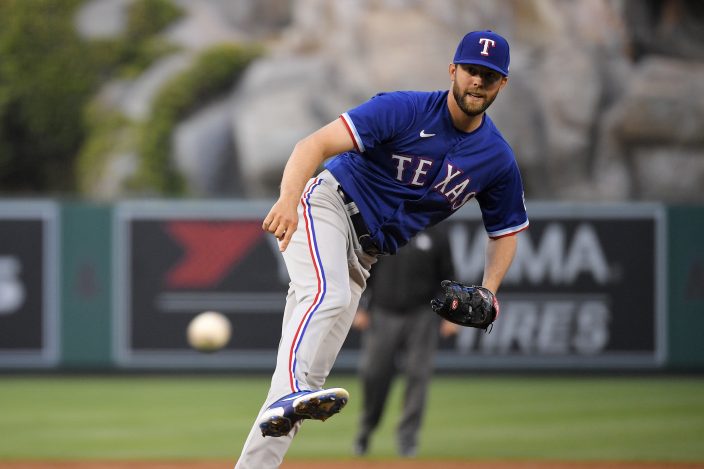 After Solak's solo shot to left-center off Griffin Canning (1-1) brought the Rangers within a run in the sixth, Trout took Lyles' full-count fastball over the left-field wall in the home half.

Texas closed to 3-2 when Kiner-Falefa led off the seventh with a triple and scored on a one-out single by Joey Gallo. But the Angels put it away with a three-run seventh on Pujols' drive to center and Suzuki's two-run homer down the left-field line.

Scott Schebler made the most of his first start with the Angels. Schebler was in right field and led off the third with a double. He advanced to third on Suzuki's fly to right and then gave Los Angeles a 1-0 lead when he beat the throw home by Gallo to score on David Fletcher's sacrifice fly.

Rangers: 1B Ronald Guzman is expected to see a specialist before the end of the week concerning the torn meniscus in his right knee. Guzman was injured April 12 against Tampa Bay.

Angels: 3B Anthony Rendon (groin) did some hitting and fielding drills. He is eligible to come off the injured list Wednesday but is unlikely to be activated until later in the week.

Texas right-hander Mike Foltynewicz and Los Angeles lefty José Quintana are both looking for their first win. Foltynewicz (0-3, 5.63 ERA) has allowed five home runs in three starts while Quintana (0-1, 16.20) is looking to bounce back after allowing seven runs (five earned) in 1 2/3 innings in his last start on April 10 against Toronto.