GEORGE FLOYD-OFFICER TRIAL — After three weeks of testimony, the trial of the former police officer charged with killing George Floyd ended swiftly: barely more than a day of jury deliberations, then just minutes for the verdicts to be read — guilty, guilty and guilty — and Derek Chauvin was handcuffed and taken away to prison. Chauvin, 45, could be sent to prison for decades when he is sentenced in about two months a case that triggered worldwide protests, violence and a furious reexamination of racism and policing in the U.S. By Amy Forliti, Steve Karnowski and Tammy Webber. SENT: 1,300 words, photos, videos. 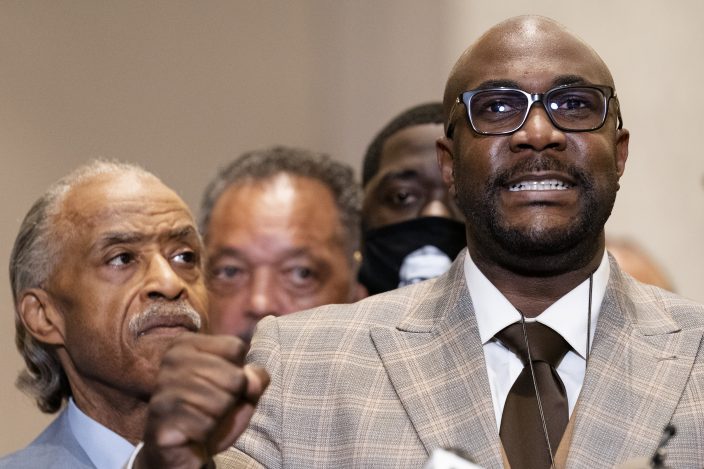 GEORGE-FLOYD-AMERICA-REFLECTS — When the verdicts came in — Guilty, Guilty, Guilty — Lucia Edmonds let out the breath she hadn’t even realized she’d been holding. The relief that the 91-year-old Black woman felt flooding over her when white former Minneapolis police officer Derek Chauvin was convicted for killing George Floyd was hard-earned, coming after a lifetime of seeing other cases end differently. By Deepti Hajela and Jocelyn Noveck. SENT: 1,000 words, photos. With GEORGE FLOYD-OFFICER TRIAL-REACTION-PHOTO GALLERY Joy, tears, calls for change after Floyd verdict.

GEORGE FLOYD-BLACK AMERICA MOOD — Relief, even if fleeting and momentary, is a feeling that Black Americans have rarely known in America: From slavery to Jim Crow segregation to enduring punishments for living while Black, a breath of fresh air untainted by oppression has long been hard to come by. Nonetheless, the conviction of ex-cop Derek Chauvin for murdering George Floyd nearly a year ago allowed many across the nation to exhale pent-up anxiety — and to inhale a sense of hope. By Aaron Morrison and Kat Stafford. SENT: 840 words, photos.

GEORGE FLOYD-OFFICER TRIAL-BIDEN ADMINISTRATION — President Joe Biden says the conviction of former Minneapolis Police Officer Derek Chauvin in the killing of George Floyd “can be a giant step forward” for the nation in the fight against systemic racism. But he declares that “it’s not enough.” By Jonathan Lemire, Zeke Miller and Michael Balsamo. SENT: 1,000 words, photos, video. Also see MORE ON CHAUVIN TRIAL below. 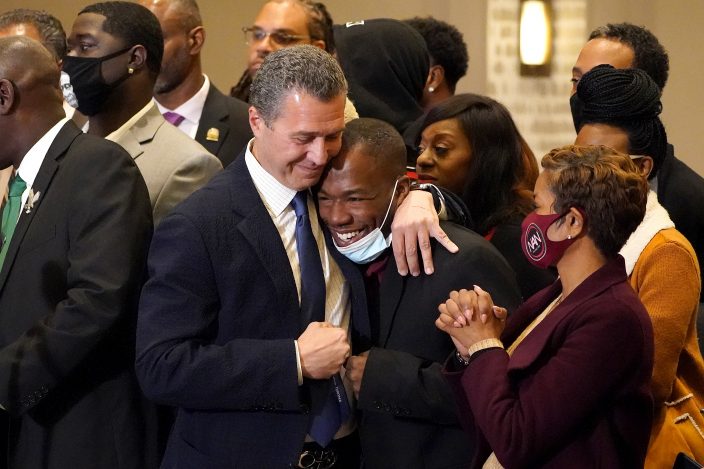 Click here for more stories on the Chauvin trial.

VIRUS OUTBREAK-BIDEN — The U.S. is meeting Biden’s latest vaccine goal of administering 200 million COVID-19 shots in his first 100 days in office, as the White House steps up its efforts to inoculate the rest of the public. With more than 50% of adults at least partially vaccinated, Biden will reflect on his efforts to expand vaccine distribution and access. By Zeke Miller. SENT: 480 words, photo. UPCOMING: 700 words after 1:15 p.m. remarks.

COLUMBUS-POLICE-SHOOTING — Columbus police shot and killed a teenage girl who swung at two other people with a knife, according to bodycam footage from the officer who fired the shots just minutes before the verdict in George Floyd’s killing was read. By Farnoush Amiri and Ryan Kryska. SENT: 800 words, photos. 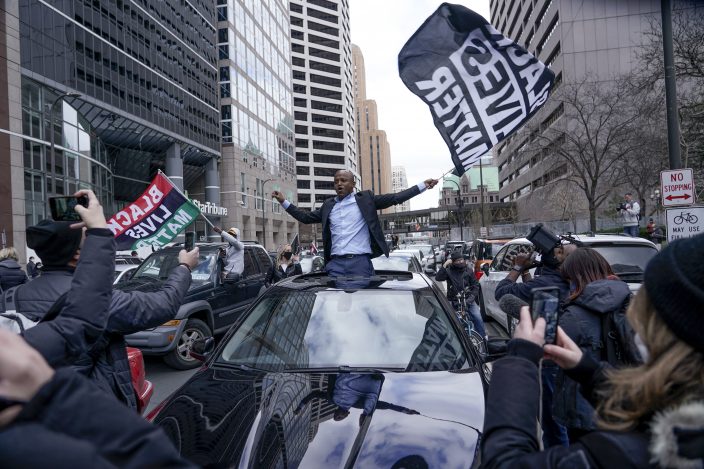 People rally outside the courthouse in Minneapolis on Tuesday, April 20, 2021, after the guilty verdicts were announced in the trial of former Minneapolis police officer Derek Chauvin in the death of George Floyd. (AP PhotoMorry Gash) 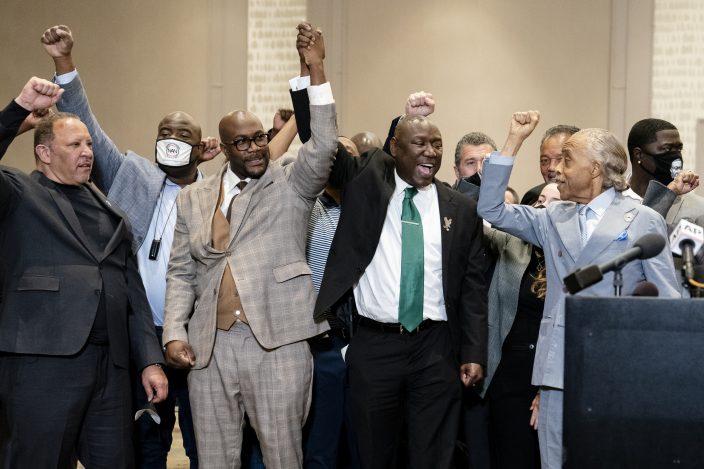 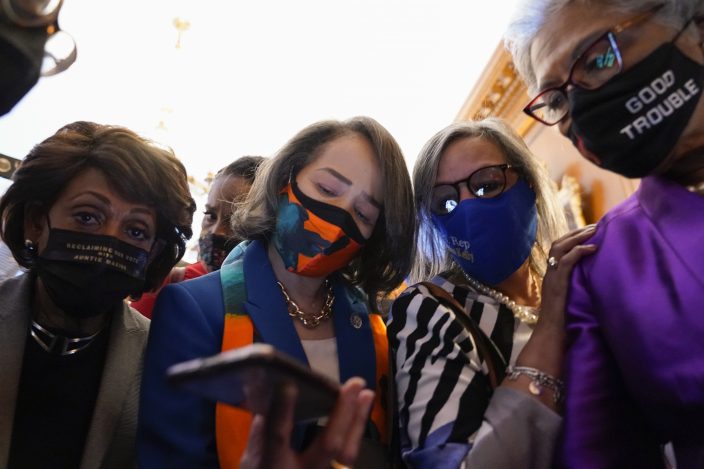 Members of the Congressional Black Caucus listen on Capitol Hill in Washington on Tuesday, April 20, 2021, as the verdict is announced in the murder trial of former Minneapolis police Officer Derek Chauvin in the death of George Floyd. (AP PhotoJ. Scott Applewhite)

GEORGE FLOYD-TEXAS HOMETOWN — The streets of Houston’s Third Ward, a historically black neighborhood where George Floyd grew up, echoed with screams filled with the word “justice” in the moments after former Minneapolis police Officer Derek Chauvin was convicted of murder. SENT: 610 words, photos. With GEORGE-FLOYD-OFFICER-TRIAL-LOS-ANGELES — Flashpoint of 1992 L.A. riots becomes a place of celebration.

BIDEN-CLIMATE — Biden will pledge to cut U.S. greenhouse gas emissions at least in half by 2030 as he convenes as a virtual climate summit with 40 world leaders. SENT: 840 words, photos. Also see EUROPE-CLIMATE below.

JUSTICE DEPARTMENT-POLICE SHOOTINGS — Calls have grown for federal investigations into recent police killings across the nation since Biden took office, but the U.S. Justice Department is still bound by the same laws that present a high bar for bringing federal charges. SENT: 990 words, photos.

FEDEX-SHOOTING-INDIANAPOLIS-SIKH-COMMUNITY — Ajeet Singh had to steel himself for a return to work at a FedEx warehouse in Indianapolis for the first time since a former employee shot dead eight people, including four members of Indianapolis’ tightly knit Sikh community. SENT: 1,180 words, photos.

SKOREA-JAPAN-SEXUAL-SLAVERY — A South Korean court rejected a claim by South Korean sexual slavery victims and their relatives who sought compensation from the Japanese government over their wartime sufferings. SENT: 940 words, photos.

IRAN-SAUDI-TALKS — A first round of direct talks between regional rivals Saudi Arabia and Iran signaled a possible de-escalation following years of animosity that often spilled into neighboring countries and at least one still-raging war, but few expect quick results. SENT: 880 words, photos.

EUROPE-CLIMATE — The European Union reached a tentative climate deal that should make the 27-nation bloc climate-neutral by 2050, with member states and parliament agreeing on the targets on the eve of a virtual summit that Biden will host. SENT: 360 words, photo. With CHINA-US-CLIMATE SUMMIT — China’s Xi to participate in Biden’s climate summit; AUSTRALIA-CLIMATE — Australia plans to spend $417 million on hydrogen, carbon capture.

PRINCE-ANNIVERSARY — Paisley Park, where Prince lived and worked, will welcome back a select 1,400 fans to mark the fifth anniversary of his death from inside his creative sanctuary. SENT: 410 words, photos.

SUPER-LEAGUE-ENGLAND — The Super League collapsed before a ball was kicked in the European breakaway competition after being abandoned by the six English clubs, leaving the Spanish and Italian participants stranded. By Global Soccer Writer Rob Harris. SENT: 1,080 words, photos.