Rescuers in the southern Philippines found the bodies of four crew members Wednesday and rescued seven others who jumped off a cargo vessel, which took in water and listed after its anchor broke in rough seas, officials said.

Nine other crew members of the LCT Cebu Great Ocean remain missing. The coast guard and maritime police were searching for them off Surigao del Norte province, where the vessel ran aground without its crew, coast guard spokesman Commodore Armand Balilo said.

Those who were rescued floated in their life jackets and float rings for two days, Balilo said. 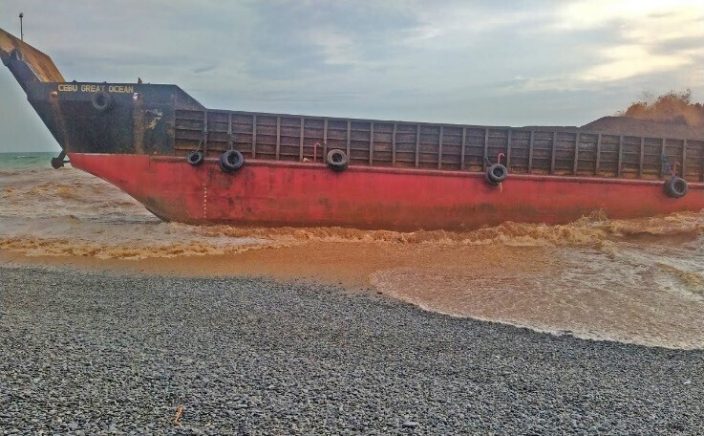 This photo provided by the Philippine Coast Guard shows the cargo vessel LCT Cebu Great Ocean aground along the shoreline of Barangay Cantapoy, Malimono, Surigao del Norte, southern Philippines on Monday April 19, 2021. Rescuers in the southern Philippines found the bodies of four crew members Wednesday and rescued several others who jumped off a cargo vessel, which took in water and listed after its anchor broke in rough seas, officials said. (Philippine Coast Guard via AP)

The vessel, which had a crew of 20 and was loaded with nickel ore and about 2,000 liters (530 gallons) of diesel fuel, had dropped anchor off Jabonga town in nearby Agusan del Norte. But it snapped in rough seas on Monday and the vessel took in water and started to list.

“It was during this time when they declared `abandon ship’ and jumped off,” a coast guard report said.

The abandoned vessel drifted and ran aground more than 60 kilometers (37 miles) from where it was anchored.

The coast guard asked passing ships to be on the lookout for the missing crew.

A strong typhoon has left at least three people dead, displaced more than 169,000 in eastern provinces and roughed up weather elsewhere in the archipelago in recent days although it did not reach inland.