Russian President Vladimir Putin delivered his annual address to the nation Wednesday amid a sweeping Kremlin crackdown on opposition protests and soaring tensions with the West.

Putin began his state-of-the-nation speech by hailing the nation's response to the coronavirus pandemic. He said the quick development of three coronavirus vaccines underlined Russia's technological and industrial potential.

The Russian leader has urged authorities to quicken the pace of the country's vaccination program, which has been slow compared to the West. 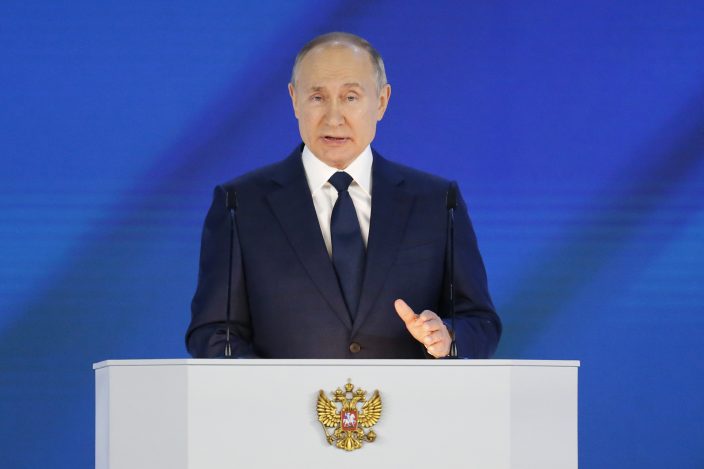 Russian President Vladimir Putin gives his annual state of the nation address in Manezh, Moscow, Russia, Wednesday, April 21, 2021. Putin's state-of-the-nation speech comes amid a new surge in tensions with the West over a Russian troop buildup near the border with Ukraine and a hunger strike by jailed Russian opposition leader Alexei Navalny protesting a lack of adequate medical treatment in prison. (AP PhotoAlexander Zemlianichenko, Pool)

He promised new measures to encourage births and to increase average life expectancy, acknowledged that the pandemic has exacerbated demographic trends in Russia.

Putin proposed new incentives to help the economy overcome the blow from the pandemic and new social payments to the population.

Allies of imprisoned opposition leader Alexei Navalny called for nationwide protests across Russia on Wednesday to support him. Navalny started a prison hunger strike three weeks ago to protest what he says is inadequate medical treatment for his back pains and officials' refusal to allow a visit by his doctor. His deteriorating condition has caused international outrage.

Navalny's imprisonment and his health condition have fueled tensions with the West, already strained over Moscow's interference with elections, hacking attacks and, most recently, a massive Russian military buildup near the border with Ukraine.

The Kremlin has rejected Western concerns about the troop concentration, saying it's free to deploy the military wherever it's deemed necessary on the Russian territory.

Rafael Nadal got through another y ...

An online post helps both the hungry and a chef in Rama ...