Japan’s government is preparing to announce a third state of emergency in Tokyo and the western metropolitan area around Osaka following requests from local leaders who say current measures are failing to curb a rapid rise in coronavirus infections.

Prime Minister Yoshihide Suga and key ministers met late Wednesday to discuss details before deciding on a state of emergency for Tokyo, Osaka and neighboring Kyoto and Hyogo expected later this week.

Osaka, the worst-hit area in the latest upsurge beginning in March, reported 1,242 new cases Wednesday, a new high for the prefecture and exceeding Tokyo’s 843. 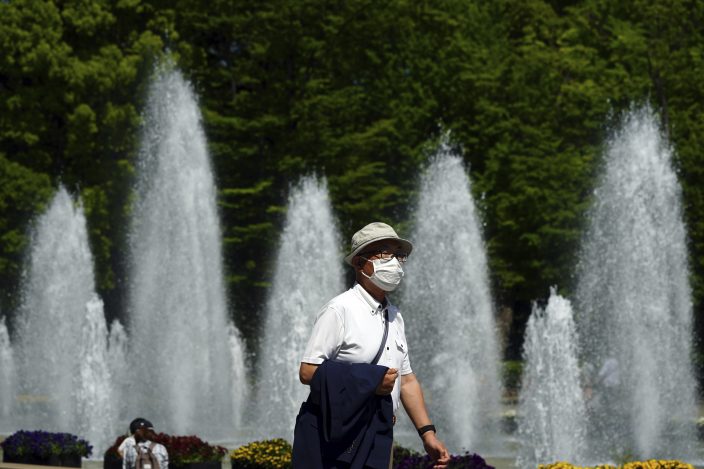 A man wearing a protective mask to help curb the spread of the coronavirus walks through a park Wednesday, April 21, 2021, in Tokyo. The Japanese capital confirmed more than 840 new coronavirus cases on Wednesday. (AP PhotoEugene Hoshiko)

Osaka Gov. Hirofumi Yoshimura on Tuesday said the current focus on shorter hours at bars and restaurants is not effective and requested a state of emergency that would allow him to issue tougher measures, including business shutdown orders.

Kyoto and Hyogo requested a renewed emergency Wednesday, and Tokyo is expected to follow suit. 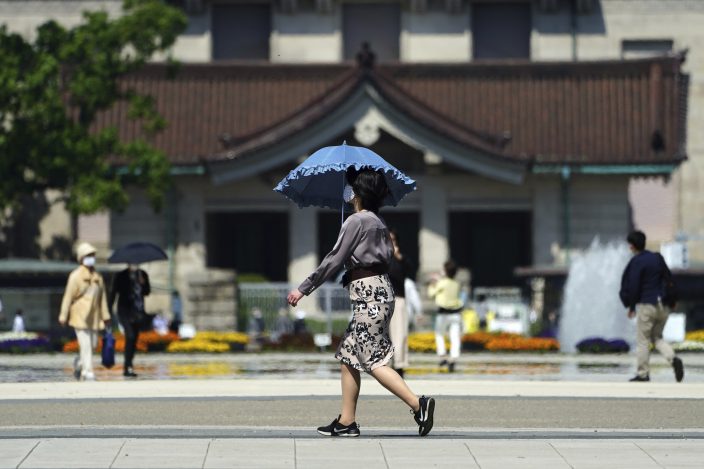 A woman wearing a protective mask to help curb the spread of the coronavirus walks at a park Wednesday, April 21, 2021, in Tokyo. The Japanese capital confirmed more than 840 new coronavirus cases on Wednesday. (AP PhotoEugene Hoshiko)

The current alert measures started on April 5 in Osaka and have since been expanded to 10 areas including Tokyo through early May. The requests for a state of emergency underscore the failures of steps that Suga’s government has promoted as an alternative to an emergency with less economic damage.

Suga told reporters that he will decide by the end of the week.

Medical experts urged Suga, who has already faced criticism for being slow to act on earlier waves of infections, to quickly switch to a state of emergency. 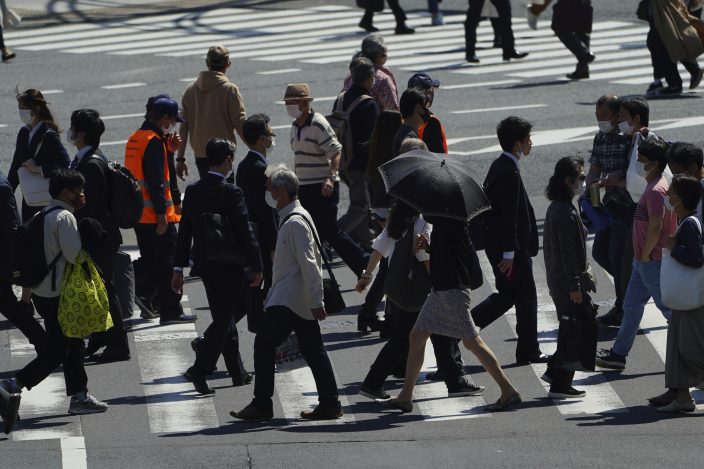 “Time is limited," Dr. Shigeru Omi, head of a government taskforce, told a parliamentary session. “Obviously, people are not responding to the ongoing measures."

The current alert measures allow prefectural leaders to issue binding orders to bars and restaurants in specific areas to operate shorter hours in exchange for compensation, with penalties for violators.

A new state of emergency, under a law toughened in February, would allow authorities to order shutdowns of businesses and take other steps. Measures for the general public, including mask wearing and staying at home, would remain non-mandatory requests.

Nationwide, Japan has recorded 541,496 cases including 9,710 deaths as of Tuesday — results that are good by world standards but worse than in some other Asian countries — without any enforced lockdowns. But people are becoming impatient and less cooperative to virus measures.

Japan’s inoculation campaign lags behind many countries, with imported vaccines in short supply while its attempts to develop its own vaccines are still in the early stages.

On Wednesday, local media reported that Japan will sign an agreement with Pfizer Inc. to supply 50 million doses of vaccine to Japan by September, in addition to the 144 million doses they have already contracted. That, along with an existing contract for 50 million doses from Moderna Inc., would be enough to cover Japan's adult population amid uncertainty over the AstraZeneca vaccine's rare blood clotting issue.

Japan entry controls to stay until more known about omicron