Chris Paul scored 28 points, Devin Booker had 19 and Mikal Bridges 18 to lead the Phoenix Suns to a 116-113 victory over the Philadelphia 76ers on Wednesday night.

Joel Embiid, who had 38 points and 17 rebounds, heaved a full-court shot at the horn that rattled around the rim and put the All-Star center on his back in disbelief over the near-make.

No matter, the Suns walked off winners on the road for the second time this week against one of the top teams in the East. They are an NBA-best 19-7 on the road and second overall behind Utah at 42-16. 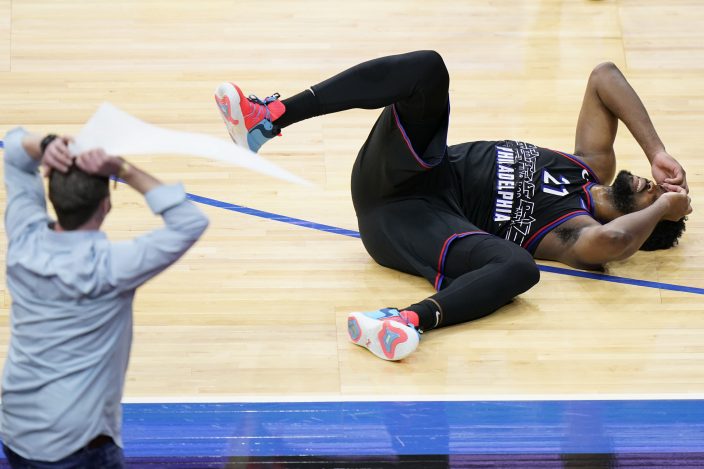 Philadelphia 76ers' Joel Embiid, right, reacts after missing a shot in the final second of an NBA basketball game against the Phoenix Suns, Wednesday, April 21, 2021, in Philadelphia. (AP PhotoMatt Slocum)

Paul hit five 3s and Bridges, a former Villanova standout, continued to haunt the Sixers three years after an ill-fated draft-night deal. The Sixers selected Bridges with the 10th overall pick in 2018 — a feel-good story because of the Nova connection and his mother worked for the 76ers’ parent company. Zhaire played only 13 NBA games and is out of the league while Bridges turned into a breakout star for the blossoming Suns.

The Suns were coming off an overtime win in Milwaukee to open their five-game trip. 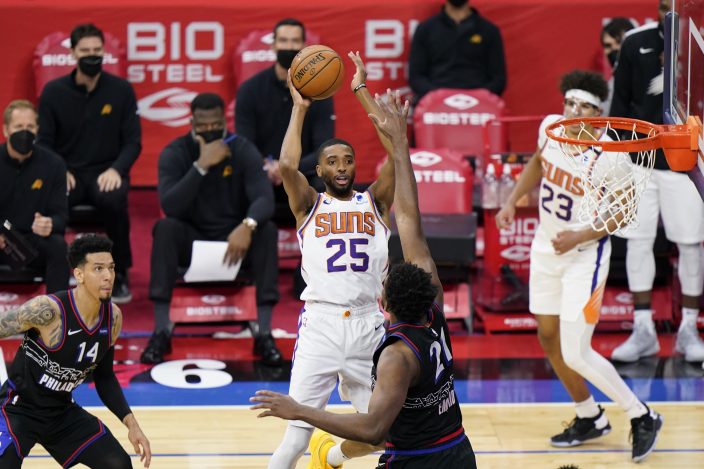 Phoenix Suns' Mikal Bridges, left, goes up for a shot against Philadelphia 76ers' Joel Embiid during the second half of an NBA basketball game, Wednesday, April 21, 2021, in Philadelphia. (AP PhotoMatt Slocum)

Stephen Curry had his first rough night for Golden State in a month, and Bradley Beal rallied Washington in the fourth quarter for its season-best sixth straight victory.

Coming off a historic 11-game stretch in which he made 78 3-pointers and surpassed Beal as the NBA’s scoring leader, Curry scored 18 points on 7-of-25 shooting, including 2 of 14 on 3s.

Beal scored 29 points in he Wizards' first home game with fans in more than a year.

Kyrie Irving had 28 points, 11 rebounds and eight assists for the Nets, and Bruce Brown added 21 points and 14 rebounds.

Darius Bazley matched his career high with 26 points for Oklahoma City. The Thunder have lost 12 in a row.

Cleveland coach J.B. Bickerstaff was not at the game for personal reasons, but is expected to return to the bench Friday. Assistant coach Greg Buckner filled in for his longtime friend and colleague.

Kevin Love added 15 points and nine rebounds for Cleveland. Lauri Markkanen scored 14 of his 16 points in the second half for Chicago.

Celtics have 31-3 run in comeback victory over Nuggets