Kirill Kripizov scored a dazzling goal to break Minnesota’s rookie record, Cam Talbot stopped 39 shots and the Wild stretched their winning streak to five games with a 4-1 victory over the Arizona Coyotes on Wednesday night.

The Wild withstood a big initial flurry by Arizona and an early goal by Christian Dvorak in a tight-checking game. Kevin Fiala and Marcus Foligno each scored to put the Wild up, then Kiprizov deked goalie Darcy Kuemper out of the crease and scored on a wraparound. 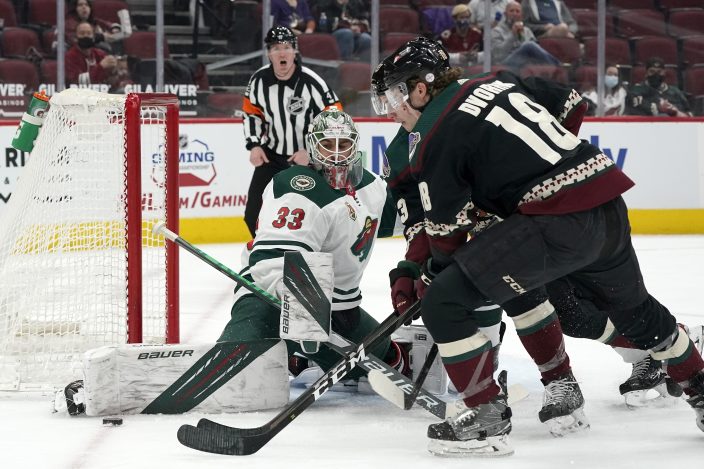 Arizona Coyotes center Christian Dvorak (18) beats Coyotes center Lane Pederson, back right, to the puck just prior to sliding it past Minnesota Wild goaltender Cam Talbot (33) for a goal as referee Corey Syvret, back left, looks on during the first period of an NHL hockey game Wednesday, April 21, 2021, in Glendale, Ariz. (AP PhotoRoss D. Franklin)

Talbot made some big saves down the stretch, and Nico Sturm added an empty-net goal to give Minnesota a 16-point cushion over the Coyotes for third in the West Division.

The Coyotes dominated early, but couldn’t get anything else past Talbot in losing for the seventh time in eight games.

Hagel also had two assists to help Chicago beat Nashville for the first time in seven games this season. Pius Suter and Vinnie Hinostroza each had a goal and an assist, Wyatt Kalynuk and Dominik Kubalik added goals, and Malcolm Subban made 35 saves. The Blackhawks trailed 4-1 after Luke Kunin scored 58 seconds into the third.

Mikael Granlund had a goal and an assist for the Predators, Eeli Tolvanen and Colton Sissons also scored, and Juuse Saros made 25 saves.

The teams will meet again in Chicago on Friday night.