Just days after guilty verdicts were handed down for the former Minneapolis police officer whose killing of George Floyd set off nationwide protests and a reckoning over racism, the family of another Black man killed by police, this time in a nearby suburb, is preparing for his Thursday funeral.

Hundreds of people turned out Wednesday at a Minneapolis church for the public viewing for 20-year-old Daunte Wright, a father of one shot by a police officer on April 11 during a traffic stop in the small city of Brooklyn Center.

Friends and family members wept as they stood before Wright's open casket, which was blanketed with red roses. All who viewed the open casket on Wednesday saw the young man dressed in a jean jacket bedazzled with several red and green gem-like buttons on both sides of the lapels. 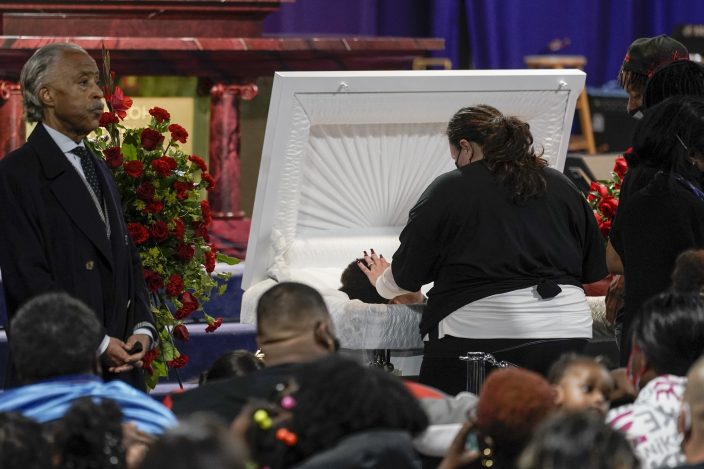 Katie Wright, mother of Daunte Wright, places her hand on her son during visitation, Wednesday, April 21, 2021, in Minneapolis. Daunte Wright was fatally shot by a police officer during a traffic stop. (AP PhotoMorry Gash)

An obituary handed out at the memorial recalled Wright's love of Fourth of July fireworks, the “lemon head” nickname bestowed by an aunt and the months he spent in a hospital intensive care unit when his son was born prematurely.

The city's police chief said it appeared from body camera video that the officer who shot Wright used her pistol when she meant to use her Taser. The white officer, 26-year veteran Kim Potter, is charged with second-degree manslaughter. Both she and the chief resigned soon after the shooting.

Wright's killing came amid increasing tension during the weekslong trial of Derek Chauvin, the white former police officer who killed Floyd last May. By the day of the verdict, more than 3,000 National Guard soldiers had flooded the area, along with police, state troopers and other law enforcement officers. Concrete barriers, chain-link fences and barbed wire ringed the courthouse where Chauvin was tried, and it became commonplace to pass convoys of desert-tan military vehicles. 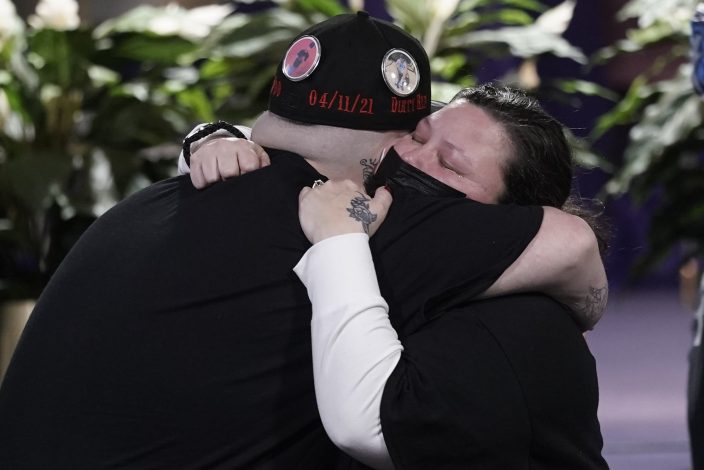 But Minneapolis residents who peacefully celebrated Tuesday's guilty verdicts had barely one full day before attention turned to burying Wright.

The Rev. Al Sharpton, the civil rights leader who eulogized Floyd at his Minneapolis funeral last year, will also deliver the eulogy at Wright’s funeral. In an interview with The Associated Press on Wednesday, Sharpton said he would first pay tribute to Wright, “a young man just at the beginning of life, full of life."

“We lose George Floyd over an allegedly forged $20 bill and Daunte Wright over some expired (vehicle) tags — aren't our lives worth more than that?" Sharpton said. 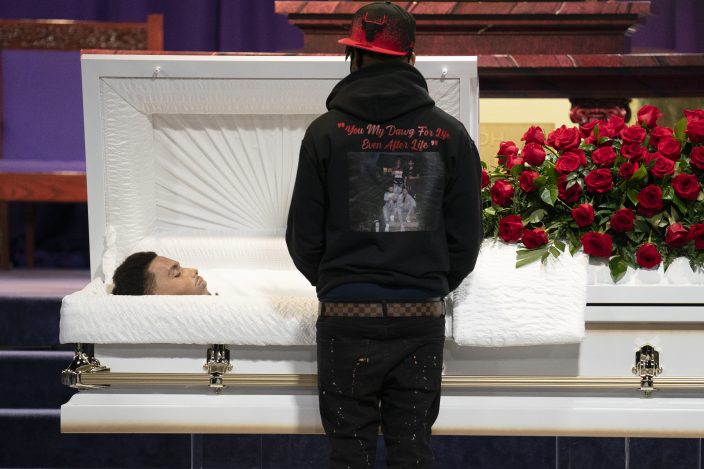 He said he will also use his remarks to remind those in attendance, or watching from afar, that the fight for justice didn't end with the Chauvin verdict.

“We should not think that, because we won one battle with Chauvin, the war is over,” Sharpton said, “or that if we do not get justice for this case, that we will undo what we were able to do with George Floyd. This is round two, and we must win this round."

Members of Wright’s family and civil rights attorney Ben Crump, who represents Floyd’s family, are also expected to speak at the service. Some of Floyd’s relatives are expected to attend.

Wright’s killing set off protests in Brooklyn Center, a working-class, majority nonwhite city, with hundreds of people gathering every night for a week outside the city's heavily guarded police station. While the mayor called for law enforcement and protesters to scale back their tactics, the nights often ended with demonstrators lobbing water bottles and rocks at the officers, and law enforcement responding with pepper spray, tear gas and rubber bullets.

The shooting occurred when a scuffle broke out as police tried to arrest Wright, after realizing he had an outstanding warrant for failing to appear in court on charges of fleeing police and having a gun without a permit.

On Wednesday afternoon, several Minneapolis area activists paid their respects to the 20-year-old’s family at the public memorial. Representatives of Families Supporting Families Against Police Violence and the Minnesota chapter of the Council on American-Islamic Relations were among the activists.

“Our heart goes out to the family of Daunte Wright,” Nekima Levy Armstrong, a civil right lawyer and former president of the Minneapolis NAACP, said as she was leaving the memorial. “They shouldn’t have to go through this. Because of what happened to their son, we’re committed to staying out on the front lines and demanding justice and accountability for (his) life.”

Associated Press writer Tim Sullivan contributed. Morrison is a member of the AP’s Race and Ethnicity team. Follow him on Twitter: https://www.twitter.com/aaronlmorrison.