A large number of hospitals across the country complained of acute shortage of beds, medicines and are running on dangerously low levels of oxygen. 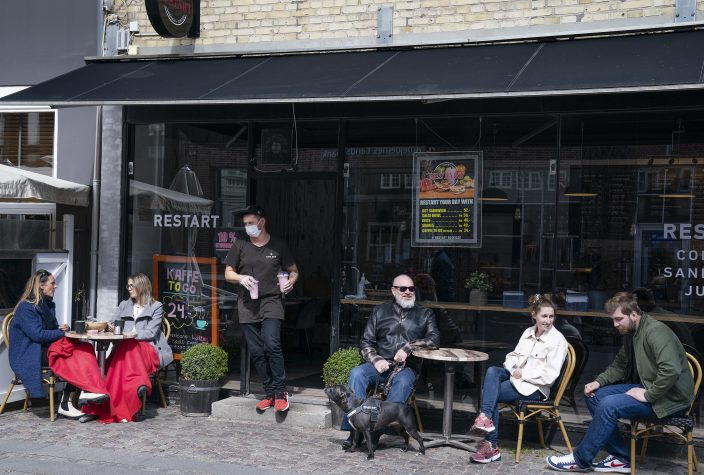 People sit outside a cafe for outdoor service in Roskilde Denmark, Wednesday April 21, 2021, as cafes and bars reopened on Wednesday. (Claus BechRitzau Scanpix via AP)

The New Delhi High Court on Wednesday ordered the government to divert the oxygen supply from industrial use to hospitals. Responding to a petition by a New Delhi hospital seeking their intervention, the judges said, “Beg, borrow or steal, it is a national emergency."

The government is rushing oxygen tankers to replenish hospitals.

The Times of India newspaper says that the previous highest daily case count of 307,581 was reported in the U.S. on Jan. 8.

— German lawmakers have approved a proposal by Chancellor Angela Merkel’s government to mandate uniform restrictions in areas where the coronavirus is spreading too quickly.

— A government official says France is about to impose new entry restrictions on travelers from India, in order to fight a contagious coronavirus variant spreading in that country.

SANTA FE, N.M. -- New Mexico health officials say they are preparing to respond to pockets of vaccine hesitancy in some communities as overall interest increases in receiving the vaccine for COVID-19.

State Health Secretary Tracie Collins said Wednesday that statistics on those trends are being reviewed this week. New Mexico is among the top states for immunization rates with nearly 40% of the population fully vaccinated.

Collins said the state is exploring the recruitment of “community champions” — trusted residents of regions with vaccine hesitancy who can address concerns about safety and efficacy. Question-and-answer style town halls are also a possibility. And video testimonials about coronavirus vaccines already have been recorded.

“We’ve got a lot of work we’re going to be doing these next few weeks to really get ahead of this vaccine hesitancy,” Collins said.

Human Services Secretary David Scrase added that physicians and other direct medical providers also have a crucial role to play in allaying fears.

“It really is more, I think, about giving people the opportunity to have a conversation about what their concerns are ... and work through those,” Scrase said.

ANNAPOLIS, Md. — Maryland Gov. Larry Hogan says the state is stepping up efforts to get people vaccinated against the coronavirus.

The governor said Wednesday that the “No Arm Left Behind” initiative will involve all state agencies and a variety of private companies.

The governor says demand for shots is still high but the state is having to get more creative in using its vaccine supply.

ROME — The Italian government is opening cinemas, theaters and concert halls to limited numbers of spectators in regions with the lowest level of contagion starting next Monday, while confirming the opening of outdoor restaurant dining for lunch and dinner.

Limits were set with a maximum 500 people indoors and 1,000 outdoors.

This is the first national loosening of restrictions since the fall surge and the arrival of quick-spreading variants of the novel coronavirus. The level of contagion has slowed as the vaccine campaign progresses, but virologists are warning that the government is sending a message of “everything open” before the situation is under control.

Cabinet ministers meeting Wednesday also confirmed the current 10 p.m. curfew. That drew ire from the right-wing League, which said it would abstain when the measures come to parliament for a vote.

MIAMI — One of Florida’s largest hospital networks announced Wednesday it would no longer administer first vaccine shots to the public after the end of the month because of a “decrease in demand.”

The Seattle Times reports that state Health Secretary Dr. Umair Shah said Wednesday the state’s new goal is 90,000 vaccines daily if the federal government can provide them. Earlier this year, the goal was 45,000 shots daily.

Shah also said the state is hearing some concerns about the willingness of Washington residents to seek vaccines, with many scheduled appointments going unfilled. Everyone over age 16 is now eligible for vaccination and a third of the state’s residents have received at least one dose.

JOHNSTON, Iowa — Gov. Kim Reynolds implored Iowans on Wednesday to get vaccinated for COVID-19, but she refused to acknowledge that slowing demand for the shots is greatest in Republican parts of the state or that there’s a political aspect to the trend.

After 43 of Iowa’s 99 counties this week declined additional shipments of vaccine because of a decrease in demand, Reynolds, a Republican, promoted the vaccination effort by sharing the stage at her weekly news conference with National Guard Adjutant General Ben Corell, who is still recovering from a COVID-19 infection last winter. She also noted that Republican Lt. Gov. Adam Gregg would be vaccinated later this week in Sioux City.

Of the 43 Iowa counties to decline vaccines, the Centers for Disease Control and Prevention has identified 12 as having high rates of coronavirus transmission. Voter registration information shows that all 12 are heavily Republican counties

The latest study looked at recent infections in about 75 Chicago skilled nursing facilities. Nearly 8,000 residents and nearly 7,000 staff received two doses of vaccine at the facilities. In those fully vaccinated, health officials detected 22 breakthrough infections. Most experienced no symptoms, but two were hospitalized and one died.

Other statistics have suggested breakthrough rates are significantly lower. However, residents of nursing homes and other skilled nursing facilities tend to be older and more frail than the overall population, and some studies have suggested vaccine effectiveness can be lower in that group.

The Centers for Disease Control and Prevention on Wednesday posted the study online.

Last week, federal officials reported about 5,800 breakthrough infections have been seen in about 40 states that have reported such data. That count included 74 deaths.

MISSION, Kan. — About three-quarters of Kansas counties have turned down new shipments of coronavirus vaccine at least once over the past month and several have done so for four straight weeks, state data show.

The numbers, however, don’t account for doses that may have been shipped through the federal government to pharmacies and some clinics.

Data show that Just 37% of the state’s residents are at least partially vaccinated. That percentage is far from where the state needs to get to reach a level of herd immunity that would make it difficult for the virus to spread.