Having rapidly mobilized to thwart rebel clubs from joining a breakaway European competition, the Premier League is taking steps to prevent the so-called “Big Six” from attempting something similar in the future.

England's biggest clubs have often used threats of joining a Super League as a power play in the past but now find themselves badly weakened after such a venture collapsed within 48 hours of being launched amid a torrent of outrage from fans, players, government and even royalty.

Now the Premier League is working to neuter those clubs further with punishments and measures to stop them playing the same bargaining chip again, a person with knowledge of the situation told The Associated Press. 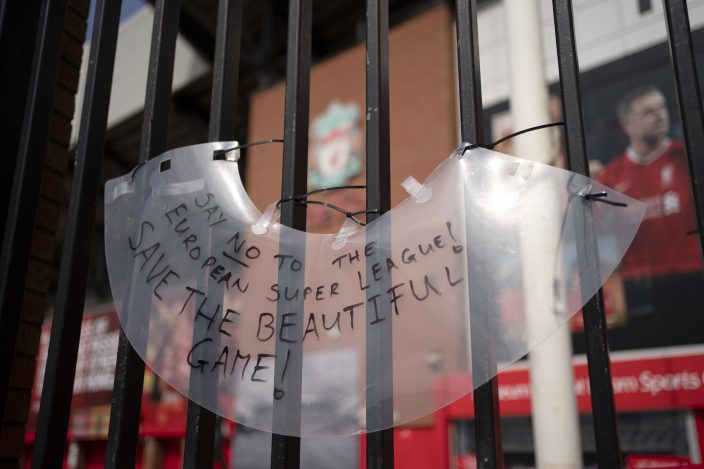 The league is considering sanctions aimed at the club officials who plotted to join the breakaway venture, rather than punishing the teams themselves, the person said. They spoke on condition of anonymity to discuss private deliberations within the Premier League.

Varying degrees of public apologies have come from Arsenal, Liverpool, Manchester United, Manchester City and Tottenham, although not Chelsea, since quitting the 12-team Super League project on Tuesday night in the face of a growing public backlash.

But that won’t stop the Premier League trying to remove club executives from key committees like the one assessing the sale of television rights — which gave them access to commercially valuable insight as they schemed to create a new competition with Spanish and Italian clubs away from the UEFA Champions League structure.

A governance review by the Premier League will also explore measures to leave clubs exposed legally if they go against the collective by trying to revive a Super League — with Juventus chairman Andrea Agenlli and Real Madrid President Florentino Perez still clinging on to the prospect.

The big clubs previously threatened a Super League in 2016 and leveraged that to secure four automatic Champions League qualification places for England, Spain, Italy and Germany each year.

Agnelli also tried to turn the Champions League into a largely closed competition in 2019 with up to 24 locked-in places before smaller clubs and European domestic leagues marshaled opposition.

Agnelli served as head of the European Club Association until Sunday night, when he resigned in connection to the Super League plans being announced. Two days earlier, he had promised UEFA President Aleksander Ceferin that he and the other elite clubs were backing UEFA's plans for a reformatted Champions League.

When their true intentions emerged, Premier League chief executive Richard Masters rallied the other 14 Premier League clubs, the Football Association and British government to repel the Big Six who had spent years throwing its weight around the English game.

The Super League rebels went ahead with their announcement despite being publicly warned after a leak on Sunday afternoon that they would be prevented from playing in domestic competitions if they formed a European competition they didn't have to qualify for each season.

The Premier League is looking at tightening the regulations to make it easier to expel any club that tried to pursue a breakaway in future — especially with Real Madrid and Barcelona not giving up on the idea.

Italy's Serie A and Spain's La Liga, meanwhile, seem to be taking it easier on their clubs.

The Italian soccer federation said Wednesday it will not punish Juventus, Inter Milan and AC Milan for their involvement in the failed breakaway attempt.

La Liga President Javier Tebas hinted that Barcelona and Real Madrid won't face any sanctions either, but said stricter rules are intended to puncture hopes of a breakaway.

“The most important thing is these clubs have been sanctioned by their own fans,” Tebas said in Madrid on Thursday. "Rather than sanctions we are looking at protective measures so that this doesn’t happen again. They haven’t abandoned LaLiga. They abandoned the idea of European competition.”

It was the English clubs who were the first to pull out of the Super League project — with Chelsea and Manchester City withdrawing on Tuesday, followed by the other four. By then it had been publicly opposed by Prince William, who is the Football Association president, and Prime Minister Boris Johnson, who threatened to introduce laws to stop the English clubs joining a Super League.

Manchester United manager Ole Gunnar Solskjaer had to go and speak to a protest group of around 20 supporters who gained access to the team's training ground on Thursday morning demanding that the owning Glazer family sell the club.

“This has given big lessons and it shows the importance of football in the world,” Arteta said. “And it shows that the soul of this sport belongs to the fans."