Anthony Pettis could have kept fighting in UFC or considered other mixed martial arts promotions where the potential of a championship fight might be years down the road -- if it developed at all.

Pettis instead became the latest former MMA champion to sign with Professional Fighters League, which competes in a seasonlong format that includes playoffs and championship fights. Oh, and for the champion of each weight class -- a $1 million prize. 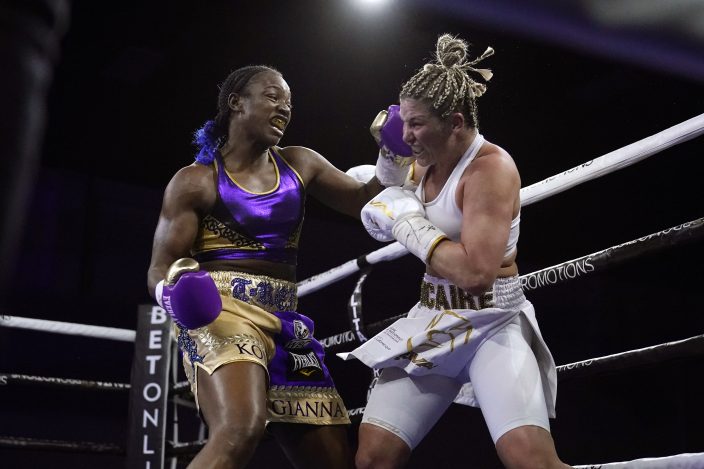 FILE - Claressa Shields, left, hits Marie-Eve Dicaire with a left during the fifth round of a boxing bout for the women's super welterweight title in Flint, Mich., in this Friday, March 5, 2021, file photo. The Professional Fighters League, the only MMA organization with a season format, returns after a year away for a card in Atlantic City. Kayla Harrison and Claressa Shields are among the stars expected to have breakout seasons this year and former UFC champion Anthony Pettis makes his PFL debut on Friday night, April 23, 2021. (AP PhotoCarlos Osorio, File)

Pettis (24-10) fights in the main event of PFL’s season in Atlantic City, New Jersey, on Friday night when he takes on Clay Collard (18-8) in a 155-pound bout broadcast on ESPN2.

The fight marks a new beginning for Pettis after nine years under the UFC banner where he won the lightweight crown and became the first champion to appear on a Wheaties box.

It’s also a restart for PFL after the league went on hiautus in 2020 because of the pandemic. It largely stayed out of the MMA spotlight while UFC and Bellator pressed on, running cards in bubbles or overseas without fans.

Pettis is the most well-known of the fighters on the four-fight main card at Ocean Casino Resort but PFL came into 2021 full of big names -- inside and out of the cage. Former UFC heavyweight champion Fabrício Werdum signed with PFL and former Bellator welterweight champ Rory MacDonald is set to make his debut after signing with the league in 2019.

Two-time judo Olympic gold medalist Kayla Harrison is back as the face of PFL after winning all seven of her fights for the company. Two-time Olympic boxing gold medalist Claressa Shields makes her MMA debut June 10.

PFL also added football Hall of Famer Ray Lewis in an advisory role to recruit talent, and the company announced Thursday that rapper Wiz Khalifa has joined the ownership group.

“He’s an owner," CEO Peter Murray said. "He’ll play a role. For the brand, he’s going to help us open the aperture of our brand by bringing in music culture, fashion culture.”

The remaining regular-season cards take place April 29, May 6, June 10, June 17 and June 25. The league has yet to announce sites for its playoffs and championship night, which had been held on New Year’s Eve at Madison Square Garden.

PFL -- which has boasted it’s the No. 2 MMA company in the world -- raised $65 million this year in new financing. The promotion was known as the World Series of Fighting from 2012 to 2017, when it was bought and rebranded. The PFL has six weight classes and held full-season competitions in 2018 and 2019.

Murray said the financing will be spent in part on talent acquisition and expanding its reach, including staging fights outside the U.S. The PFL said it is available in 160 countries and has seen its popularity rise domestically in large part because of live, prime-time events on ESPN-plus and ESPN2.

“It’s much more than an idea," Murray said. "We’re in active conversations with a number of different countries."

PFL also has partnered with a sports betting company that allows fans to bet on everything from winners to prop bets like fastest strike and kick speed.

“We are advancing the sport,” Murray said. “There’s room for more than one leader in the sport."

Pettis, whose younger brother fights for Bellator, says he had to change his approach in training camp.

“We didn’t go so hard in this camp,” Pettis said. “We went hard when we needed to but it wasn’t all-out, all we can do because I’ve got to fight again in seven more weeks. It was very more strategic.”

Shields’ anticipated debut fight is not part of the promotion’s seasonlong competition format.

“She trusts our team to develop her into the sport,” Murray said. “We also give her flexibility. Her goal is to be a two-sport champion in boxing and MMA."

Lance Palmer and Natan Schulte are fighting for their third straight $1 million prize, and Schulte stands in Pettis’ path on the road to the lightweight crown.

“I was the champion in every organization I fought in, so I always had that target,” Pettis said. “There’s some good talent in this division. I’ve got to be smart, I’ve got to be sharp.”

The U.S. Department of Justice exp ...