It may be hard to believe that there are still many “firsts” left to check off after 93 years of the Academy Awards, and yet this year there were a handful for Asian actors and filmmakers.

The historic gains spotlight where the organization has made progress and where there is still work to do, especially after a year in which Asian Americans were increasingly targeted in racist attacks. 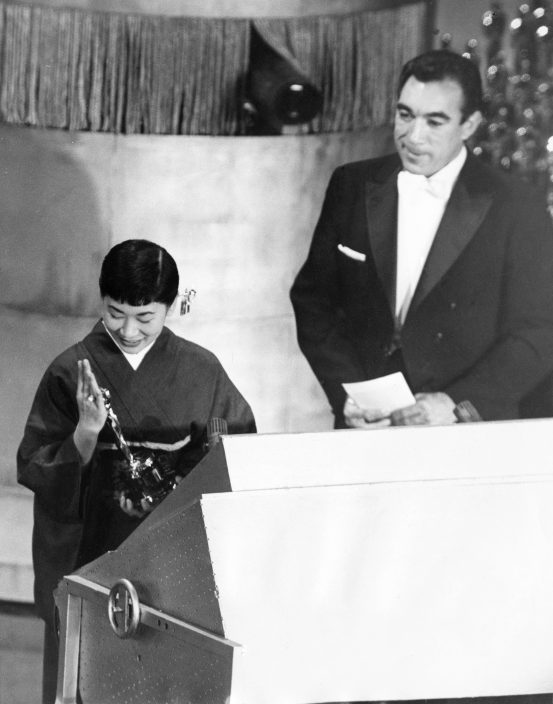 FILE - Japanese actress Miyoshi Umeki, accepts her Academy Award for best supporting actress for her role in "Sayonara," as presenter Anthony Quinn looks, during the Academy Awards ceremony in Los Angeles on March 26, 1958. Umeki was the first person from Japan to win an Oscar. (AP Photo)

Nancy Yuen, author of the book “Reel Inequality: Hollywood Actors and Racism,” said the nominations this year are exciting. The actors are being recognized for roles, Yuen said, “That are not demeaning, that aren’t fitting into stereotypes that are problematic. They are fully complex human beings.”

That hasn’t always been the case for Asian actors who have broken through to the Oscars. The first and last time an Asian woman won for acting was in 1958 when Japanese actor Miyoshi Umeki won for her supporting role in “Sayonara.” In 1985, Haing Ngor became the first Asian man to win a supporting award for playing Cambodian journalist Dith Pran in “The Killing Fields.” And none have won in the leading category since Ben Kingsley, whose father is Indian, won for “Gandhi” in 1982. Yul Brynner, who was born in Russia, won for “The King and I” in 1957.

It’s coupled with the fact that there have been multiple Asian-led best picture winners that didn’t receive any acting nominations. In the history of best picture winners, it’s only happened 12 times, and three of them had predominately Asian casts: “The Last Emperor,” “Slumdog Millionaire” and last year’s “ Parasite.” Ang Lee’s “Crouching Tiger, Hidden Dragon” and “Life of Pi” were also nominated for best picture without a single acting nod. 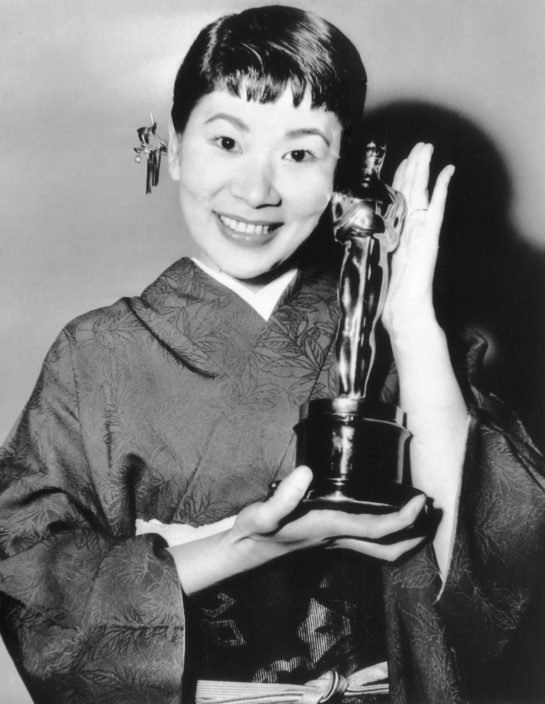 FILE - Japanese actress Miyoshi Umeki, poses with her Academy Award for best supporting actress for her role in "Sayonara," during the Academy Awards ceremony in Los Angeles on March 26, 1958. Umeki was the first person from Japan to win an Oscar. (AP Photo)

“I think Asian Americans and Asians in the Western diaspora tend to be seen as invisible and background. They are window dressing,” Yuen said. “It leads to not recognizing Asians as fully complex actors and characters.”

Yuen andothers noticed with “Parasite,” that people largely referred to the small ensemble as “they” rather by individual names: Chang Hyae Jin, Cho Yeo Jeong, Choi Woo Shik, Lee Jung Eun, Lee Sun Kyun, Park So Dam and Song Kang Ho. Whether a Western blind spot, a racial bias or some combination of the two, it’s at least part of the reason for the systemic oversights.

“People don’t bother to even try to learn,” Yuen said. “That added layer of challenge, I think, makes it that people in the academy aren’t even going to be nominating someone in those films unless they are already a known entity.” 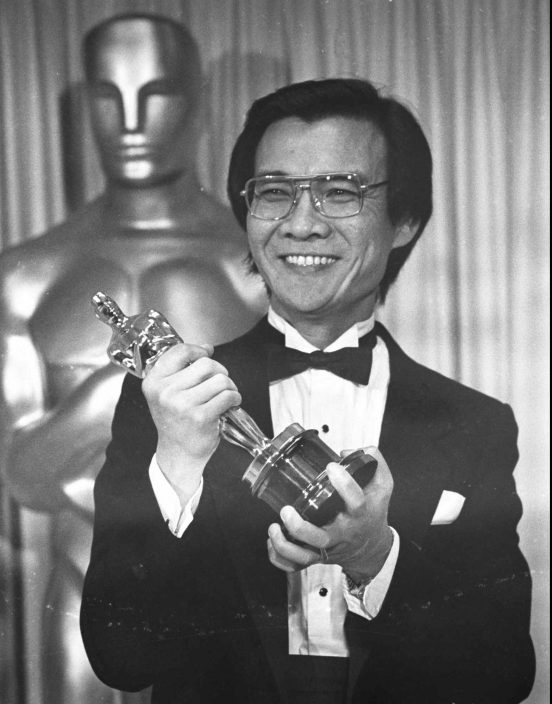 FILE - Haing S. Ngor, winner of the best supporting actor Oscar for his role in "The Killing Fields", poses backstage at the 57th annual Academy Awards in Los Angeles on on March 26, 1985. (AP PhotoFile)

Yuen, who grew up in the United States and also found herself having to look up the names on occasion, said that she tried to always single out the actors if she was going to compliment “Parasite” or share a gif or an image on social media.

And the biases aren’t just relegated to the nominations. In 2016, the first show after #oscarssowhite became a household phrase, host Chris Rock brought out three Asian children dressed up in suits for a now infamous joke about accountants and iPhones.

It was not well-received at the time and provoked a lot of immediate social media backlash from people like actor Constance Wu and basketball player Jeremy Lin. The academy even apologized and pledged to be more culturally sensitive. 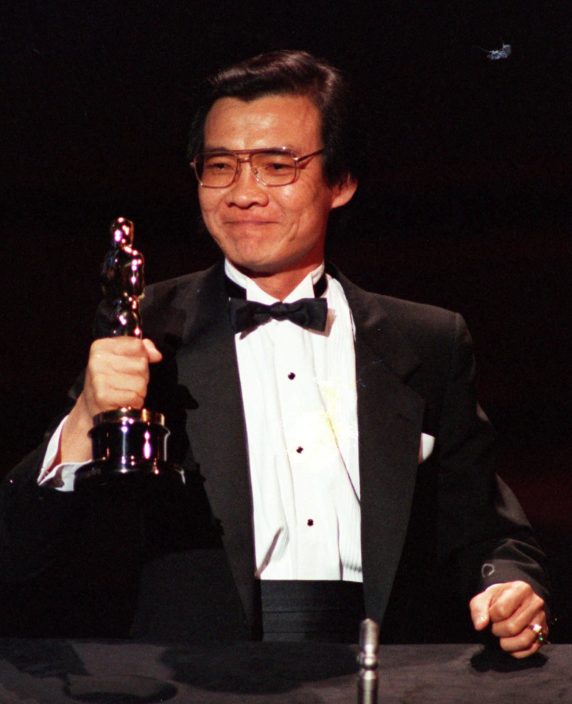 FILE- Haing S. Ngor, accepts the award for best supporting actor Oscar for his role in "The Killing Fields", at the 57th annual Academy Awards in Los Angeles on March 26, 1985. (AP Photo, File)

The strides at the Oscars also come after over a year of a pandemic-fueled rise in racially motivated attacks on Asian Americans. It was not lost on anyone that the day after the Oscar nominations, a white gunman was charged with killing eight people, most of whom were Asian women, at Atlanta-area massage businesses.

“It was this kind of high of like, oh, my gosh, Asians are finally being recognized for their excellence. And then there’s this horrific hate crime that really just shook everyone. It feels like we’re under the spotlight, but for polar opposite reasons,” Yuen said. “One doesn’t cancel out the other. The positives are not canceling out the racism. At the same time, I think it’s bringing awareness to the racism. And the fact that Asian excellence is being recognized, the more voice and platform Asian Americans have to be able to speak out against the hate.”

The actors themselves have complex feelings about the moment and the “firsts.” 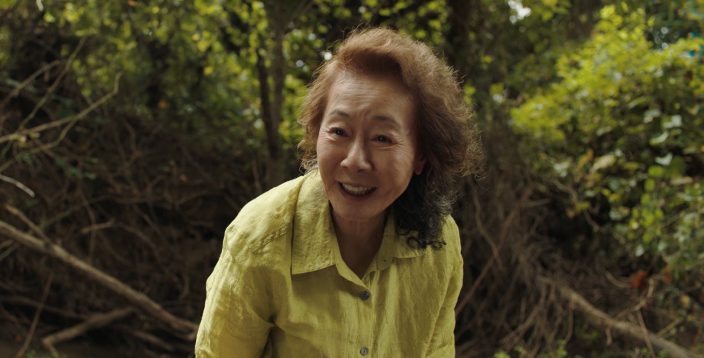 This image released by A24 shows Yuh-jung Youn in a scene from "Minari." (A24 via AP)

Youn told Deadline that, “It’s very stressful. It’s not like I’m representing the country by going to the Olympics, but I feel like I’m competing for my country.”

In an interview with Variety before the nominations announcement, Yeun said: “As great as it would be to set a precedent or be part of a moment that breaks through a ceiling, I personally don’t want to be ensnared by that moment, either.”

As for Ahmed, speaking to The New York Times on the morning of his nomination, he said, “What’s most important is if it’s meaningful to other people. I just think the more and more people that can find themselves celebrated and included in these moments, the better.”

Part of the reason for the gains could be due to diversification efforts within the Academy’s membership ranks. After the 2015 and 2016 #oscarssowhite spotlight, the organization vowed to double the number of women and people of color in its voting body by 2020. They hit that milestone last summer, but the organization is still 81% white and 67% male. In 2024, they’ll introduce new inclusion standards for best picture hopefuls.

“Historically there were pockets of the academy that were more diverse, particularly internationally, specifically the directors branch,” said Turner Classic Movies host and Oscars expert Dave Karger. “But the academy’s attempts at diversification have opened the door for more worthy nominees, particularly Black and Asian nominees to be represented, not just foreign white nominees.”

Now the big unknown is whether this year actually represents a sea change.

“You have to see whether it is just an uptick, a random year, or is it actually the beginning of a pattern of change?” Yuen said. “And we really don’t know yet.”

Even in a year during which the NB ...