In Columbus, Ohio, it took five hours. In North Carolina, it requires a court order. In New York City, police can wait up to 30 days — sometimes longer.

As the U.S. debates the future of policing, the policies that govern the release of body camera footage still vary widely across the nation, and pressure is building on law enforcement agencies to act swiftly, even if it means releasing videos before investigations have barely begun. 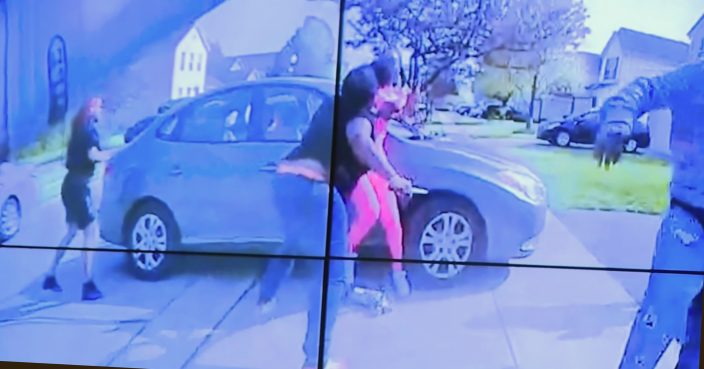 FILE - In this April 20, 2021, image from body camera video played during a news conference held by the Columbus Police Department, 16-year-old Ma’Khia Bryant, foreground, wields a knife during an altercation before being shot by an officer in Columbus, Ohio. The footage was released hours after the shooting. As the U.S. debates the future of policing, the policies that govern the release of body camera footage still vary widely across the nation. (Columbus Police DepartmentWSYX-TV via AP, File)

Columbus Mayor Andrew Ginther, who made outfitting police with body cameras a priority of his 2015 campaign, said it was “critically important” to act fast to make the footage public after an officer fatally shot a Black 16-year-old girl on Tuesday as she swung a knife at another girl.

“We all knew there were a lot of things being said and shared out in the community that may or may not have been consistent with what we have seen with our own eyes here,” Ginther said Wednesday. “In times of crisis, it’s very important to be as transparent and as responsive as possible.”

That isn’t the case everywhere.

In New York City, police can wait up to 30 days to release body camera footage when deadly force is used, but that deadline is not always met. The state attorney general, who recently assumed responsibility for deciding whether to prosecute deaths caused by police, has pledged to release body camera videos quickly in cases it investigates.

In Los Angeles, a similar policy requires the release of video of fatal police shootings and other critical incidents within 45 days. The police chief or police commission can order the release earlier if it’s deemed to be “in the public interest.”

It’s even harder for the public to see body camera footage in North Carolina because those recordings are not considered public records. Instead, the media and public must request the release, which often does not happen unless a trial judge orders it — a process critics say limits transparency.

In Portland, Oregon, there is no body camera footage to see. The police department there is one of the few big city police forces that has yet to equip its officers with body cameras. City leaders say they support adopting the technology but do not have money to pay for it.

In general, “there just seems to be no reason not to release 99% of the body cams in these situations,” Alpert said. “Unless there are faces you’ve got to blur out and other things you’ve got to do, I don’t understand why they don’t release body cam sooner than later.”

More than 80 percent of departments with more than 500 officers are now using body cameras. The figure is typically lower among smaller departments because of the high cost of storage.

Within individual police departments, there can be major inconsistencies in the release of footage.

In New York City, for instance, the police department would sometimes release body camera clips within hours when it suited the department's interests in justifying use of force or explaining an event. Other times, as in the fatal 2019 shooting of a man in apparent mental health crisis, the footage was kept from the public for more than a year and a half.

Without a consistent policy on releasing body camera footage — along with 911 calls and dash cam video — police departments run the risk of jeopardizing ongoing investigations into officers’ actions, said David Klinger, a former police officer who teaches criminal justice at the University of Missouri-St. Louis.

Releasing a video before an officer has given an official statement or before all witnesses have been interviewed has the potential to muddy their own recollection of the events, Klinger said, giving a defense lawyer an opportunity to challenge any potential discipline or criminal charges.

If that happens, “you have now damaged the potential for prosecuting this officer,” Klinger said.

Alpert, a federal monitor for the New Orleans Police Department and an adviser to the Portland police, said hesitancy among some departments to release body camera footage may stem from the power those images have to sway public opinion.

“You get to see a very, very small amount of the information, and then you form an opinion on it, and it may or may not be accurate,” Alpert said, pointing to a colleague’s study showing how close-up body camera footage of an apparent fight was actually two men dancing.

In Columbus, which adopted body cameras five years ago, police have moved quickly to release shooting footage twice in recent months — once to disapprove of an officer's action and then again to explain why a different officer acted the way he did.

On Dec. 23, the agency released footage of Officer Adam Coy fatally shooting Andre Hill as he walked out of a garage holding up a cellphone one day earlier. Additional footage showed several officers failing to come to the aid of Hill. Coy was fired shortly thereafter and has since been charged with murder. He has pleaded not guilty. Hill was Black and Coy is white.

On Tuesday night, police released footage of Columbus officer Nicholas Reardon shooting 16-year-old Ma’Khia Bryant as she swung a knife toward another girl, just about five hours after the shooting.

The national Fraternal Order of Police commended the quick action in a statement, calling it “a demonstration of what police transparency looks like — getting the facts out before the narrative can be distorted or disinformation takes hold in a community.”

Meanwhile in Honolulu, police have yet to release video from the fatal April 5 shooting of a 16-year-old boy despite taking just two days to make some footage public of the April 14 killing of a 29-year-old man. The department in the Hawaii capital has said it will not release footage of the 16-year-old’s killing because juveniles were involved. That prompted an oversight board to question why the department could not just blur their faces.

In Rochester, New York, police commanders delayed the release of body camera video of a police encounter that led to the death of Daniel Prude in March 2020. Emails released by the city last fall showed they feared a violent backlash if the video came out during protests over the police killing of George Floyd.

The video, finally made public by Prude’s family on Sept. 4, showed Prude handcuffed and naked with a spit hood over his head as an officer pushed his face against the ground, while another officer pressed a knee to his back. The officers held him down for about two minutes until he stopped breathing. He was taken off life support a week later.

Robert Saleh wrapped up his first ...