The stakes were clear to the two dozen police officers who gathered for a workshop with an ambitious and increasingly urgent mission — recalibrating the way police interact with the public in America.

The class took place the same week as jury selection for the trial of Derek Chauvin, the former Minneapolis officer who was convicted Tuesday of second-degree unintentional murder, third-degree murder and second-degree manslaughter in the death of George Floyd.

No one attending the conference would deny that the profession failed the day Floyd died with Chauvin's knee on his neck. They came to the classes with the idea that judo, the martial art with a deep global history and an imprint at the Olympics, but still shallow roots in the United States, might be able to help fix it. 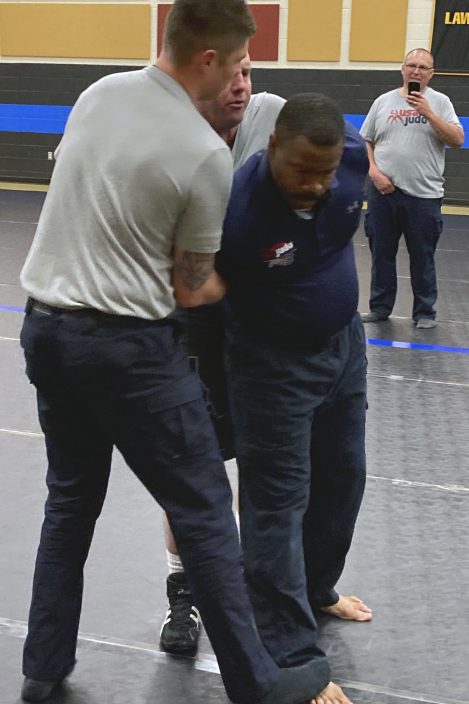 Matthew Maestas, left, of the Torrington, Wyoming Police Department and Ryan Rhoades, obscured at center, of the Meridian, Idaho Police Department practice a judo hold on instructor Taybren Lee of the LA Police Department during a training workshop on March 9, 2021, in Douglas, Wyoming. John Richard of the Glen Rock Wyoming Police Department captures the action with his camera phone. USA Judo is sponsoring training sessions for police departments throughout the country in hopes of preventing the use of deadly force when officers encounter possible suspects on the street. (AP PhotoEddie Pells)

“The social contract between police officers and the public is degrading a bit," said Joe Yungwirth, a trainer at the workshop who built his career doing counterterrorism work for the FBI and now runs a judo academy in North Carolina. "All law-enforcement officers I know, we feel we need to bring that back in line somehow.”

That's been a common refrain over a year's worth of police shootings and protests, all of which have been underscored by calls for police reform.

The judo project is, by any account, an outside-the-box idea. Because the sport, known by insiders as “the gentle way” of martial arts, has little emphasis on striking and is considered less violent than some of its brethren, some leaders in judo, and in policing, saw an opportunity to use the discipline to rethink officer training. Last summer’s headlines pushed these courses, which had been in development since 2018, to the top of the priority list. 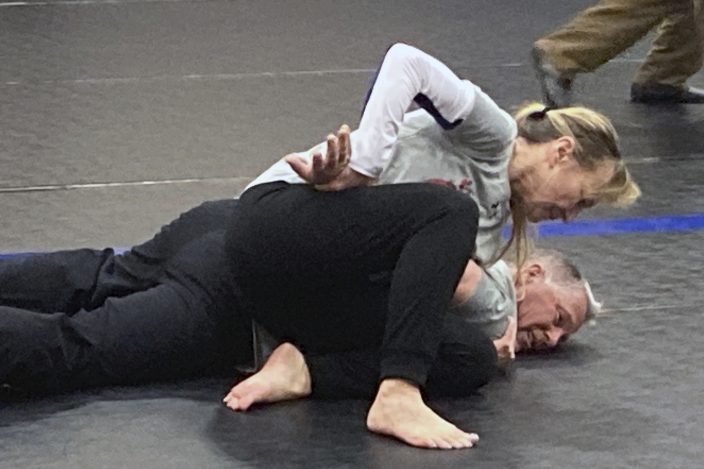 Eve Steffans of the Martial Arts Academy in Billings, Montana, practices judo techniques on Ed Thompson, a retired police officer, during a training session, March 9, 2021, in Douglas, Wyoming. USA Judo is holding workshops with police departments across the country to introduce them to judo techniques that could lessen the need for deadly force when officers have to apprehend people on the streets. (AP PhotoEddie Pells)

The main concept over the week of classes held at the Wyoming Law Enforcement Academy centered on teaching cops how to engage suspects verbally, then employ physical judo techniques if needed, to deescalate confrontations without using deadly force.

The goal is to avoid situations the likes of which led to Floyd's death and, just last week, to the death of Daunte Wright, whose funeral was Thursday. Wright was shot and killed by an officer who thought she was reaching for her taser when it was, in fact, her gun.

Jim Bacon, a former athlete on the U.S. judo team who now serves as a police officer in Lafayette, Colorado, says the most damning police-on-suspect encounters — many now caught on police body cameras or by onlookers holding iPhones — have this in common: “The cop resorts to higher levels of force than should’ve been used. If they have more skills, they might not have to rely on the gadgets on the belt,” he said.

The workshop also offered a window into the different role an Olympic organization, and maybe the Olympics themselves, can play in society at large. The USA Judo P3 Program is sponsored by USA Judo, the six-person operation in Colorado Springs, Colorado, that has helped Kayla Harrison and Ronda Rousey, now of Ultimate Fighting Championship fame, bring Olympic medals back home, but that also must constantly nourish its own grassroots system.

The national governing body has been losing ground on both fronts, most recently because of the pandemic, and over the years because of the growing popularity of other martial arts, such as jujitsu and taekwondo, that have kept judo in the shadows in America.

With an emphasis not on hitting, but rather on using leverage and body position to execute holds and takedowns, judo has long been easy to overlook, both in the days when Bruce Lee kicked and nunchucked martial arts into the American conscience, then more recently, when UFC octagons overshadowed boxing rings among a wide, big-spending cross-section of 21st-century sports fans.

“This hits a societal issue,” USA Judo CEO Keith Bryant said. “And for us, it has potential to get more people on the mat.”

In an exercise that cut to the core of the judo training, conference planners Taybren Lee and Mike Verdugo played suspects who were impaired, or mentally unstable, and challenged the officers to use judo to deescalate the situations. The scenarios were acted out as though they were happening in public, with pedestrians shooting the action from every angle on their phone cameras.

“If we can talk to you, if we can keep you up, that's going to change the whole visual, especially when people have their iPhones recording," Verdugo said. "This is a matter of keeping you up on your feet and not grinding you into the ground.”

Lee says the public would be alarmed at how little training the average police department provides to officers for street confrontations. And because so many more interactions are now caught on video, police are being scrutinized in ways previously impossible.

“It's not the officers' fault that they don't have the training," said Lee, an officer with the Los Angeles Police Department who also teaches judo for the youth-based Police Athletic League, a sponsor of the training program. “Sometimes, the departments haven't spent the money for the training, and in a lot of ways, the training hasn't caught up to the realities of the technology that's out there.”

The officers for the initial workshop came from Fort Worth, Texas; Billings, Montana; Meridian, Idaho; and other small towns scattered around the West. Another workshop for other cities is being planned for next month.

Spearheading this sort of endeavor is hardly the traditional role for leaders at an organization such as USA Judo, whose most high-profile mission is to help Americans bring home Olympic medals. But, as the past 13 months have shown, this could be an ideal time for the nonprofits that make up the backbone of the U.S. Olympic system to reinvent themselves.

USA Judo was among the 70% of U.S. national governing bodies that asked the government for loans under the federal government's Paycheck Protection Program during COVID-19. It cut two of its eight-person staff. It currently has one Olympic medal contender, Angelica Delgado, in a sport that fans will have to scour the listings to find among the 7,000 of hours of NBC coverage this summer.

Over the course of the pandemic, most of the 400 clubs that USA Judo sanctions across the country were forced to close or severely curtail operations. With no sanctioned events to offer — the NGB will hold its first national competition in 17 months this weekend in Salt Lake City — its membership has dropped by half, to about 5,000. By comparison, there are between 600,000 and 800,000 judoka in France, host of the 2024 Olympics, and between 150,000 and 200,000 in this year's Olympic country, Japan.

“People have always said, as soon as we get a gold medalist, then judo will grow” Bryant said. “But people thought that before. We had a gold medalist who won two gold medals (in Harrison). It didn't really move the needle.”

The unheralded and unglamorous art of police training might not, either. But Bryant sees judo as one of those rare sports — unlike, say, gymnastics or basketball — that has a spot both in a competitive venue and in real-world situations.

Among the program's task force members are 2004 Olympic judoka Nikki Kubes Andrews, now a detective for the Fort Worth Police Department. And Bacon, the former U.S. national team member who is now an officer in Colorado.

“The public wants police officers to be better trained,” Bacon said. “That's why we're trying to integrate judo, so we can be more effective in these situations without hurting the other person.”

USA Judo is offering free memberships to officers who participate in the training, and has hopes the police initiative could spark new interest in the sport. But Bryant readily concedes that growing the sport in America will take time — and that none of this is designed to bring home gold medals from Tokyo this summer.

He is also acutely aware that there are other ways to measure success during a difficult time in America.

“We sat down and started talking,” Bryant said, “and we agreed that when you look at George Floyd, and all these situations, we felt like if these officers had been trained in judo appropriately, it wouldn't have happened.”