David Peralta hit a three-run triple in a six-run 10th inning to finish with five hits and a career-best seven RBIs, and the Arizona Diamondbacks overcame six Cincinnati home runs to beat the Reds 14-11 on Thursday.

Carson Kelly followed Peralta with a two-run homer as the Diamondbacks opened a 14-8 lead. Arizona hung on in the bottom half to complete a three-game sweep that extended its winning streak to four.

The Reds lost their fourth straight, finishing a 2-4 homestand. 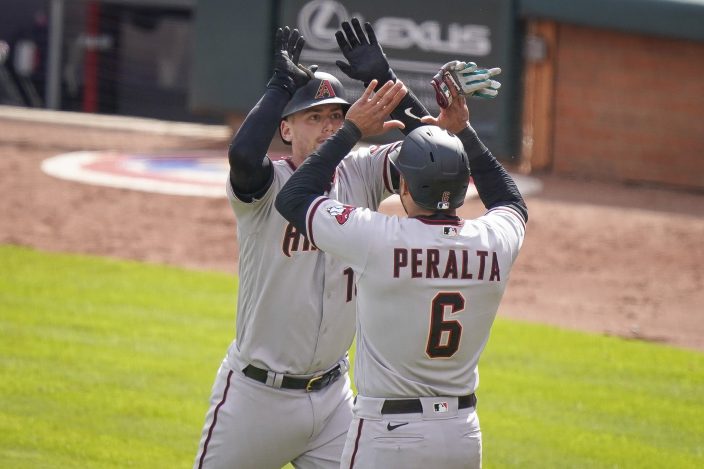 Cincinnati’s Jesse Winker had his third career two-homer game, Nick Castellanos hit his sixth home run of the season as he returned from a two-game suspension and Eugenio Suárez, Joey Votto and Jonathan India also went deep. All of the Reds’ home run came from among the top four spots in the batting order.

Peralta tied his career high with his third five-hit game. He hit a two-run homer in the fifth inning, had three singles and finished a double short of the cycle.

Phillip Evans kept Akil Baddoo’s drive to left field in the park in the seventh inning to help Pittsburgh escape a jam, and the Pirates scored twice in the eighth to beat Detroit.

Colin Moran and Erik González hit RBI singles with two outs in the eighth in the game played through snow flurries at times.

With the score tied at 2, Baddoo nearly put the Tigers ahead, but Evans reached above the fence in left, and the ball bounced off his glove and back into the field of play. Baddoo wound up with a double, and he didn’t end up scoring. With men on first and third and one out, Sam Howard (2-1) came on and retired Robbie Grossman and Willi Castro on flyballs.

Adam Frazier had three hits for the Pirates, including a one-out single off José Cisnero (0-1) in the eighth. Frazier advanced on a wild pitch and scored on Moran’s single off Gregory Soto to give Pittsburgh the lead for good. Richard Rodríguez pitched a perfect ninth for his third save, sending the Tigers to their sixth loss in seven games.

JaCoby Jones hit a solo homer for Detroit in the fifth.